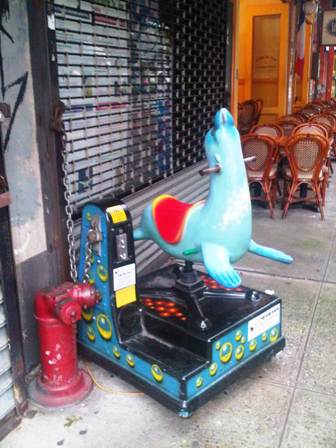 Manhattan kids are a sophisticated lot. Two boys in the apartment building next door are picked up for school every morning by a limo. Parents talk to their kids as if they're little adults. Five-year-olds dress like they just stepped out of a clothing catalog. And then there's the blue seal. These little Manhattan sophisticates still delight in rocking back and forth atop this old-timey coin operated critter chained to the front of our corner drugstore. Pure un-jaded kid!

I put out my second Mayor's Management Report last week. Two hundred and twenty pages of performance statistics! After working my tail off to make the thing more interesting, I was gratified to see we got two good size stories in the New York Times and a bunch of other press. Every imaginable political sensitivity rears its ugly head in the final stages of putting out the MMR. This time it was the head of a large department phoning City Hall the night before we published insisting that we remove a graph because it showed an undesirable trend that this commissioner deemed misleading. We lost the graph but the press picked up on the issue nonetheless. Ha!

When I took this job I decided that I would try to maintain an arm's length relationship with it. No more taking losses personally. And it has worked. I had no trouble sleeping the night I lost that little battle.  It's a funny business. Our ironclad policy is information transparency and yet, by their very nature, people close to even the most committed politician see it as their business to put a positive spin on anything that might negatively impact the boss.

NYC government has re-immersed itself in the business of changing people's behaviors to improve their health. For a long time, the focus was on cigarette smoking, now it's obesity. So, in anticipation of the now famous partial ban on large, sugary drinks, my observation team (SCOUT) was tasked with the job of spot checking city government vending machine to insure they were in compliance with "Beverage Vending Machine Standards." Those would be: 1) a maximum of two slots for beverages above 25 calories, regardless of the number of slots; 2) at least two slots must contain zero calorie water; 3) only water and seltzer may be displayed at eye level; 4) all high calorie beverages must be 12 oz.; 5) no advertizing for high calorie drinks on the machine; and 6) caloric information must appear on all containers. Oh, and anyone buying more than one high calorie drink receives a mild electric shock when reaching in the machine for the second container. (Kidding.) One might wonder why we're pushing bottled water given the enormous waste associated with packaging water but that's the yin and yang of attempting to legislate behavior.

Last month, Pat and I went to a production of "Richard III" in Riverside Park. The "stage" was a large terrace adjoining a long set of stairs leading up to the Soldiers and Sailors Monument. Very cool setting and a stellar production. Just one small problem - the front of the "stage" was, in real life, a walkway to and from Lower Riverside Park. So in the middle of a particularly dramatic scene a woman with pooch walks right between the audience and the performance. I'm thinking, "Man, I'll bet she was embarrassed!" Fifteen minutes later, she walks back through the play from the other direction, totally oblivious.

What's that funny structure that suddenly appeared in the desolate enclosed courtyard of our building? Why a sukkah, of course. Also known as the "holiday hut," a sukkot is a temporary structure where some of our neighbors are taking their meals during the sukkah thanksgiving observance acknowledging the hardships that Jewish people experienced after their exodus from Egypt. During this week-long holiday, one sees little huts wheeled around town by Hassidic boys to allow people to take a moment out of their busy lives to contemplate their good fortune. All meals are shared in the sukkah, come rain or shine. It's a lovely tradition.

Well, that's all for now. Pat and I leave for China today. I'm speaking about NYC performance management at Lanzhou University and then we're off to the Tibetan region of Gansu province for horse trekking and monastery circumambulating.