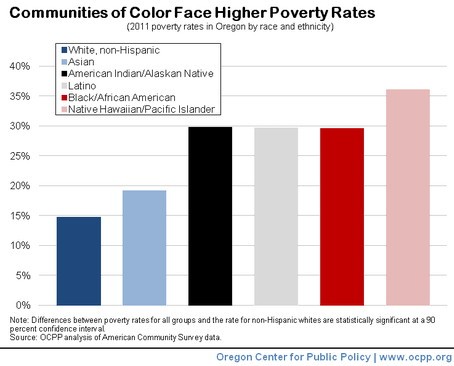 Poverty in Oregon increased yet again last year, and poverty levels are particularly alarming among children and communities of color. It's time for Governor Kitzhaber and state lawmakers to develop a plan to reduce poverty.

The rise in poverty has a direct and immediate cost to Oregon. Last year about 662,000 Oregonians were living in poverty -- 66,000 more than the year before. The increase in the total number of people in poverty adds to the demand for public services.

Child poverty, in particular, has long-term, negative consequences for our state. It's well known that poverty makes it harder for children to thrive in school, and that economic hardship and family instability early in life can lay the groundwork for more costly social problems down the road and undermine efforts to achieve opportunity and prosperity.

Rather than plotting to create new tax breaks for the rich and for profitable corporations, Governor Kitzhaber and the Oregon legislature should devise a plan to confront poverty.

Today's Census Bureau release is based upon the results of the 2011 American Community Survey (ACS). The ACS generates more reliable estimates and comparisons of state-level data than the Current Population Survey released earlier in September.