Portlander in New York: What's a Guy Supposed to Do Without a Backyard? 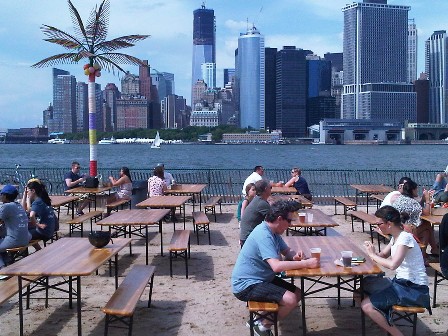 Perhaps the person we're the most in tune with since moving to New York is someone we've yet to meet - Thumper. Of course, that's not her real name but we don't even know that. You see, she's our upstairs neighbor and she has a mighty stride. When Thumper walks across the bedroom, directly above ours, the furniture rattles. When Thumper gets up in the morning she walks very quickly, back and forth, across the bedroom floor many times, rattling the furniture as she goes. In the evening and on weekends, she slows down a bit but still the thump-thump-thump.

I've tried to spot her (She walks way too fast to be a man) on the elevator in the morning. A couple of times a woman has been on the elevator when it has stopped on the seventh floor before stopping for me on 6 but, disappointingly, none could compare to Thumper's stride when leaving the elevator. So the mystery remains.

Generally, we've adjusted well to apartment living. We've met enough of our neighbors to have reason to stop and chat now and then. One of our doormen, Peter, who is the informal building counselor/mayor, has taken us under his wing so we hear lots of stories about the building like the time Bill Clinton dropped in to use the bathroom. It's not unusual for a resident to have lived in the building for decades and Peter has worked here for 30 years so there's lots to talk about.

One thing that's missing, however, is the backyard. What's a guy supposed to do without a backyard? Well, it turns out, NYC has lots of backyards. They just have to be shared. Last Friday Pat and I met for margaritas after work at the 79th St. marina overlooking our gorgeous Hudson River backyard. Recent Oregon friends, Bruce and Suzanne, accompanied us to one of NYC's most fabulous, and least known, backyards - Governors Island.  Sitting just a stone's throw from downtown Manhattan, this abandoned military installation is fantastic. Open on weekends via a free ferry from both Manhattan and Brooklyn, it features lots of free events, bikes for rent, fabulous old-timey architecture and even a palm tree fringed beach, (see picture) but most New Yorkers are simply unaware of the place.

(Speaking of unaware New Yorkers, I was the unaware one last time I wrote. The New York Botanical Garden is in the Bronx, not Queens. Duh!)

Work is way better these days. I'm back in the swing of things. My projects are all going well. The deputy mayor recently introduced me to someone as his "data guru." My position has allowed me to inch my way back into the larger government performance world so I get occasional invitations to lecture students, speak at conferences and write papers. Despite my up close and personal misgivings about how the city is managed, New York City government has a very strong reputation for good management and innovation and I'm the beneficiary.

I am constantly amazed by the size of the issues we deal with here. I learned the other day, that, since the beginning of this administration in 2002, the inspectors on the sidewalk and street cleanliness team that I manage have conducted 4.2 million block segment assessments! My analytics group has to sort through over one million records to determine if the City is writing more violations for businesses now than at the beginning of the administration. We're working with the Law Department to see if we can figure out how to avoid some of the lawsuits that cost the city $500 million a year. Fun stuff but scary, big numbers.

Work was even totally enchanting one day when a staff member and I went to a senior center to observe how the management counts meals served; one of the measures we report. As we entered the center in Chinatown, we were greeted by a band of seniors banging on drums. For the next hour we were treated to group after group, including a group of operatic seniors, showing off the activities of the center. Turns out the way they count meals served is that they serve the maximum allowable every day (300). Oh.

Without a doubt, the most bizarre experience I've had since my last missive is seeing the guy who panhandles with very large snakes he lets loose on the ground. Honestly, the snakes were kind of spread in front of him in Washington Square but not under any kind of restraint. I must have had a particularly interesting smell as one of the smaller snakes came straight towards me tongue out. As smelling often leads to tasting, I beat a hasty retreat.

With of Manhattan's amazing physical and cultural attributes, it's easy to forget that most people here live pretty normal lives. I was struck last week when Pat mentioned that she was getting together with a friend after the woman dropped her granddaughter off at school. OK, so I still can't get over the fact that we have friends with grandchildren, but still she was doing the most mundane thing - before going off to visit the Metropolitan Museum of Art, a world famous cultural icon. Normal, I guess, tinged with way cool.