Obama Did Not Take Easy Way Out on Same-Sex Marriage 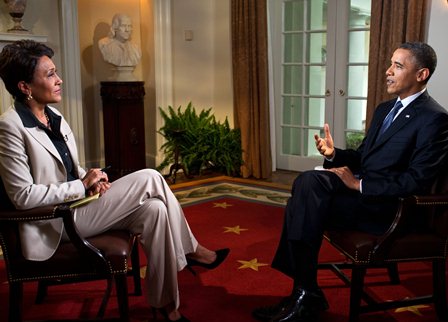 One point that is absolutely clear is that the President of the United States is no political coward.  President Barack H. Obama made history by backing historic health care reform across America when everyone thought that successful political battle would negatively hurt his chances for re-election.  But to President Obama's leadership credit, he put the urgent health needs of the poor and others who had been locked out and priced out of access to health before fulfilling his own political ambition.

Now President Obama has become the first sitting U.S president to publicly and explicitly state without any hesitation that he supports the equal justice and civil rights protection and affirmation of gay rights on the issue of same sex marriage. With a sense of thoughtful introspection and discernment, President Obama stated, "At a certain point I've just concluded that, for me personally, it is important for me to go ahead and affirm that I think same-sex couples should be able to get married."

On these issues and on other matters in terms of both domestic and international policies, President Obama's courage is unprecedented. From ending the war in Iraq , supporting women's rights to equal pay, to taking a caring position about the murder of Trayvon Martin, Obama has shown a willingness to stand up, speak out and to take definitive action even in the face of political and social risks.  What has emerged and evolved during the last four years is an irrefutable profile in presidential courage and leadership.

Courage is an important attribute that eludes too many leaders, including politicians.  It has been customary for elected officials to first test the magnitude of the political winds before taking a public position on polarizing issues. That is why I support getting money out of politics in America because too many officials get bought off or priced out of having the courage to do what is right on the issues for freedom, justice and equality for all people.

During the socially and politically dangerous height of the civil rights movement during the 1960s, Dr. Martin Luther King Jr. emphasized, "We must build dikes of courage to hold back the flood of fear."  Dr. King was both a religious and a civil rights leader.  In 1967, when he came out publicly against the Vietnam War, there were many even in the Black American church community who stood in opposition to Dr. King's bold courage.  Dr. King was fearless and courageous.

Today, millions of Americans have benefited from the sacrifices and steadfast commitments made decades ago by Dr. King and the Southern Christian Leadership Conference, the NAACP, the National Urban League, the National Conference of Black Churchmen, the National Council of Negro Women and many other tenacious groups that boldly stood up and made a difference not just for Black Americans, but also for all people.

President Barack Obama has emerged from the civil rights tradition of courage and leadership.  When former President Nelson Mandela in South Africa called for reconciliation in the context of the liberation of South Africa from its brutal history of apartheid, there were many who did not stand with him. Thus, the standard for courageous leadership is not just an American standard, it is also a global one, a measure of a leader's determination to be truthful and committed to the principles of equal justice and freedom.

The issue of same-sex marriage is a very divisive issue within the African-American community, especially in the Black church. But this is exactly why President Obama, who comes out of the Black church tradition of Trinity United Church of Christ in Chicago, should be applauded for his decision. He is standing on his convictions and principles and being  true to himself, his family and God. He explained, "I've been going through an evolution on this issue.  I've always been adamant that gay and lesbian Americans should be treated fairly and equally."

Years from now, history will reflect that President Obama did the right thing at the right time on this issue. Let's pray that more leaders will also find the courage to stand up for equal justice for all people and to oppose all other forms of discrimination. The time to stand up for what is right and just is now.

Benjamin F. Chavis Jr. is president of the Hip-Hop Summit Action Network and Education Online Services Corporation. He also serves as senior adviser to the Diamond Empowerment Fund and as National Director of Occupy the Dream. Chavis can be reached at [email protected]