Vote Our Choice for the Upcoming City Commissioner Race 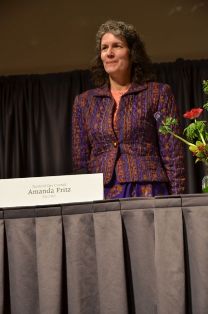 Who is the better choice for Portland City Commissioner: a seasoned politician with a decade of experience promoting progressive policy initiatives at the state level, or a scrappy community organizer who spent years getting into city office and who counts among her supporters a wide grassroots following?

One candidate appears to be so well-connected she has racked up an impressive war chest of large contributions, as well as a growing pile of endorsements from labor unions, PACs and large corporations.

The other candidate has a self-imposed contribution limit of $50 – and consequently far less cash in the bank – yet the years she has already spent attending community events side-by-side with regular people set her apart from the ranks of politics-as-usual career electeds.

You can't go wrong with either one, but The Skanner News is giving our edge to AMANDA FRITZ over Mary Nolan; like many others we've heard from, we think it's too bad these two women are running against each other because without question the city could benefit from having both on the council.

While we respect the professionalism and achievements of Nolan, we like Fritz precisely because she is so grassroots. She's not really a politician – she told us she does not aspire to higher office – but nevertheless her unrelenting dedication to the city is unmatched.

Nolan's unwavering support for education, women's health, gun control, veterans' rights and other progressive causes is important to note. Supporters say her political connections would make her a formidable force in getting things done in the city.

Yet even as a novice in political office, Fritz has shown her commitment to bread-and-butter issues such as improving operations at the 9-1-1 call center – which just got its first computer upgrade in more than 15 years and will now be better able to instruct and fully inform first responders in such a way that more police shootings may be avoided.

In our interview with the candidate she committed to streamlining the Bureau of Planning and Sustainability – where she served on a volunteer board for years before her election to office -- to make it friendlier to small businesses.

Fritz also spoke intelligently and in detail about the recent state arbitrator's decision to reinstate Portland Police Officer Ronald Frashour, who fatally shot Aaron Campbell after a 9-1-1 call gone wrong. For the record, both Nolan and Fritz said they would support eliminating the state arbitration rule when the Portland Police Union contract comes up for renewal in a few years.

Closer to home, Fritz has demonstrated her willingness to jump into the politics of immigrants and communities of color, championing the city's new Office of Equity and Human Rights despite a firestorm of criticism for it. In fact Fritz overcame the early reluctance of her co-commissioners to ultimately win a unanimous vote to create the office.

On that note we also commend candidate Teressa Raiford, who is on her first bid for public office. Raiford is smart, driven, and also spending her campaign hours working with community groups on civil rights issues; she missed her endorsement interview with The Skanner News because she was meeting at Ockley Green School with parents whose kindergarteners have been suspended and expelled. We respect that, and hope she runs again.

To see all The Skanner News Endorsements for the May 15 Primary Election, click here