Portlander in New York: A City Ruled by Rent 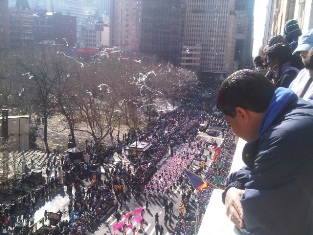 One of our neighbors recently told us that she hoped to get $10,000 in key money when she goes to Costa Rica for a year. What's key money, you might ask? Well, we live in rent controlled apartments (now called rent stabilized) that can rent for thousands of dollars per month less than the market rate. Key money is what someone wanting to sublet a rent stabilized apartment pays the actual tenant UNDER THE TABLE for the privilege of moving into a less-than-market-rate apartment. Key money is against the law, of course, but everyone takes part in the practice, apparently.

The guy we rent from organizes his life around his rent stabilized apartment. He pays $1,800 per month for an apartment that would rent for at least $3,000 on the open market. Since there's an income cap on qualifying for the reduced rent, he makes sure he doesn't earn a penny more than the legally allowable amount. In the meantime, he appears to have assets out the wazoo -- but those don't count. And, perhaps, most amazingly, he complains bitterly about how the landlord "nickels and dimes" him.

We've met many people who are locked into their current rent-stabilized apartments because they couldn't possibly afford to stay in Manhattan in similar circumstances if they moved. Pat has a friend who pays $1,400 per month for the six-room apartment where she raised her family. It's far more space than she needs now and could rent for $4,500 on the open market but she'll be there for the rest of her life. Turns out one has a hereditary right to a rent stabilized apartment as a direct descendent so sometimes the even life trajectory of a child can be controlled by cheap rent.

Apartment living has taken some adjusting. Because we live in an interior apartment, we have only one window that is exposed to the sky, aka the weather window.  Our next door neighbor has taken to singing scales (badly) while accompanying himself on the piano. And our upstairs neighbor stomps around her apartment as though she was auditioning for a part in "River Dance." In truth, we're really quite lucky, by New York standards, to have such a nice apartment but still … I miss my Mt. Hood view.

Living in a gigantic Petri dish, as one of our friends characterized New York City, has taken its toll. Pat and I are both recovering from a lingering flu that causes extended bouts with fatigue. Mine, which I think has finally released me from its grasp, lasted six weeks. I've never been one to worry about germs, but I find myself washing my hands and using hand sanitizers multiple times a day.

I'm sorry to report that work has become, well, work.  I know it's partly that I've been dragging myself through the motions for the past month (see flu above), but I'm just not feeling that excitement I experienced originally. There are lots of reasons -- some having to do with personalities and some having to do with the work itself -- and I don't for a minute regret my decision to come here, but it's just different.

Because of the sensitivity about issues regarding race/gender/ethnicity/religion that comes with working in the Mayor's office, I basically have to censor myself whenever I have to urge to say anything about any of those topics in the office. No joking. No kidding. No nothing.

Exploring NYC remains fun and exciting. Yesterday we went to the wilds of the northern end of Manhattan, by subway of course. We hiked up a steep incline at Inwood Hill Park anticipating an expansive northward view of the Hudson River on a fantastic blue sky day. We arrived at the ridge line at the top of a lovely trail, only to find ourselves directly overlooking the toll plaza of the Henry Hudson Bridge! While that was a bit of a downer, the rest of the hike to the far end of Ft. Tryon Park was great. We even walked through a lovely heather garden partially in bloom. (Winter has apparently bypassed NYC this year.)

Big deal of the month: I got to experience a ticker tape parade. My office is right on Broadway so the week after the New York Giants won the Super Bowl, we had front row seats for the parade. Turns out people throw more than ticker tape. You'll notice all the toilet paper hanging from the trees across the

street. I've decided my next job will be marketing myself to cities seeking a football world championship. The first year I was in Adelaide the Port Power Australian Rules football team won the "Grand Final" - the world championship of Australian Rules. And now, my first year in New York, the Giants win the Super Bowl. Coincidence? I don't think so.

Discovery of the month  is The Wafel and Dinges food cart in Central Park --http://www.yelp.com.au/biz/wafels-and-dinges-new-york. Between the pretentious name and the line we almost passed it up, but, oh my, we are glad we didn't. Turns out dinges are wonderful thingees that go on these fantastic Belgian waffles, made to order. In a city packed with treats, I would rate this as one of the best, so far.