A. Bruce Crawley, Special to the NNPA from the Philadelphia Tribune
Published: 25 January 2012 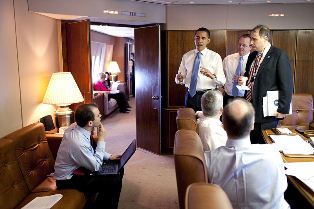 If you're Black and you've been feeling marginalized, disrespected and overlooked by all that's been going on in the Republican primary campaign, trust me, "you ain't seen nothing yet." Wait until you see what the 2012 Obama campaign has in store for Black folks.

Here's a helpful tip: Be sure to carry a mirror around with you between now and November, and glance into it from time to time to remind yourself that you actually still do exist as a Black voter.

As you do that, also try to periodically remind yourself that you and 15.9 million other Black voters in the 2008 election, which Obama won by 6 percentage points, accounted for 13 percent of every vote cast, and that you gave the "first Black president" 96 percent of your vote to sweep him into office.

But hey, this is 2012, and none of that, it seems, has been factored into the "first Black president's" 2012 re-election strategy. In a recent Newsweek/Daily Beast article, "Yes We Can (Can't We?)," reporter Andrew Romano promised to give the inside scoop on "Team Obama" and the "Juggernaut Reelection Machine" it's building in Chicago.

Give it a read. My guess is that you'll feel highly informed, deeply disappointed, a little bit frightened and finally, outraged by the story.

Highly informed? That'll be the part where Romano points out that "With ten months to go before Election Day, the president's job-approval rating is loitering around 46 percent, which is a problem, because the incumbent party has lost the last five times its president started Election Year below 49 percent. Likewise, no president since Franklin Roosevelt in 1936 has been reelected when the unemployment rate is as high, or higher, than it is now (8.6 percent)."

Despite a lackluster Republican primary field and deep campaign pockets, 2012 is not shaping up as a slam-dunk for the basketball-loving Democratic president.

Did I say "deep pockets?" Take this from the Newsweek/Daily Beast feature: "Obama raised $15.6 million from financial-sector workers through September, more than the entire Republican field." Add to that the campaign's expectation that it will raise $1 billion by November, a new record for a presidential election.

A "little bit frightened?" According to Newsweek, Team Obama is currently "tinkering away" on a "micro-listening computer model" that will track every conversation that every single Obama volunteer has, every door they knock on, every action they take." They'll use it "to collect online and off-line behavior patterns on individual voters." I don't know about you, but this all seems a whole lot more "up close and personal" than I was looking for from a presidential election campaign.

Did I also mention "disappointed?" Go on YouTube and check out "Jim Messina: Paths to 270 Electoral Votes – Obama for America." As Messina explains it, the "Five Paths" include the West, Florida, the South, the Midwest and the "Expansion." Sounds reasonable, analytical and geographic on YouTube. Then you read the Newsweek article closely and you see where Messina explains that several of the paths "hinge on the president increasing his margins among Latinos, the fastest growing subset of the electorate." In fact, Messina went on to say specifically, "The Latino vote will be absolutely crucial in this election." 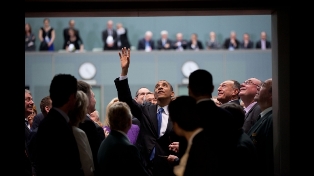 Break out that mirror, Black folks. If the Hispanic community that sent 9.7 million people to the polls in 2008, and gave Obama 66 percent of that vote, is "crucial," shouldn't Black people, who represented 15.9 million voters, in November 2008, and who gave Obama 96 percent of that total, also be "crucial enough" to mention in Newsweek?

All of this leads to why I also said that I was "outraged" by how Team Obama presented itself in the Newsweek story. On page 43 of the magazine was a full-page "Team Obama" organization chart. There was "the first Black president" himself, positioned at the very top, as he should have been, I imagine. But then there were nine other people — six men and three women. Included were, of course, Messina, and the all-powerful David Axelrod, who's described as "Obama's long-time message guru."

Despite the country being comprised about 33 percent by Blacks, Hispanics and Asians, and despite Black voters having consistently been the single most loyal portion of the president's base, there wasn't a single Black or African-American face anywhere on the entire page.

Make no mistake, our national elections have evolved to become nothing more than massive brand marketing campaigns. Obama's the brand; you're the consumer. Get over it! In that regard, however, would McDonald's, General Motors or Nike be so naïve as to sit back and assume that Black consumers would continue to buy their products without satisfactory results, and without the input of senior-level, African-American marketing strategists? The answer to that is "No!"

Or is it that Axelrod and his decidedly non-diverse minions simply believe that they "understand Black voters" sufficiently that they don't even need senior-level Black input to develop their outreach strategies?

Having worked with David Axelrod fairly closely during both of John Street 's mayoral campaigns in Philadelphia in 1999 and 2003, I absolutely believe the Obama campaign now feels, as Axelrod believed then, that there is absolutely no reason to spend reasonably significant amounts of time or money reaching out to Black voters. His assumption then, as it probably is now, was that the African-American electorate in the 2012 election simply has nowhere else to go.

In Philadelphia during both elections, Axelrod spent virtually every one of his very-well-compensated "campaign hours" focused on attracting the "white swing voter." Today, very similarly, he's focused on the so-called "Independents." In the Street campaign, he left the cultivation of, and outreach to, the Black vote, to African-American campaign consultants — including D.C.-based pollster Ron Lester, campaign manager Lana Felton Ghee and me, on the advertising and public relations side. Despite attracting less than 20 percent of the overall white vote in both elections — well below the percentage of the city's white registered voters — Street won in '99 and '03 because Black turnout broke records across the city, and because he successfully attracted 96 percent and 98 percent, respectively, of that vote. In fact, if Street's outcomes had been solely dependent on the Axelrod strategy of attracting "white swing voters," he would have lost badly both times.

The problem in 2012 is that Axelrod and "Team Obama" seem intent on delivering the same basic approach they used in 2008, wrapped in high-tech gadgetry and bolstered by more money than has ever been spent in a presidential campaign.

At its core, however, the outreach strategy, is flawed, and unless the campaign takes steps very soon to ensure African-American senior-level strategic input, and an effort that reflects a healthy respect for Black voters, the "First Black president" will only get to serve one term in office.