Charles D. Ellison Special to the NNPA from the Philadelphia Tribune
Published: 09 January 2012 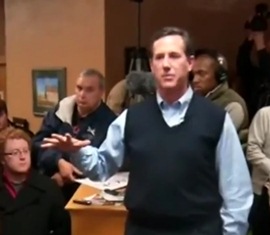 It's a pickle the former underperforming Pennsylvania Senator has been in before. Perhaps afraid of repeating past electoral mistakes (flashbacking in cold sweats to his 18 point loss in 2006 to current Sen. Bob Casey), Rick Santorum appears to fall back on race as a way to gain tactical advantage in the Republican presidential primaries.

But some are calling it a cheap attempt at racial coding that worked. In a place where only 2 percent of the population is African American, and the majority of caucus goers are rural white seniors, aged 50 and up, Black people become an easy target.

Santorum hasn't been able to shake that perception since right before the caucus. "I don't want to make Black people's lives better by giving them somebody else's money. I want to give them the opportunity to go out and earn the money," was Santorum in the flesh, free-styling about Medicaid and other social entitlements before a small sea of white faces.

To Santorum supporters, and rank and file Republicans, it's as if he didn't use the word "Black." Passionate debates flared up throughout Facebook and the Twitterverse, with loyal conservatives (both Black and white) swearing the senator didn't say it. Others blamed it on an invisible reporter asking the question. Still, when watching the CBS video that went viral across the Web, it's clear as Hawkeye State snow on a bitterly cold day what Santorum said:

It was an awkward moment. Even the senator admitted as much in a follow-up interview on CBS News in which the host dogged him with questions on what he meant. Santorum reached for the mental lapse defense, swatting at his own comment as if a mosquito were buzzing in his ear. He claims he didn't know the context — while not denying he said it.

"If you look at what I've been saying, I've been pretty clear about my concern for dependency in this country and concern for people not being more dependent on our government, whatever their race or ethnicity is," Santorum said in the interview.

But, that's a big part of the problem, argues Urban League President Marc Morial, who blasts Santorum for picking on people of color when nearly 85 percent of food stamp recipients are white. "By falsely suggesting that people of color are a disproportionate drain on resources provided mainly by whites, Santorum deliberately fans the flames of racial divisiveness," says Morial.

Santorum's been here before. Back in July of 2011 when he announced his run for the Presidency under a hot Somerset County sun, he was digging back into old racial coding crates, lamenting to cheers and applause from an ocean of white Pennsylvanians how " … America was a great country before 1965."

It was the same question back then as it was this week: Why pick 1965? Was the wine good that year? Some observers, particularly many civil rights historians and activists, chomped on the senator's bit about that, accusing him of racial pandering to an anti-Black conservative electorate seething with resentment at any sign of Black progress. It just so happened 1965 was the year President Lyndon Johnson signed Executive Order 11246, otherwise known to most as "Affirmative Action."

Later on in that same speech, he rails on entitlements and clumsily inserts recent small talk with Juan Williams as validation. Williams is the Black journalist famously disgraced from National Public Radio, but now happily skipping about on FOX News as their most visible face of color.

"Juan Williams said to me about a week after President Obama decided to double down. I saw him in the green room. And I said why are you doing this? Here's what he said. He said, 'Let me tell you what President Obama's team is telling me.' He said, 'Americans love entitlements, and once we get them hooked, they will never let it go.'"

Some suggest that Santorum knows what he's doing, but observe that critics shouldn't be so fast to knock him as "racist." It's all politics, they say, and the senator is doing what it takes to win the primary.

"Look — Rick is from a state where the Black population surpasses the national one," says one source speaking anonymously on background. "He worked closely with Black clergy and community activists as a senator and found federal money for programs when they couldn't. You can't walk around Pennsylvania and not bump into a Black person."

"But," the source wryly adds, "Rick has this habit — just like most politicians — of sometimes tailoring his message for a particular kind of base. And he's always getting into trouble for it."

Long-time Washington observer and Politic365.com Congressional Correspondent Lauren Burke says Santorum's not the only repeat offender. That former Sen. Santorum brings up Blacks within the context of poverty is telling. Though 10 percent of whites in the U.S were in poverty in 2010, you'd never know it listening to Republicans running for president," argues Burke. "There are 223,553,265 non-Hispanic whites in the U.S., 10 percent of whom live in poverty. That's 22,355,326 people. Yet when poverty comes up in GOP political discussion it's in the context of Blacks and Blacks only. Blacks are the racial punchline in the GOP joke of poverty."

Few prominent Black Republicans or party operatives are willing to publicly defend Santorum; most have gone silent and prefer speaking off record. Others are tied up in the ensuing consulting race over who will do Black outreach for the Republican nominee in 2012. But, widely read Black conservative columnist Gregory Kane pulled no punches in describing Santorum's gaffe. "Just when I thought it was safe to watch the news again, just when I thought that the Republicans couldn't possibly trot out yet another moron who wants to be president, along comes Santorum," wrote Kane in the Baltimore Sun.

In the end, however, Santorum probably just can't help himself. Hiram College political scientist Jason Johnson, author of "Political Consultants and Campaigns: One Day to Sell," argues that Santorum suffers from an epidemic trend plaguing most white politicians who run against minority candidates. "There have been studies on this. White candidates can't seem to stay on message when running against minorities. That's what probably happened to Rick Santorum. He's going to do it again."