With Cain Out, Turn the Glare on Gingrich's Racial Skeletons

By The Skanner News
Published: 06 December 2011 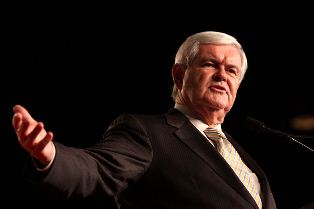 His closet is rattling with them. The first reminder of that was his off the cuff crack a during Harvard appearance that ghetto children are lazy and chronic thieves, who should be dumped into menial jobs early on to break their alleged slothful ghetto habits.

This racially loaded slur was vintage Gingrich. More than any other major party office contender he has never shied away from spewing some of the most bigoted, racially charged, digs on and off the campaign trail. The crack about ghetto kids having "no habits of working" was a near verbatim repeat of Gingrich's jab at poor blacks nearly two decades ago.

Too Religious and Lawsuit Happy

Back in the 1990s, the Georgia Republican chided a group of black journalists by saying blacks were poor because of their "habits." He didn't stop there. The habits he cited as impeding blacks' progress were that they were too religious--and too lawsuit happy, that is, too quick to mount legal challenges to discrimination. Instead, he told the reporters, African Americans should acquire good old business and professional skills to lift them out of poverty.

In his ill-famed "Contract with America," the document that helped the GOP win back control of the House of Representatives in 1994 – and made him House Speaker from 1995-1999 -- Gingrich encoded his obsession with the presumed "habits" of social and personal dysfunction pervading black communities. He proposed lopping off all welfare benefits for poor teen mothers and using some of the money saved to dump their kids into orphanages.

Gingrich resigned from Congress in 1999, in the wake of a sex scandal and was mostly out of the headlines for a decade. But that didn't mean he had toned down, let alone altered his thinking about minorities and how society should deal with them.

With the 2008 presidential election close at hand a politically reenergized Gingrich was back on the media's radar screen, and he didn't miss a beat. He trotted out his obsession with alleged ghetto pathology and lambasted bilingual education as "the language of living in the ghetto."

Gingrich claimed this posed a grave danger to the nation and would undermine the American way of life. That claim didn't get much attention in the wake of the presidential duel between Obama and GOP nominee John McCain. But Gingrich didn't go away and neither did his compulsion to ram race into any public issue he could.

In 2009, his race-baiting targeted then Supreme Court nominee Sonia Sotomayor. Gingrich derided her comment about being a "wise Latina" and said that if a white man had made a similar remark he'd be summarily drummed out of the nomination. Gingrich branded her a Latina racist and called for her to be dumped.

But Gingrich, at that point, was still a bad joke in most political circles. Whatever he had to say could be easily shrugged off or laughed off as irrelevant. Things changed, however, in 2010.

Last year Gingrich announced he was tossing his hat back into the presidential ring. Although he was still stuck at the tail end of the pack of GOP hopefuls, he had a national platform. And he wasted little time in putting his race-baiting act back on full display.

Gingrich dredged up the old slur of President Obama as an illegal alien in the White House with the odd-ball charge that he engaged in Kenyan anti-colonial behavior. This drew howls of protest that Gingrich was pandering to the bizarre birther allegations. But Gingrich, in reality, was just being Gingrich. As in the past, he simply took another opening to race-bait in the public arena.

In a Meet the Press interview last May, he did double duty on racial bigotry. He slammed Obama with a racist code-name calling, branding him the "food-stamp president." He double downed on racist coding by huffing that Obama's policies would turn the country into Detroit.

Gingrich may have preferred to lambaste blacks again for the alleged "bad habits" of the ghetto—sloth, poverty and dependence on government handouts—but Detroit is universally recognized as the poster city for urban decay. The mere mention of the city was enough to make the point about alleged black dysfunctionality.

Although blacks are a favorite target of his, Gingrich has spread his bigotry around. He's gone after Muslims, railing at the notion of putting a mosque near Ground Zero in New York, and he endorsed racially profiling them under the guise of fighting terrorism. He also likened gay activists to fascists.

Gingrich gets an occasional mild rebuke in the press, and quiet cheers from his supporters, whose numbers have climbed with the crash and burn of Michelle Bachmann, Rick Perry and Cain, along with the GOP's fear and loathing of Mitt Romney by ultra conservatives. This insures that Gingrich's blatant bigotry will continue to get headline coverage.

If Gingrich, God forbid, should make it to or near the White House, race-baiting would be back on the nation's table. Before that happens, turn the glare on Gingrich's bigotry.

Earl Ofari Hutchinson, an associate editor of New America Media, is a weekly co-host of the Al Sharpton Show on American Urban Radio Network and the author of How Obama Governed: The Year of Crisis and Challenge. He is also host of the weekly Hutchinson Report Newsmaker Hour on KTYM Radio Los Angeles, streamed on ktym.com, as well as podcast on blogtalkradio.com and thehutchinsonreportnews.com Follow him on Twitter: http://twitter.com/earlhutchinson.