While NBA Heads to Court, We Get on with Our Lives 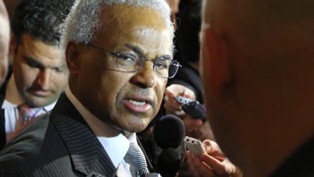 Well, that about does it.

The NBA owners say they've made their best offer. The players responded Monday by vowing to file an antitrust lawsuit. The owners are continuing legal action of their own. So, after months of hard feelings, contentious negotiations and downright ridiculous claims (did a union attorney really say owners were treating players like plantation workers?), it's time for the rest of us to move on.

Trust me, we'll all be just fine.

The next time you hear someone talk about revenue splits or hard salary caps, put your hands over your ears and shout, "La! La! La! La! La!" Sure, it's a bit childish, but no more so than billionaire owners bickering with millionaire players after one of the most successful seasons in NBA history.

Clearly, none of those guys give a flip about the fans, the low-paid arena workers in desperate need of a paycheck, or the nondescript team employees who might soon be out of work as well.

While this is probably what the owners had in mind all along - a major rollback they knew the union wouldn't accept - and the players blundered by choosing court over a proposed settlement that was probably about as good as they're going to get, let's not digress.

It's impossible to pick sides in this fight. That would be like saying, "Hey, would you rather spend the day with an IRS auditor going over your tax return or at the dentist getting a root canal?" They're both repulsive options. Same with the NBA lockout, which features rich guys determined to get even richer vs. not-quite-as-rich guys who don't want to give up their other, other Benzes.

Instead of games, all we're getting is mind-numbing rhetoric. If you think LeBron James' hour-long "Decision" was tough to stomach, you might get ill counting the times Commissioner David Stern rambles on about "negotiating in good faith" or players union chief Billy Hunter refers to the owners' proposal as "extremely unfair" - which they both did again Monday.

The fans, meanwhile, are left at the curb, supposed partners who get absolutely no say in the matter. It's time to start thinking about them.

Without further ado, here's some tips for all those NBA diehards fretting over the idea of going through a long, cold winter without Dirk or Kobe to keep them company. Follow these few easy steps, and you should have no problem dealing with your hoops withdrawal:

- Introduce yourself to those folks who live under the same roof. Officially, they're known as your spouse and kids. You'd be amazed at how much you have in common. While going out for a romantic dinner with your betrothed or helping the kids with their math homework may seem a bit passe compared to Blake Griffin dunking over a car, in time you'll come to appreciate these little things they call "real life." Maybe you'll even stop screaming "Yes!!!!!" - Marv Albert-style - when asked if you'd like more dessert.

- Work on your jumper. All you need is a ball and goal, and it's actually quite fun. Most gyms come equipped with a regulation court. So does your neighborhood park. Heck, I went online and quickly found a rim and net that attaches to the side of your house for less than 50 bucks so you don't have to go anywhere. Or maybe you should go somewhere. Take a walk. Or a jog. Or a bike ride. These next few NBA-free months would be a good time to knock off a few pounds.

- Improve your bottom line. Forget a 51-49 split. How does a 100-0 split sound? With no need to buy overpriced tickets or NBA's League Pass so you can watch 14 games a night from the couch, you'll automatically be putting hundreds, if not thousands of dollars back in your own pocket - with nary a greedy owner or player trying to get his share. And in case you didn't notice, they don't have these sort of issues in the college game, where it's understood that everyone works for free. There's not exactly a shortage of THOSE games to watch on any given night, being played by guys who will very shortly realize they should be demanding a piece of the pie.

- Put the money you're saving toward a European vacation. NBA stars shouldn't be the only ones going overseas during the lockout. Granted, you'll have to pay handsomely for the privilege, while they're being compensated in the millions for renting out their skills in countries like Italy, Russia and Turkey. Then again, you'll be able to spend your days in the leisurely pursuit of wine and cheese, while they'll have to keep themselves in some semblance of playing shape. As an added bonus, you might be able to catch one of your favorite players on the TV in your hotel room, even if you have no idea what the commentators are saying. That sure beats watching a replay of the 1970 game between the Phoenix Suns and Atlanta Hawks on NBA TV.

Still not persuaded you can do without the NBA?

Well, let's not forget that with the NFL settling its labor dispute, we've still got seven more weeks to go in the regular season, followed by the playoffs, then the Super Bowl. Once we're done with that glorious American holiday, it's only another week or two until pitchers and catchers are reporting for spring training.

Before you know it, we're getting ready for opening day.

See, we'll all be just fine.

Paul Newberry is a national sports writer for The Associated Press. Write to him at pnewberry(at)ap.org or http://www.twitter.com/pnewberry1963