British Riots: London's Calling, But Are We Listening? 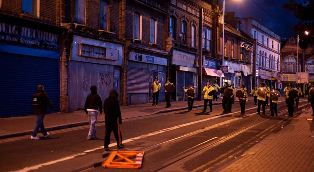 Last year, on my second day on the job as the new Senior Director of Economic Programs for the NAACP, I went to London with our President and CEO Benjamin Todd Jealous to attend a conference on Global Youth Employment.  Eight months later I, along with the rest of the world, am seeing images of economically disenfranchised youth throughout England rioting and rebelling.  The ignition for these rebellions appears to be the fatal shooting of Mark Duggan, a young Black man, by the police.

Youth rioting and rebelling in economically disenfranchised areas in relation to possible racial discrimination and police brutality is something with which most Americans are all too familiar. In a BBC video clip in which Darcus Howe, a Black English migrant, is interviewed about the riots, Mr. Howe states that what is happening throughout England is similar to insurrections throughout the Arab world, where youth have been a leading force in street protests demanding change from their government.  Where I agree with Mr. Howe is that these incidents of riots and rebellions from economically disappointed and disenfranchised youth are not limited to the context of London, or even England.

During the 2010 Global Youth Employment Conference in London, sponsored by the NAACP, CNBC, The Blackstone Charitable Foundation, the International Youth Foundation and others, leading minds highlighted the crisis of global youth unemployment.  Between the years 2008 and 2009, global youth unemployment increased by almost seven million.  This is about 35 times the increase that occurred before the recent global recession.  As BusinessWeek wrote in its February 2011 article "The Youth Unemployment Bomb," "[A]n economy that can't generate enough jobs to absorb its young people has created a lost generation of the disaffected, unemployed, or underemployed -- including growing numbers of recent college graduates for whom the post-crash economy has little to offer."  This relationship between youth unemployment and long-term social and economic disenfranchisement, coupled with austerity budgeting, which threatens to lessen the opportunities and support provided to the youth of today, reminds me of the words of Dr. King: "The people will rise up and express their anger and frustration if you refuse to hear their cries.  A riot is the language of the unheard."

Laurie Penny, in her article "Panic on the Streets of London," writes:

The people running Britain had absolutely no clue how desperate things had become.  They thought that after thirty years of soaring inequality, in the middle of a recession, they could take away the last little things that gave people hope, the benefits, the jobs, the possibility of higher education, the support structures, and nothing would happen.  They were wrong.  And now my city is burning, and it will continue to burn until we stop the blanket condemnations and blind conjecture and try to understand just what has brought viral civil unrest to Britain.

There is a consensus as to how to address these types of challenges.  In a 2010 report on employment trends, the International Labor Organization notes that comprehensive training, as well as programs that include classroom and on-the-job training, technical and non-technical assistance, financial support for the employer and employee, and job placement services have all been shown to have the most success in advancing youth employment.  These types of programs require private- and public-sector partnerships in order to properly function.

Recently, such a program was announced in New York City. Mayor Bloomberg announced a $130-million project focused on Black and Latino men that will be funded by two private foundations and the New York City budget.  This program will invest in job training, educational classes, paid internships, and paid mentorship positions all aimed at young Black and Latino men.  This type of local initiative is important but must be replicated on the national level and throughout countries across the globe.  The global recession must be met by a global investment in our future, and this will mean targeting economically disenfranchised youth and, often, youth of color.  The NAACP and its new Economic Program department is dedicating itself to these type of initiatives, and in this globalized 21st century, we recognize that bridging racial and economic disparities is not a domestic challenge but an international one.