Portland's Juneteenth festival connects us to Americans across the country, as we all celebrate together the abolition of slavery. Scheduled this year for Saturday June 18, it commemorates the date of June 19, 1865, the day when African Americans enslaved in Texas, first learned that they were free. Of course, that was two and half years after Abraham Lincoln delivered the Emancipation Proclamation. Why? Because until emancipation was enforced by the U.S. military, Southern slaveholders refused to tear down that evil institution.
Many Blacks toiled without pay for unrepentant slave-owners during those years, which is all the more reason to celebrate our freedom now. This is an important and historic anniversary for all of us. 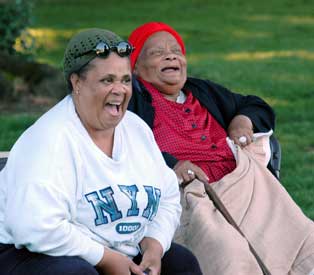 Clara Mae Peoples (at right in photo)  started Portland's Juneteenth celebration in 1945 with an announcement over the loudspeaker in the Kaiser shipyards.  A university graduate from Oklahoma, and a resident of Vanport, Peoples, now 84, drew praise May 30 at an event commemorating the Vanport Flood. Attendees said she took dozens of neighborhood children under her wing, feeding them when their parents were missing at the wheel.  In 1972, Peoples and teacher Ora Lee Green organized a Juneteenth celebration in Holladay Park that soon added a parade and later moved to Jefferson High School. This year the parade will start from Bethel AME Church on Northeast 8th Ave. and Jarrett St., at 11 am. The party will run from noon to 6 p.m. at Jefferson High School. Read Full Story: Start Your Summer with a Celebration of Freedom: Juneteenth
In recent years the reputation of Portland's Juneteenth celebration took a blow for its association with James 'Lonnie' Yoakum, and Yam Yams Southern Cooking and Barbecue restaurant. Later he was arrested for large-scale distribution of cocaine in 2009.
Since then new faces and new energy have infused a fresh sense of purpose and mission into the Juneteenth festival board. Juneteenth deserved this second chance and it deserves our support now.
To those who founded Portland's celebration we extend our deepest respect. To those who have worked to make it a success over the years we offer our gratitude.
What we do not accept is that any single individual can claim this historic day as their personal identity. Woody Broadnax, Sir, we thank you for your service; now yield the floor. This festival is now under new management, with new leaders and fresh ideas. You are not Mr. Juneteenth.  I repeat. You are not Mr. Juneteenth.  If anybody has a right to claim Portland's Juneteenth it would be Ms. Clara Peoples. But Juneteenth is bigger than any one of us. Juneteenth belongs to all descendants of slaves in America.
So folks, please come out and enjoy this crucial day in our history, this day of joy and unity for all Americans. As this year's grand marshal, I am delighted to be part of the 2011 celebration. We're going to have a wonderful time with our parade and at Jefferson High School. So come on over and make Juneteenth a great American holiday, as it was designed to be.  Does Juneteenth belong to any one person, yes or no?