Solving Hunger by Eating (The Right Amount Of) Meat 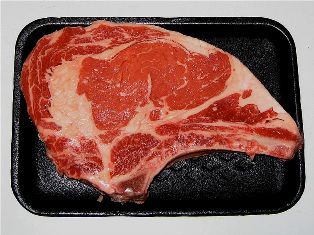 So far, agriculture has kept up with population -- there's enough food in the world to feed everyone. But not everyone's getting fed -- at least a billion people live with hunger, according to the U.N. World Food Program. And the world is in the midst of yet another spike in food prices. As long as we keep diverting grain from human mouths to animal ones, people will go hungry. It's simple market economics: It's more profitable to produce meat -- even though the meat that results from feeding grain to animals has less food value than the grain itself.

Which is why there's hunger even when there are no grain shortages: The wealthy of the world are willing to pay more to feed animals than poor people can pay to feed themselves.

So must we all become vegetarians in order to avert world hunger? Not necessarily. The spring issue of YES! Magazine suggests another route to food sufficiency.

Recent food price spikes mean those on the margins are more likely to go hungry, and political instability is among the outcomes. In February, the World Bank reported price levels only 3 percent below the 2008 peak that produced widespread food riots. At the beginning of March, The U.N. Food and Agriculture Organization (FAO) reported a 70 percent increase in export grain prices during the last year. The FAO Food Price Index was at its highest level since the FAO began monitoring prices in 1990.

The World Bank discusses two factors driving up food prices: weather and ethanol, and quotes a USDA estimate that 40 percent of the U.S. corn output will go to making ethanol this year.

But in the United States in 2009, the last full year for which numbers are available, 137 million metric tons of corn, sorghum, barley, and oats became animal feed. That's 46 percent of total U.S. consumption of those grains. It's also two and a half times the amount of grain the United States exported in that year.

The solution to world hunger, then, is simple: Stop eating meat.

No realistic person expects that, or anything close to it, to happen. There is a slew of valid reasons for being vegetarian: raising meat produces greenhouse gases, degrades water ways, and displaces forests and wild habitats, and many people feel that the way animals are raised and slaughtered is immoral. Nonetheless, it seems that meat eating will be with us always.

It turns out, though, that eating meat doesn't have to take food away from hungry people, and it doesn't have to involve a lifetime in a cage. As Joel Salatin says, in a YES! Magazine interview, "Don't blame the cow for the negatives of the industrial food system."

At Salatin's Polyface Farms, the pastures are five times as productive as the local average, and, he says, "We've never bought a bag of chemical fertilizer and we've never planted a seed." Salatin raises cattle, pigs, and chickens, and does it all without using anything that could become human food. He says his farmland has gotten richer and more fertile as a result of decades of grazing.

This is the model that most humans followed for most of history: Animals ate what humans couldn't, and turned that into meat that humans could eat. Ron Fairlie, in his new book, "Meat: A Benign Extravagance," calls this "default livestock." He calculates that a universal return to that model would return food grains to human mouths, and still produce enough meat for everyone to have some.

Not a great deal, mind you -- about three quarters of a pound of meat and 1.33 pints of milk per week. But the roughly 1.5 billion people in India, Pakistan, and Bangladesh eat less than that already.

For the sacrifice of cutting our meat consumption, we'd eliminate the cruelty of confinement animal-feeding operations. We'd do away with the bulk of the greenhouse gases associated with industrial livestock -- Salatin says his operation actually sequesters carbon. Best of all, we'd know that no one in the world had to go to bed hungry.