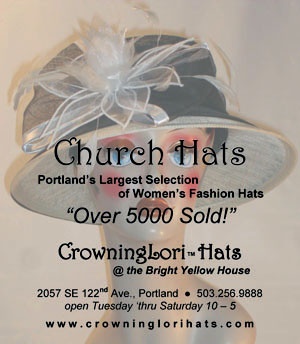 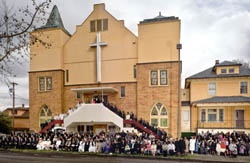 A gala reception celebrating the new Oregon Historical Society's exhibit celebrating the Vancouver Avenue First Baptist Church will be held on, Thursday, Aug. 13, from 6 to 8 p.m. at the society's museum, 1200 SW Park Ave.
The showing, called "A Heartfelt Welcome: The Vancouver Avenue First Baptist Church Collection," includes only a small portion of the vast new archives of the church's artifacts that the historical society has collected and organized since its donation late last year.
The archives, which now constitute the historical society's largest single permanent collection, will now officially be made available to researchers of Oregon culture and history.
"Number one I'm excited about the Oregon Historical Society even considering doing a project like this," said Rev. Matt Hennessee. "I think the fact that they are looking at the community and asking, how can we be more contemporary? I think is great."
The archive came about as a direct result of congregation member Raymond Burrell III's research on a coffee table book of photographs and stories commemorating the church's 65th anniversary. Much of the material was originally unearthed by Burrell, who approached the historical society with the idea of a permanent collection.
See our video of Raymond here.

"One of the things that I've imagined happening when people come to the exhibit is people looking at photographs and saying, 'I know that person,' or 'that's my grandmother,'" says Eliza Canty-Jones, who worked with Burrell to curate the collection. "So I've imagined small kids and older people and the prompting of those stories happening."
The exhibit includes many photographs and manuscripts, but also artifacts such as the church's original apple-crate pulpit and a massive stained-glass window.
"I think one of the really exciting pieces that's alone is a suitcase that a woman grabbed as Vanport was flooding, and she grabbed this small suitcase that held all of her gospel music in it, and she grabbed that and her six kids and raced away from the floods," Canty-Jones says.
"And the next Sunday she came to Vancouver Avenue and she's been there ever since."
Vancouver Avenue is not the biggest congregation, nor is it the oldest in Portland. But historians – and friends of the church – say it has played a key role in Portland's development.
Born in the aftermath of the Vanport flood, Vancouver Avenue's founder and longtime leader, Rev. Dr. O.B. Williams, was a nationally-recognized civil rights leader who once personally welcomed Martin Luther King Jr. to the church.
In fact a photograph of Rev. King with Rev. Williams commemorating the visit is part of the historical society's display.
Hennessee says taken as a collection, the church's artifacts stand as a lens to view the history of Portland from the 1940s to the present day.
"As I look at this I think it's a real exciting time to say -- let's honor the past," Hennessee said. "It's not so far back and so ancient that it looks like storybook, but it's contemporary enough that we can put our arms around it and we can be energized and inspired by the fact that we too can create history now that people 20 and 30 years from now will be looking at us and saying, what great work they did."
For more information go to www.ohs.org.

About 1,000 are expected to pack the venerated halls of the Vancouver Avenue First Baptist Church on Sunday, Sept. 20 for the 100th anniversary of the building's consecration as a house of worship.
Everyone who has ever had any connection to the church is welcome to attend. A gala service is scheduled that day, followed by a commemoration banquet.
"We have put together an amazing gospel choir of over 100 people who are going to join in unison and in song for that service," says organizer Raymond Burrell III. "So it's going to be an amazing, amazing service that day.
"In a sense it's a reunion, where we're just going to reunite with a lot of people who have been a part of this church, because in a sense we are one big family."