New federal Medicaid requirements will require 450,000 Medicaid recipients in Oregon to show proof of citizenship when they enroll in the Oregon Health Plan. 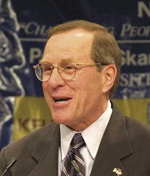 But Gov. Ted Kulongoski said the state will make certain that no one who is eligible for Medicaid in Oregon will suffer harm.
"Despite the fact that these new rules will impose a significant burden on the state, we will make certain that the health, safety and well-being of our neediest citizens will not be jeopardized," Kulongoski said.
The new federal regulations, which Oregon and other states received this month, will require about Medicaid recipients in Oregon to show proof of citizenship when they enroll or re-enroll in Medicaid-funded programs, such as the Oregon Health Plan and long-term care. Oregon Department of Human Services officials estimate as many as 70,000 Oregonians may be unable to immediately and readily provide proof of citizenship.
"Unfortunately this is yet another financial and workload burden the federal government has imposed on states with short notice and little thought of the impact on citizens," Kulongoski said.
"Access to health care is important to everyone," said Bruce Goldberg, M.D., Oregon Department of Human Services director. "Our intent is to implement this new federal requirement ... while continuing to help some of the state's most vulnerable families and children."
There are concerns that the proof of citizenship will be difficult for people who are homeless, mentally ill or have developmental disabilities.
"The new regulations provide a range of ways to establish citizenship, and Department of Human Services workers will be assisting Oregonians to identify and locate documentation," Goldberg said. "No one who otherwise meets eligibility requirements for Medicaid programs will be removed from the programs or denied assistance."
As with other Medicaid program requirements, states develop a process that documents citizenship; Oregon's policy under existing federal law has been to accept a client's declared statement of citizenship. The new law expands this requirement to require physical proof of citizenship to be provided when someone applies for Medicaid.
For more information about the new rules, visit www.cms. hhs.gov/MedicaidEligibility/05_ProofofCitizenship.asp.