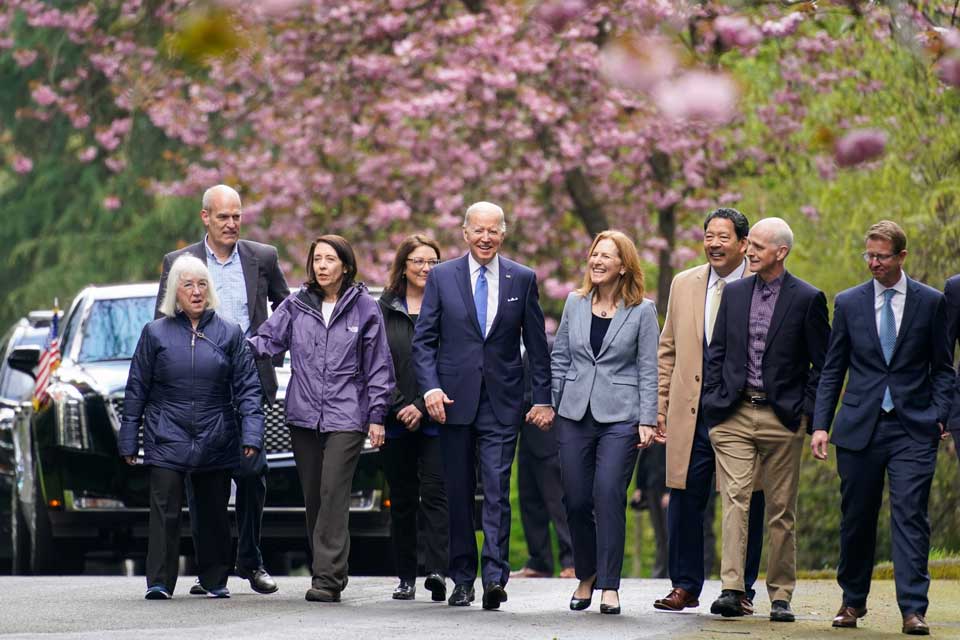 SEATTLE (AP) — With a backdrop of flowering trees, it was a setting fit for the signing of major environmental legislation. Even Seattle’s notorious clouds parted as President Joe Biden stepped up to speak Friday.

But when he sat down at a small desk with the presidential seal that had been set up for the occasion, there was no new law to sign, just an executive order directing federal officials to keep better track of trees in national forests.

The gap between the scale of the global warming crisis and the president’s initiatives seemed wider than ever on Earth Day. Although last year’s infrastructure legislation had some climate policies, such as building more charging stations for electric cars, many of Biden’s most ambitious proposals remain stalled in Congress.

Battling for the environment

Biden seemed eager to be signing something other than his executive order.

“My pen is ready,” Biden said in Seattle’s Seward Park. “Get some of these bills to my desk.”

He criticized Republicans for opposing climate action and hinted at his frustration with Sens. Joe Manchin of West Virginia and Kyrsten Sinema of Arizona, although he didn’t mention them by name.

Within the Democratic caucus, he said, “there’s only two senators who occasionally don’t vote with me.”

The lack of unanimity among Democrats and the steadfast resistance from Republicans in the evenly divided Senate has blocked hundreds of billions of dollars in tax credits for clean energy. Environmental advocates question whether the country can hit Biden's ambitious goals for reducing greenhouse gas emissions without such policies, and scientists warn that the world faces extreme heat, drought and weather unless fossil fuels are phased out swiftly. 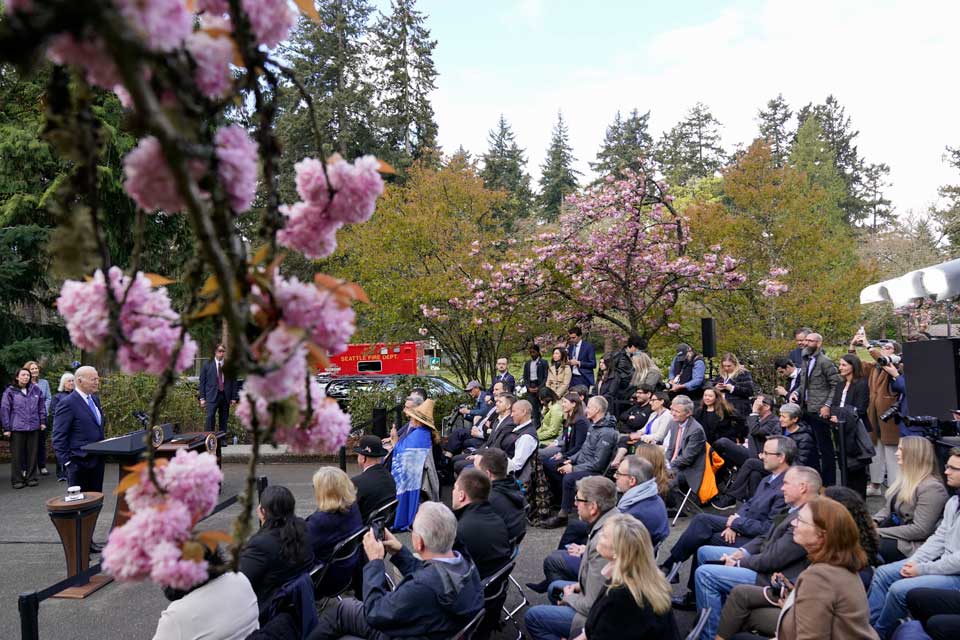 President Joe Biden speaks at Seward Park on Earth Day, Friday, April 22, 2022, in Seattle. (AP Photo/Andrew Harnik)With so much of his agenda in doubt, Biden instead drew a sharp contrast with his predecessor, former President Donald Trump, who often mocked climate change as he unraveled the country’s fight against global warming during his time in office.

“We’ve reached the point where the crisis on the environment has become so obvious, with the notable exception of the former president, that we really have an opportunity to do things we couldn’t have done two, five, 10 years ago,” Biden said.

Biden said he was staking his hopes on an up-and-coming generation.

“Every time I get a little down ... I just turn on the television or take a look at all the young people,” he said.

“This younger generation is not going to put up with all this stuff. No, they’re not.”

Biden spoke to some of that generation at his second stop of the day, Green River College, just south of Seattle. The auditorium included scores of students, plus faculty and local elected officials, and Biden used the moment to promote an agenda that goes far beyond the environment.

Fighting the high cost of healthcare

The speech was a collage of laws he’s passed and what he still needs congressional support to achieve. He discussed college funding, health care prices, child care expenses, corporate taxes, high speed internet and the importance of nursing.

Biden also warned that Republicans remain determined to repeal the Affordable Care Act more than a decade after it was signed into law by President Barack Obama.

“We need to keep this fight up,” he said.

Biden singled out the high cost of insulin for treating diabetes, which he wants to limit through new legislation.

“We’re not asking drug companies to do anything they can’t afford.”

The executive order signed by Biden on Friday directs federal land managers to define and inventory mature and old-growth forests nationwide within a year. The order requires the Forest Service and the Bureau of Land Management to identify threats to older trees, such as wildfire and climate change, and develop policies to safeguard them.

Old-growth trees are key buffers against climate change and provide crucial carbon sinks that absorb significant amounts of carbon dioxide and other greenhouse gases that contribute to global warming.

The order does not ban logging of mature or old-growth trees, the White House said.

Biden used his Earth Day events to reassert his environmentalist credentials when his administration has been preoccupied by high oil and gasoline prices following Russia's invasion of Ukraine. Gas costs have been a drag on Biden's popularity and created short-term political pressures going into this year's midterm elections.

He’s even encouraged more domestic oil drilling, angering some environmental activists, to compensate for the problem.

At the same time, Biden has focused on wildfires that are intensifying because of climate change. Blazes that are intense enough to kill trees once considered virtually fire-proof have alarmed land managers, environmentalists and tree lovers the world over. A warming planet that has created longer and hotter droughts, combined with a century of fire suppression that choked forests with thick undergrowth, has fueled flames that extinguished trees dating to ancient civilizations.

Timber industry representative Nick Smith said before the order was made public that loggers are worried it will add more bureaucracy, undercutting the Biden administration’s goal of doubling the amount of logging and controlled burns over the next decade to thin forests in the tinder-dry West.

“The federal government has an urgent need to reduce massive greenhouse gas emissions from severe wildfires, which can only be accomplished by actively managing our unhealthy and overstocked federal forests,” he said.

For many years the Forest Service allowed older trees that are worth more to be logged, to bring in money for removal of smaller trees, Furnish said. But that’s no longer necessary after Congress approved more than $5 billion to reduce wildfire risks in last year’s infrastructure bill, he said. The law includes money to hire 1,500 firefighters and ensure they earn at least $15 an hour.

Timber sales from federal forests nationwide more than doubled over the past 20 years, as Republicans and Democrats have pushed more aggressive thinning of stands to reduce small trees and vegetation that fuel wildfires.

Critics, including many forest scientists, say officials are allowing removal of too many older trees that can withstand fire.

A letter signed by 135 scientists called on Biden to protect mature and old-growth forests as a critical climate solution.

"Left vulnerable to logging, though, they cannot fulfill these vital functions,'' the scientists wrote Thursday.

Former Forest Service Chief Mike Dombeck and Norman Christensen, founding dean and professor emeritus at Duke University’s Nicholas School of the Environment, were among those signing the letter.