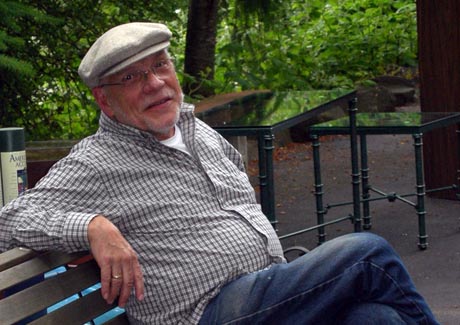 Paul Joseph Anctil died peacefully at home in Portland on March 23, 2011 after a final bout with cancer. He was 75.

Anctil was the founder of Anctil Heating and Cooling, located in Northeast Portland on North Williams Avenue.

A funeral service will be held at 11 a.m. on Tuesday, March 29 at St. Pius X, 1280 Northwest Saltzman Road. A reception will be held immediately following the funeral at the St. Pius X Community Center.

Paul was born on July 9, 1935 in Lynnwood, California to Homer and Rosella Anctil. He was the fifth child of eight in a Roman Catholic family that was a part of the St. Columbkille Church and School in Los Angeles, Calif.

"At age 20, I married my 18-year-old sweetheart, Mary Catherine Brett. That was Jan. 7, 1956," Paul wrote just before his death. Mary had been his neighbor, and his best friend's sister. Paul gave Mary an engagement ring as a high school graduation present.

"What I remember most about that time was a lot of people telling me that it wouldn't work because we were too young to get married. Together we had eight children: Michael, Victoria, Thomas, David, Catherine, Valerie, Donald, and Loretta, and spent forty-three wonderful years together," he punctuated in his writings.

After long discussions among the Anctil brothers about escaping the smog, traffic, unions and school system of L.A., younger brother Bill moved his family to Portland in August of 1966. Bill had set a fire. Paul and Mary moved to Oregon in June 1967 with six children of their eventual eight children. His brothers Rich and Ed followed with their families in 1970.

A skilled metal worker taught by his father, Paul established a career in sign making and worked for Columbia Neon designing and building some of Portland's most recognizable neon signs. This was followed by time working with Ted Nelson Co. (now Helzer Steel).

On October 1, 1976, Paul established Anctil Sheet Metal with the acquisition of a 56 year-old family business, Lahodny Sheet Metal. The company operates today on North Williams Avenue as Anctil Heating and Cooling. In its 35th year, the Company is led by his son, Tom, and specializes in high-end customized residential and commercial HVAC systems. Paul retired in 1993.

Paul and Mary were very active in both professional and civic affairs. Paul was a charter member of the Albina Rotary in 1979, which sought to affect a lasting impact on the business community and personal lives of the area bounded by Mississippi Avenue, NE Fremont Street, and NE Alberta Street. He served as president, and one of his most proud achievements was helping to establish, fund and build the St. Andrew Legal Clinic (SALC) in 1979, providing free legal services to those in need. He also led the original initiative for what is now ORACCA (Oregon Air Conditioning Contractors of America) in a partnership with Northwest Natural Gas; was an active member of the Knights of Columbus; was past Commodore of the Hayden Island Yacht Club; volunteered and helped fund-raise for Birth Right (now Mother & Child Education Center); was very active in Catholic education at St. Anthony, St. Cecilia, St. Mary of the Valley, Holy Trinity, Jesuit High School, Central Catholic High School, and St. Pius X; and was long- and deeply-committed to the mission of the St. Vincent de Paul Society.

Following Mary's death from a rare disease in 1999, Paul threw himself even further into volunteerism. Paul wrote, "I began working very closely with [St. Pius X] under the direction of my good friend, Fr. Ron Millican. That's where I met and fell in love with my present wife, Barbara Ann Garrova. We got married on March 10, 2005. I was then the stepfather of Barbara's wonderful daughters, Megan Ropella and Katey Kane. We now have 28 grandchildren and they are Mariana, Shauna, Brian, Katie, Veronica, Brandon, Allan, Courtney, Paige, Jordan, Cassandra, Rachel, Jade, Gabriella, Mitchell, Zachary, Sydney, Cole, Carter, Travis, Samuel, Cavan, Britten, Caden, Andrea, Vivian, Theodore, and Phillipa. Two great-grandchildren were added, Preston and Parker."

With Barbara, he continued to give much of his time to their church, but ever the entrepreneur; Paul and Barbara founded Tilly's Gelato in 2006. It grew to become part of the fabric of Cedar Mill and continues operations today under new ownership as Libertine Deli. During the last year of his life, he was devoted to serving the young men at St. Mary's Home for Boys, a Beaverton facility for at-risk boys between the ages of 10 and 17. After learning that some of them had never had a birthday party, Paul and his brethren in the St. Pius X Knights of Columbus hosted a party for the boys once a month. He spent much of his adult life serving with the Knights of Columbus and, in March 2011, was named Knight of Knights for Assembly 3239, its first such honoree.

Gifts: In lieu of flowers, Paul requested that donations be made to: