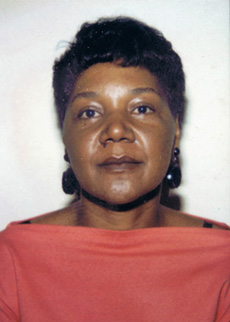 Evelyn Marie Crews, born in Multnomah County on June 14, 1947, died of cancer of unknown origin on January 27, 2011. Evelyn was the youngest child of the late Sadie Belle and Hosea Crews who came to Oregon from Alabama. Evelyn's older sister Ursula and brother Charles preceded her in death. Evelyn graduated from Jefferson High School and earned a B.S. Degree from Portland State University. Over four decades, Evelyn was an active participant in various volunteer community organizations including the Black United Front. She was a member of the Shining Star of Unity #1379 and the Mahogany Red Hatters. Evelyn could be found at marches, rallies and other cultural events that focused on Black people and what was right, just, and fair. She was a long-time community activist.

Evelyn worked a variety of jobs. Notably, she directed two YMCA afterschool programs; counseled victims of domestic violence and youth; originated the Rider Advocate Program coordinating a team that delivered customer services on Tri-Met buses; served as the first legislative assistant to then Rep. Avel Gordly; and in her later years, Evelyn worked as a school secretary at several Portland Public Schools.

Many will remember Evelyn for her involvement with Thara Memory and others in the Jazmin Community Marching Band. She and Thara got the Portland Public School Board to provide unused musical instruments for students in their all-volunteer program. The Jazmin Marching Band introduced many students to music and after being unfairly denied entry, "crashed" the Portland Rose Festival Parade becoming the first all Black band to march in the parade and the hit of the parade.

Evelyn is survived by cousins Edna Robertson, Synetta Morris, Terry Lynn and Felicia Robertson, Shelly May Penix, and Benny Blanton; nieces Sheri and Traci McAlister-Crews and Angela Golden; and nephews Uhuru, Zawdie and Karanja Crews; and a host of their children.

Evelyn was assisted in her final three months by cousin Synetta Morris and childhood friends Avel Gordly and Charlotte Rutherford who thank everyone who cared for, assisted and prayed for Evelyn's peace and comfort.

A private interment will be held at Rose City Cemetery. A Celebration of Life will be held on Saturday February 26, 2011 at Billy Webb Elk's Lodge, 6 N. Tillamook Street, Portland, from 4:00 to 7:00 p.m. Everyone who wants to celebrate Evelyn's life is invited to attend.