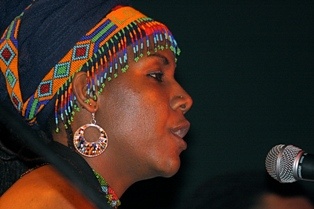 Loveness Wesa and the Bantus Band are bringing the music of southern Africa to Portland at 6:30 p.m. on Saturday, Jan. 30 at the Ainsworth United Church of Christ.
The show is a fund-raiser so Wesa's mother can get a plane ticket from Zimbabwe to Portland. The show is by donation and the band is asking from $10 to $15, although no one will be turned away if they don't have money.
Wesa is the first female artist in Zimbabwe to write, choreograph and produce dance theater shows performed by women and she is the founder of the Kgotso African Dance Theater.
The Afro-Pop style of her band is heavily influenced by traditional Ndebele/Zulu, Shona Sotho and Venda music. The members of her band, many from Oregon, have studied and travelled to Zimbabwe and other parts of Africa to study the music.
"I do all composing and arranging and give it to my musicians," she told The Skanner News. "I don't play an instrument myself… I just tell them what to play."
Members of the Bantus Band include Matt Gordon on guitar, Andrew Oliver on keyboard and trumpet, Nathan Beck on marimba, drums and mbira, Todd Ragland on bass, and Eric Orem on marimba and drums.
You can hear their music at www.bantusband.com.
Other upcoming performances include 6:45 p.m., Friday, Feb. 5 at Buckman Elementary School; Noon, March 21 at the World Trade Center; 6:30 p.m., March 22 at The Aladdin Theater.