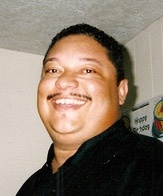 Aaron B. Pruitt died on May 16. He was 49.
Aaron was born Dec. 22, 1959 in Birmingham, Ala. to Callie K. Pruitt and Askew Benson.
Aaron B. Pruitt, there isn't enough words to explain such a dedicated, loving, successful, remarkable man. He was a hero in many eyes, especially his kids.
Anyone who knows Aaron, knew his chef ways in the kitchen. His daughters would call him a chef because of his style and passion for food. From the soul food to the goulash, it was delicious and everyone had a plate. Don't let it be a weekend, he's throwing meat on the grill and having friends and family over for a gathering. Oh, and let's not forget our Daddy was the best DJ so you know that tunes (preferably Old School) were playing in the background.
Aaron was the most amazing story teller. He would have everyone's cheeks hurting from laughing and smiling too much. He was a very family oriented man who dedicated his life to his two girls. We would love going to the beach together every summer and take each other in. The sunset, the water, the view was our thing. Don't get me wrong, as a hard working man who helped any and everyone at anytime, he loved his alone time, chillin', watching the game and telling jokes.
Aaron was preceded in death by his mother Callie Pruitt, father Askew Benson, sisters Barbra Ann Pruitt and Betty Overton, and brother Jimmy Gates. He leaves behind and watches over his daughters Nicole Pruitt and Brianna Pruitt, aunts Mary Alice Legarde and Novella Coleman, sister Carolyn Thompson, brothers Charles Gates and Robert Gates, nieces, nephews, great nieces and nephews and friends.
Arrangements by Terry Family Funeral Home.