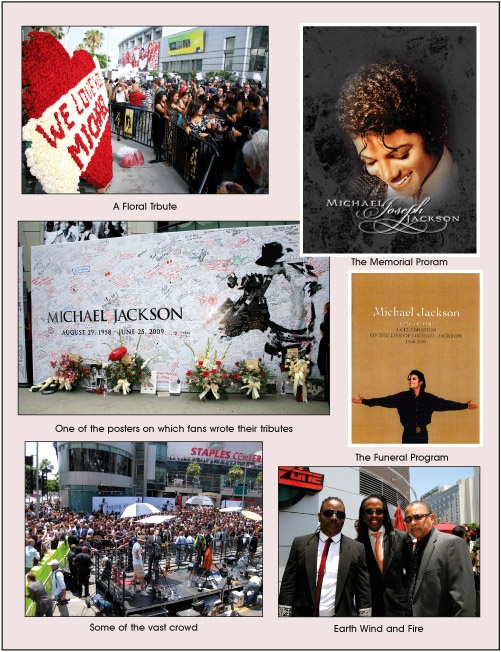 LOS ANGELES —The world's greatest entertainer, Michael Jackson, made one final jaw dropping and tear drawing appearance when Andrae Crouch's gospel group brought him into the Staples Center to the melody of "Soon and Very Soon," in an emotional memorial televised to billions on July 7.

For the estimated 20,000 on hand at the same arena where Jackson rehearsed for the final time just days before his death, his celebration of life brought home the harsh reality that the most generous entertainer the world has ever known is gone.

It was a well-crafted and fitting testimonial for a barrier-breaking performer often scorned and openly criticized for accusations unproven.

The tribute began with long moments of awkward silence before the first words were spoken.

It was then that Crouch's gospel group sang, "We are Going to See the Kfrican-Americaning" as Jackson's platinum and gold-coated casket was carried from the tunnel and near the stage to the response of abbreviated applause and gasp of silence.

The King of Pop had finally arrived, and while many have been aware of his sudden death since June 25, this time it was carving its way into the depth of our hearts and souls.

An oversized screen behind the stage reflected a sideshow of Jackson's life of photos and videos and above what would be the Lakers basketball court on the scoreboard read Michael Jackson—1958-2009!

It was a homegoing ceremony befit for an African American and world-renowned King as a galaxy of Blacks from the music and sports industry paid the ultimate respect to the ultimate game changer.

Former Lakers great and NBA Hall of Fame basketball star Earvin Magic Johnson and current Lakers star and world champion Kobe Bryant graced the stage as a pair to share reflections. A teary-eyed Johnson remembered the time he first met the pop icon and went to meet him at his home.

"He asked me what I wanted to eat and I ordered some grilled chicken and then Michael came out with a bucket of Kentucky Fried Chicken," he said to spatter of laughter and applause.

Johnson credited Jackson with influencing his career on the basketball court after touring with him and watching his performance on stage.

As the two hoop stars spoke for the sports community, multitalented Queen Latifah shared of a life where she too grew up with Jackson and his brother's songs and dance.

"No clocks can tell our time. No oceans can rush our tide. The abrupt absence of our treasure. Though we are many each of us is aching along, piercing along. Only when we confess our confusion can we remember that he was a gift to us and we did have him. He came to us from the creator trailing creativity in abundance, despite the anguish of life he received the mother love and family love and survived. He thrived with compassion, passion and humor and style. We had him," Latifah read.

She was among many who attended who were influenced by the consummate showman, including the likes of Chris Brown, Usher, P. Diddy, Lil Kim, Mariah Carey, Lionel Richie and Robinson.

Legendary boxing promoter Don King flew from Florida to be with the family and mourn his friend.

King said after the ceremony, "The same laws that govern the nation were applicable to Michael Jackson and he was not proven guilty of anything in a court of law and his fitting tribute should not be scarred by that. His legacy will live forever."

It was Jackson who, as Rev. Al Sharpton so eloquently stated, put on one sequined glove and pulled up his pants and brought down the curtain that would open a world of opportunity for African Americans.

While it may have began with him being the first Black artist to have his videos played on MTV, it would also challenge a nation and world who were not comfortable with Blacks to embrace them and keep an open mind about their culture long after Jackie Robinson integrated professional baseball.

His legion of fans, those who grew up with him such as this writer and those who came to know him when he would keep establishing and breaking his own stratospheric barriers, frequently displayed a cult loyalty that even in his demise could not be altered.

Expectant mother Jennifer Hudson, who has experienced her own personal family tragedies, sang another of Jackson's hit tunes "Will You be There" and arguably the most touching moment came when Stevie Wonder told the audience, "This is a moment that I wished I didn't live to see."

It was Wonder who was also a child act with Motown before Jackson and his brothers arrived.

Motown founder Berry Gordy said calling Jackson the King of Pop was not high enough accolades, telling the audience, "I think he simply the greatest entertainer that ever lived."

Longtime Jackson childhood friend Brooke Shields was choked with gripping emotion and struggled with sharing her moments with her friend, but she told the crowd that Jackson's favorite song was one by Charlie Chaplin, a tune that he never recorded called "Smile."

Afterwards, his closest sibling brother Jermaine Jackson stepped on stage to sing, "Smile" and despite fighting tears, he made it through in flying colors.

The person who drew the most animated applause was Rev. Sharpton who eulogized, "Every time he got knocked down, he got up," as the crowd roared to a standing ovation that interrupted his speech for at least two minutes.

To his children, Sharpton implored, "There was nothing strange about your daddy. It was strange what your daddy had to deal with."

Sharpton told the audience that many of the fans who grew up with Jackson would ultimately vote and bring about the first Black president in America history in electing Barrack Obama.

Congresswoman Sheila Jackson Lee (D-Texas) told the crowd, "As a member of Congress we understand the Constitution and a man is innocent until proven guilty," to a rousing applause referencing Jackson's allegations of child molestation.

Rep. Lee and the House of Representatives will be voting on a resolution that will classify Jackson as an American Legend and Icon.

Sharpton was one of three noted Blacks from the religious sector that also included The Rev. Lucious W. Smith of Friendship Baptist Church in Pasadena, who was the first of the pastors to speak, and noted civil rights leader and family friend Rev. Jesse Jackson who was not on the program.

"As long as we remember him, he will always be there to comfort us," said Smith.

Jackson, who died at the age of 50, was represented by his brothers, who served as pallbearers while wearing a sequined glove on hand in tribute, and sisters Rebbie and Janet.

His death has created a storm of controversy as to what caused him to die abruptly and five doctors who may have treated or prescribed medications to the star are currently being questioned by law authorities.

Singers, family members and speakers all filled the stage at the conclusion of the ceremony and sang "We Are The World" a song Jackson co-wrote with Richie, but the most powerful moment came at the absolute end when his 11-year old daughter Paris Michael Jackson was encouraged to give last thoughts by brother Marlon.