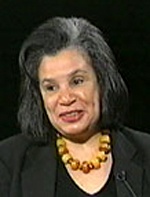 LOS ANGELES (AP) — Nancy Hicks Maynard, the first Black female reporter at The New York Times who, with her husband, became publisher of the Oakland Tribune and the founder a renowned institute that trains minority journalists, has died. She was 61.
Maynard died Sunday, said the Maynard Institute for Journalism Education. She had been ill for several months.
"She was a fearless, astute champion of diversity in news media," A. Steve Montiel, a former president of the institute, said in a statement posted on the site. "We've lost a leader who made a difference."
The former Nancy Hicks began her journalism career in the mid-1960s at the New York Post. Later, at age 23, she became the first Black female reporter at The New York Times.
After marrying Washington Post reporter Robert C. Maynard in 1975, the couple helped found the nonprofit institute that bears their name to train minority journalists.
As president of the institute, she made it "a leader in training, not only for reporters, but also for editors—the decision makers on who gets hired and how news events are covered," said Frank O. Sotomayor, associate director of the University of Southern California's Annenberg Institute for Justice and Journalism.
"She shared with her late husband, Bob, the vision and goal of giving readers and other media consumers a more complete view of what was occurring in all communities," he said.
In 1983, the couple purchased the financially struggling Oakland Tribune from Gannett Co. They sold it in 1992 as Robert Maynard was struggling with prostate cancer. He died the following year. The paper remains the only major metropolitan daily to have ever been Black-owned.
In the years after her husband's death, Maynard focused on writing, consulting and continuing to advocate for newsroom diversity.
Survivors include her partner Jay T. Harris; sons David and Alex; and daughter Dori.