Biden Honors 'Giant of Our History' Bob Dole at US Capitol 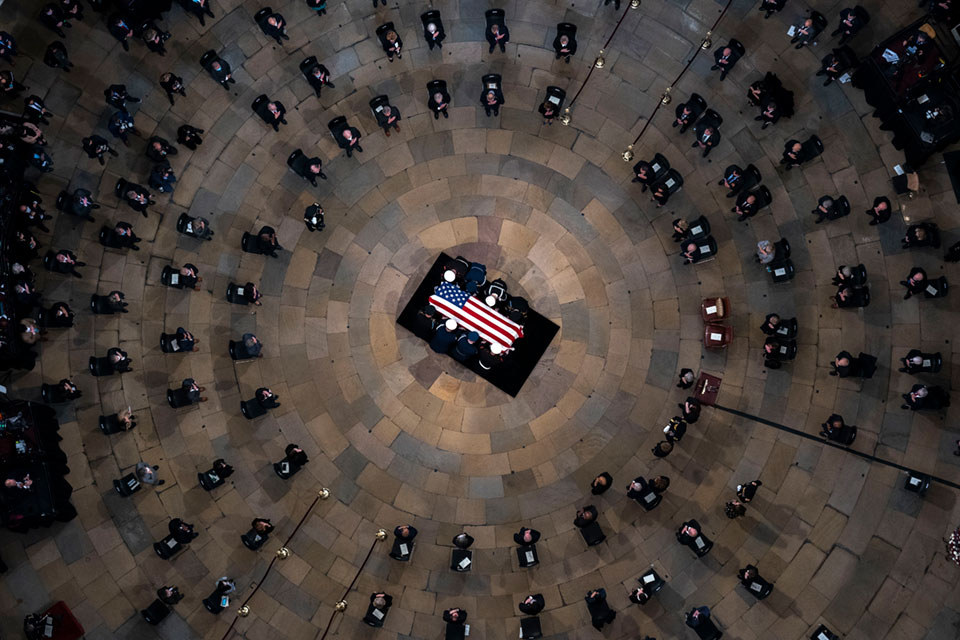 WASHINGTON (AP) — Bob Dole lay in state Thursday at the U.S. Capitol, as the president and others gathered to pay tribute to a “giant of our history” who served the country in war and in politics with pragmatism, self-deprecating wit and a bygone era's sense of common civility and compromise.

President Joe Biden, a longtime friend, said Dole, the former Republican senator, presidential contender and World War II veteran, should have the final word as he read from his colleague of 25 years' own observation that he had served the country best when putting “principles over party.”

“Truth of the matter is, as divided as we are, the only way forward for democracy is unity — consensus -- the only way,” Biden told those gathered. “We may follow his wisdom and his timeless truth and reach consensus on the basic fundamental principles we all agree on.”

The morning ceremony brought about 100 invited guests and congressional leaders as Dole's casket, draped with the American flag, sat under the dome. Dole, who served nearly 36 years in Congress, died Sunday at the age of 98.

Biden said Dole “belongs here, in this place, this temple to liberty and temple to possibility.” The president said of Dole: “He, too, was a giant of our history.”

The service will be the first of several in Washington commemorating Dole’s life and legacy. Thursday’s event at the Capitol and Friday's funeral at the Washington National Cathedral are closed to the public. But Dole's funeral will be livestreamed at the World War II Memorial on the National Mall, and his motorcade is expected to stop by later at an event with actor Tom Hanks honoring his life and military service before the casket travels to his Kansas hometown and the state capital. 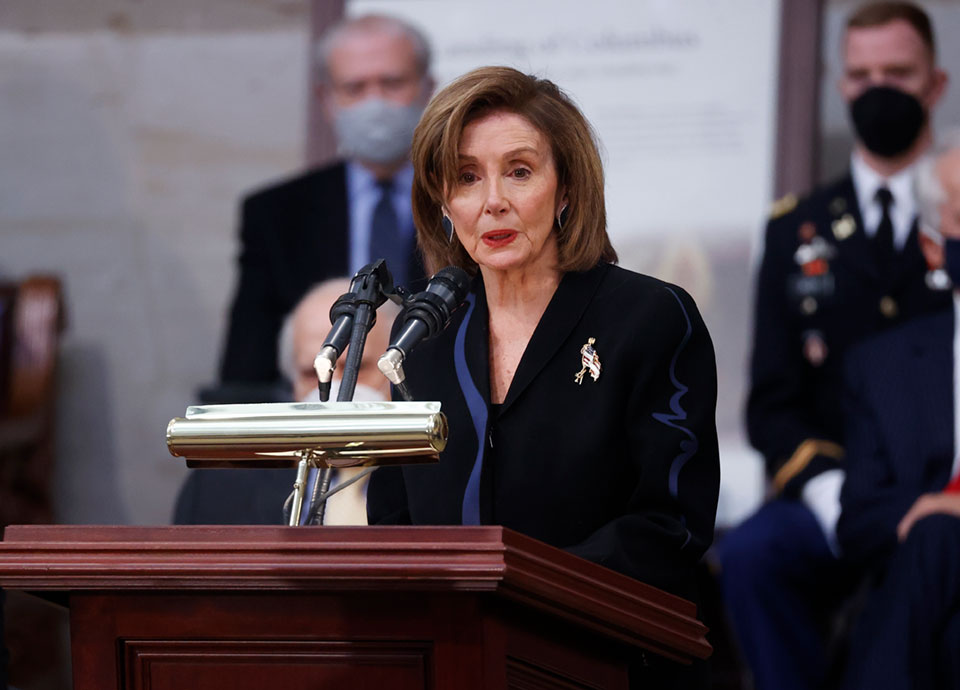 House Speaker Nancy Pelosi of Calif., speaks near the casket of former Sen. Bob Dole, who died on Sunday, during a congressional ceremony to honor Dole, who lies in state in the U.S. Capitol Rotunda in Washington, Thursday, Dec. 9, 2021. (Jonathan Ernst/Pool via AP)

House Speaker Nancy Pelosi said Dole was being honored among the “pantheon of patriots” — his casket placed atop the Lincoln catafalque that has been used since 1865.

Pelosi kissed the hand of Dole's wife, Elizabeth Dole, and his daughter, Robin Dole, who were seated near Biden, before telling those gathered that Dole's “principled leadership” was long respected “on both sides of the aisle, both sides of the Capitol.” 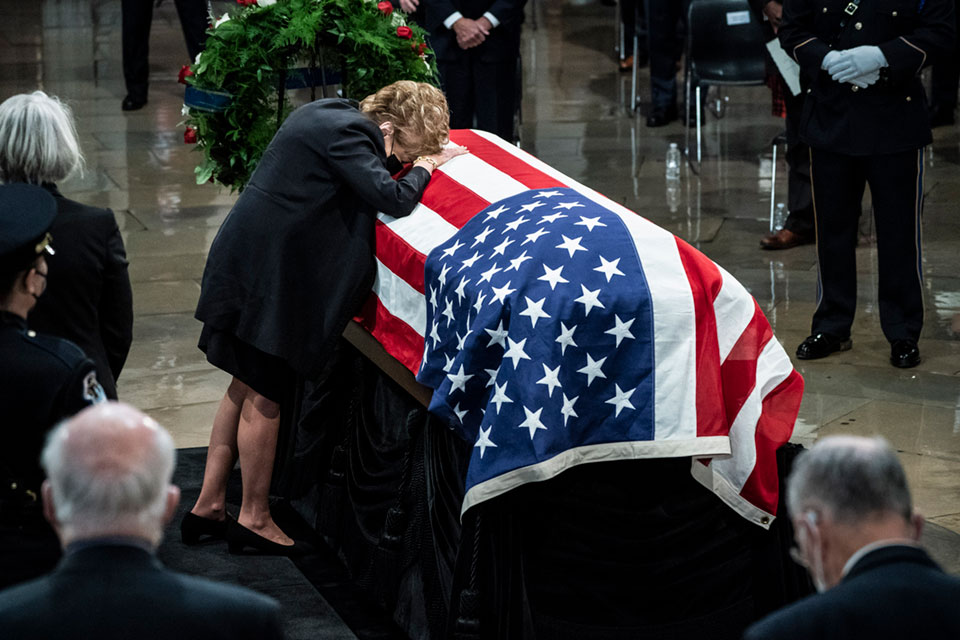 Former Sen. Elizabeth Dole, rests her head on the casket of her husband, former Sen. Bob Dole of Kansas, as he lies in state in the Rotunda of the U.S. Capitol, Thursday, Dec. 9, 2021 in Washington. (Jabin Botsford/The Washington Post via AP, Pool)

Black draperies hung on doorways under the Capitol dome in preparation for the service. The chairs were set up, socially distanced for COVID-19 protocols. A lectern was positioned in a way that the statue of another Kansas stateman, Dwight Eisenhower, would be seen in the background behind the day's speakers.

Elizabeth Dole appeared to cry as she approached the casket and reached out her hand. She and first lady Jill Biden blew kisses to one another before the president spoke.

“We can say with certainty that Eisenhower isn’t the only Kansan who meets those standards,” McConnell said in a speech earlier this week.

McConnell had raised concerns that an event planner for the memorial service, Tim Unes, had been subpoenaed by the House committee investigating the deadly Jan. 6 attack on the Capitol about his role planning that day for Donald Trump, the former president, according to a person granted anonymity to discuss the private conversation. Trump had urged his followers to head to the Capitol to fight the certification of Biden's election victory.

Dole family spokesperson Steve Schwab said in a statement Thursday that Unes' role had been terminated.

Schwab said Unes, a former Dole campaign staffer, had “volunteered his time to serve on the advance team for this week’s memorial events.” Schwab said Elizabeth Dole, “was previously unaware” of Unes' participation and once he made her aware she "terminated his volunteer role.”

Unes did not immediately respond to a request for comment. The story was first reported by The New York Times.

Born a child of the Dust Bowl in Russell, Kansas, Bob Dole suffered paralyzing and near-fatal wounds after being shot in World War II that sent him home with a severely damaged right arm that he could not use to shake hands. Instead, Dole held a pen in it and reached out with his left as a way to put greeters at ease. His town had raised funds to help in his recovery.

After earning a law degree, he worked as county attorney and served as a Kansas state legislator before running for Congress in 1960, joining the House for eight years then going on to win the Senate seat. He was the GOP's presidential nominee in 1996, his third and final campaign for president — a race he never won.

Dole’s quick wit was on display after losing the presidential contest to incumbent Democrat Bill Clinton, who awarded him the Presidential Medal of Freedom days before the 1997 inauguration.

McConnell said this week that when it was time for Dole’s remarks, he stood at the podium and began: “I, Robert J. Dole … do solemnly swear … oh, sorry, wrong speech!” 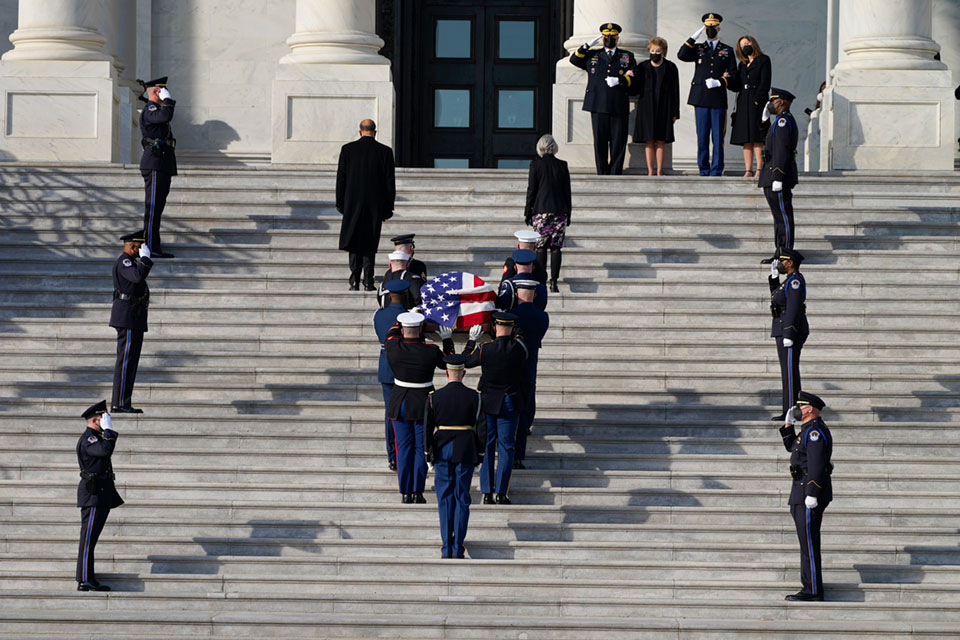 A joint services military bearer team moves the casket of former Sen. Bob Dole, R-Kan., during arrival at the U.S. Capitol, where he will lie in state in the Rotunda, Thursday Dec. 9, 2021, on Capitol Hill in Washington, as Elizabeth Dole and daughter Robin watch at top right. (AP Photo/Jacquelyn Martin)

But that humor was rarely seen on the campaign trail or in his public pronouncements, where it could have helped him win more votes.

Instead, Dole was seen as a GOP “hatchet man,” a mentee of Richard Nixon and chairman of the Republican National Committee during the Watergate era. He went on to become the sharp-tongued vice presidential running mate to Gerald Ford, another lost race.

On Thursday, McConnell noted that Dole was “the last of the greatest generation to run for president.”

But it was Dole's long career in the Senate where he grew to see the value of reaching across the aisle to Democrats and secured his more lasting achievements — most notably the Americans with Disabilities Act that to this day ensures a level of accessibility as a civil right.

At times, Dole bucked his own party, particularly on a landmark tax bill, and helped create the Martin Luther King Jr. federal holiday.

Senate Majority Leader Chuck Schumer praised Dole during Thursday's service as an American “who redefined and elevated what it means to serve country.”

Current and former lawmakers from both parties joined the service. House Republican leader Kevin McCarthy joined but did not speak.

Dole announced in February 2021 a diagnosis of stage 4 lung cancer. Biden visited him at his home at the Watergate complex.

A few hours before the memorial was set to begin, Capitol Police locked down part of the Capitol complex after a staffer walked into an office building with a gun in his bag. The man was arrested on a charge of carrying a pistol without a license.