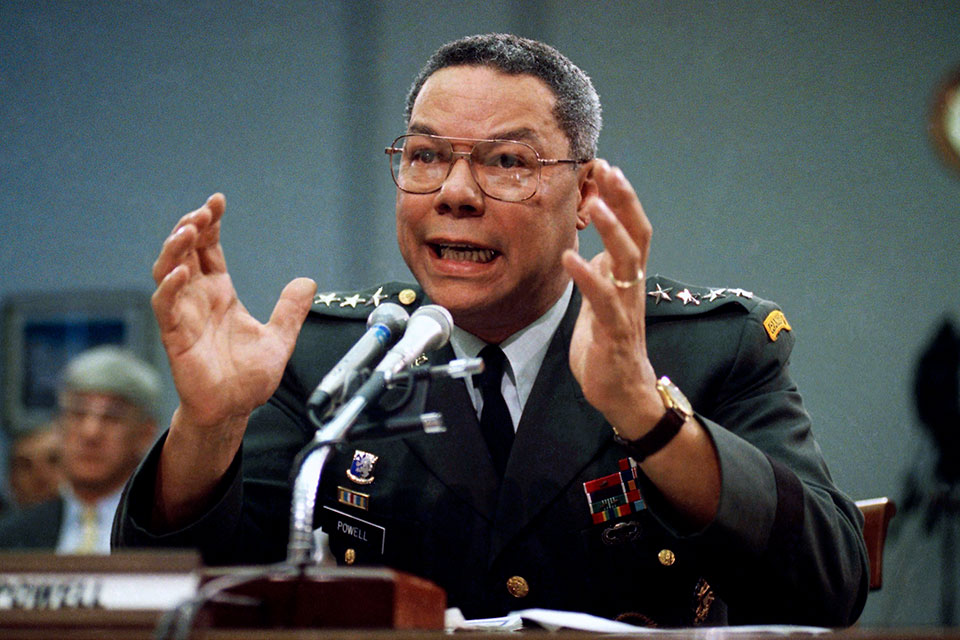 WASHIINGTON (AP) — Colin Powell, the boundary-breaking military leader and diplomat whose sterling reputation of service to Republican and Democratic presidents was stained by his faulty claims to justify the 2003 U.S. war in Iraq, died Monday of COVID-19 complications. He was 84.

A veteran of the Vietnam War, Powell spent 35 years in the Army and rose to the rank of four-star general before becoming the first Black chairman of the Joint Chiefs of Staff. His oversight of the U.S. invasion of Kuwait to oust the Iraqi army in 1991 made him a household name, prompting speculation for nearly a decade that he might run for president, a course he ultimately decided against.

President George W. Bush chose Powell to become secretary of state, the first Black person to represent the U.S. on the world stage. His tenure, however, was marred by his 2003 address to the U.N. Security Council in which he cited faulty information to claim that Iraqi leader Saddam Hussein had secretly stashed weapons of mass destruction. Such weapons never materialized, and though Saddam was removed, the war devolved into years of military and humanitarian losses. 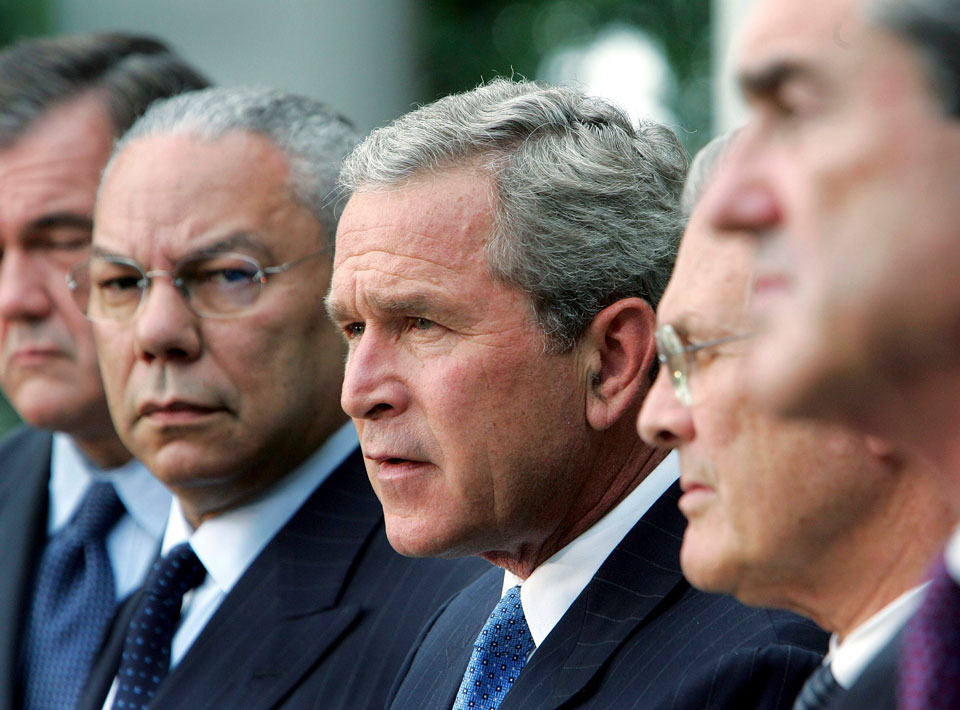 In this Aug. 2, 2004 file photo, President Bush, center, makes remarks in the Rose Garden of the White House, about his plans to implement the Sept. 11. Commission's recommendation to create a national intelligence director. Left to right Secretary of Homeland Security Tom Ridge, Secretary of State Colin Powell, Bush, Secretary of Defense Donald H. Rumsfeld, and FBI Director Robert Mueller. Powell, former Joint Chiefs chairman and secretary of state, has died from COVID-19 complications. In an announcement on social media Monday, the family said Powell had been fully vaccinated. He was 84. (AP Photo/Ron Edmonds)In announcing his death on social media, Powell’s family said he had been fully vaccinated against the coronavirus.

Peggy Cifrino, Powell’s longtime aide, said he had also been treated over the past few years for multiple myeloma, a blood cancer that impairs the body’s ability to fight infection. Studies have shown that those cancer patients don’t get as much protection from the COVID-19 vaccines as healthier people.

At the White House, President Joe Biden said Powell “embodied the highest ideals of both warrior and diplomat.”

Noting Powell's rise from a childhood in a fraying New York City neighborhood, Biden said, “He believed in the promise of America because he lived it. And he devoted much of his life to making that promise a reality for so many others.”

The family's announcement said, “We have lost a remarkable and loving husband, father and grandfather and a great American,.”

Flags were ordered lowered at the White House, State Department, Pentagon and other government buildings.

After the 9/11 attacks in 2001, Powell was the first American official to publicly lay the blame on Osama bin Laden’s al-Qaida network. He made a lightning trip to Pakistan in October of that year to demand that then-Pakistani President Pervez Musharraf cooperate with the United States in going after the Afghanistan-based group, which also had a presence in Pakistan, where bin Laden was later killed.

As George W. Bush’s first secretary of state, Powell led a State Department that was dubious of the military and intelligence communities’ conviction that Saddam possessed or was developing weapons of mass destruction. And yet, despite his reservations, he presented the administration’s case that Saddam indeed posed a major regional and global threat in a speech to the U.N. Security Council in February 2003. The following month, Bush gave the go-ahead for the invasion. 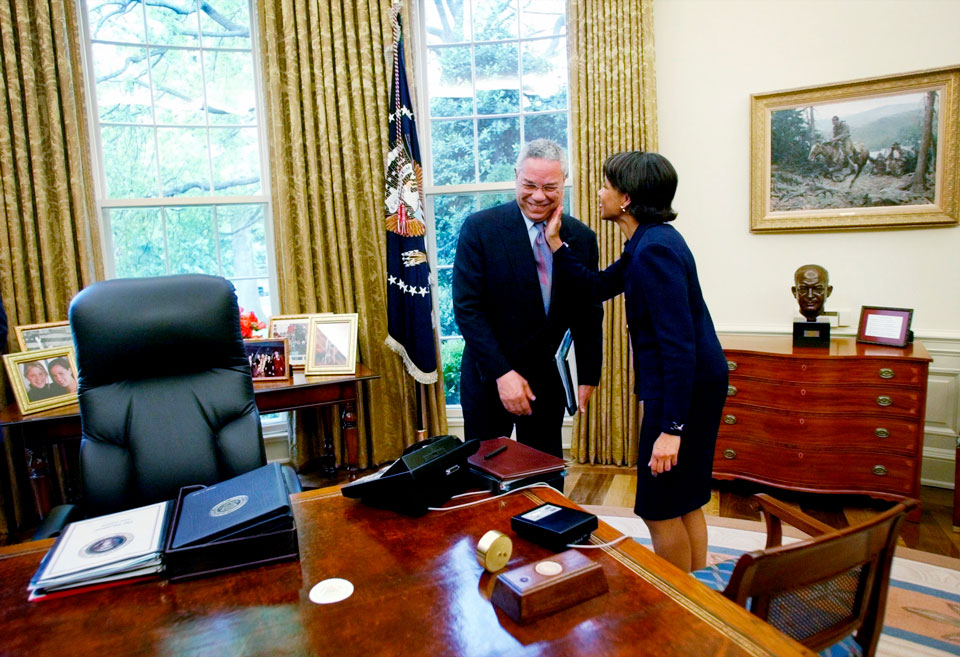 In this May 7, 2002 file photo, Secretary of State Colin Powell receives a pat on the cheek from National Security Adivisor Condoleezza Rice, right, in the Oval Office during the meeting between President Bush, and Prime Minister of Israel Ariel Sharon at the White House in Washington. Powell, former Joint Chiefs chairman and secretary of state, has died from COVID-19 complications. In an announcement on social media Monday, the family said Powell had been fully vaccinated. He was 84. (AP Photo/Pablo Martinez Monsivais, Pool)The U.N. speech, replete with Powell's display of a vial of what he said could have been a biological weapon, was seen as a low point in his career, although he had removed some elements from the remarks that he deemed to have been based on poor intelligence assessments.

The U.S. overthrow of Saddam ended the rule of a brutal dictator. But the power vacuum and lawlessness that followed the invasion unleashed years of deadly sectarian fighting and chaos that killed countless Iraqi civilians, sparked a years-long insurgency, and unintentionally tilted the balance of power in the Middle East toward a U.S. rival, Iran. No Iraqi weapons of mass destruction were ever found.

Still, Powell maintained in a 2012 interview with The Associated Press that on balance, the U.S. succeeded in Iraq.

“I think we had a lot of successes,” he said. “Iraq’s terrible dictator is gone.”

Saddam was captured by U.S. forces while hiding out in northern Iraq in December 2003 and later executed by the Iraqi government. But the war dragged on. President Barack Obama pulled U.S. troops out of Iraq in 2011, but he sent advisers back in 2014 after the Islamic State group swept into the country from Syria and captured large swaths of Iraqi territory.

“He was a great public servant” and “widely respected at home and abroad,” Bush said.

“And most important, Colin was a family man and a friend. Laura and I send Alma and their children our sincere condolences as they remember the life of a great man.”

Moved away from the Republican party 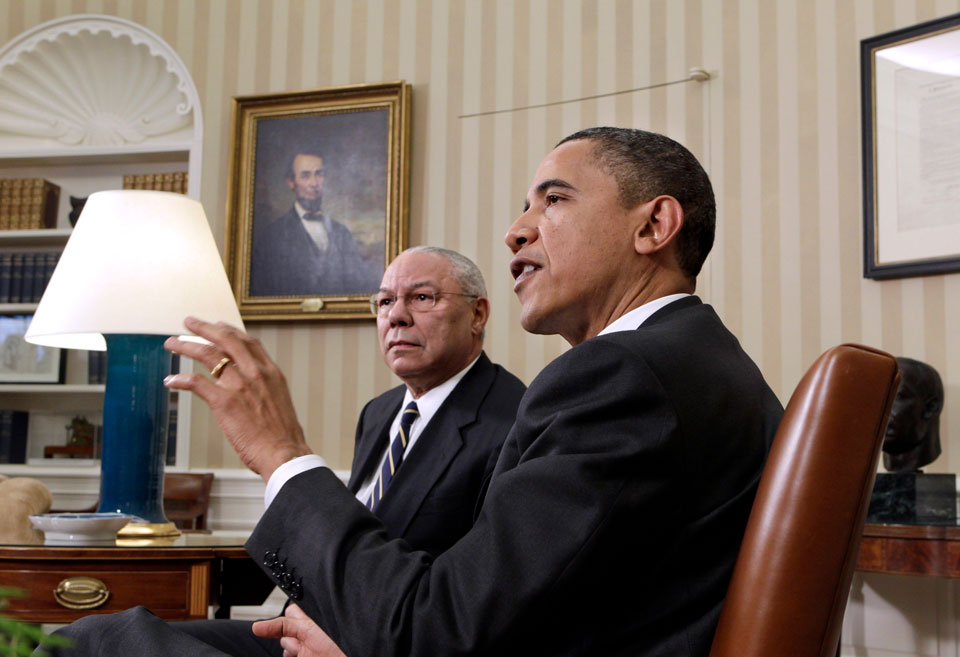 In this Dec. 1, 2010 file photo, President Barack Obama talks with reporters after his meeting with former Secretary of State Colin Powell, left, on the importance of ratifying the New START Treaty, in the Oval Office at the White in Washington. Powell, former Joint Chiefs chairman and secretary of state, has died from COVID-19 complications. In an announcement on social media Monday, the family said Powell had been fully vaccinated. He was 84. AP Photo/J. Scott Applewhite)Powell gained national prominence under Republican presidents and considered a presidential bid of his own, but ultimately moved away from the party. He endorsed Democrats in the past four presidential elections, starting with Obama. He emerged as a vocal Donald Trump critic in recent years, describing Trump as “a national disgrace” who should have been removed from office through impeachment. Following the Jan. 6 storming of the U.S. Capitol, Powell said he no longer considered himself a Republican. 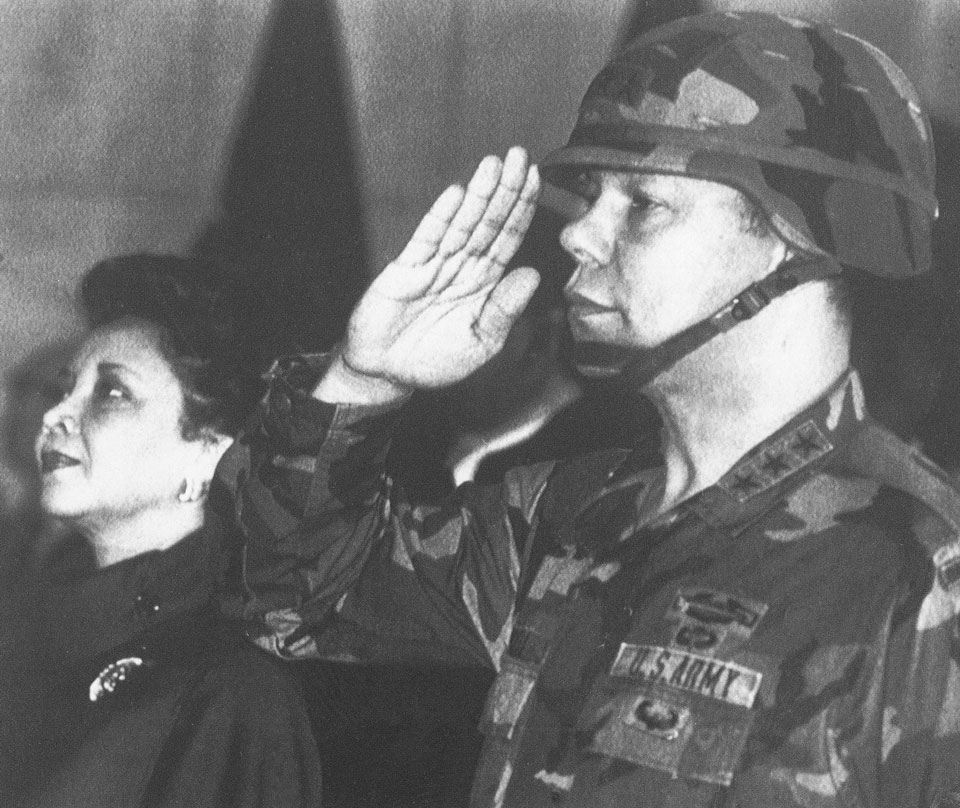 In this Dec. 30, 1986, file photo, U.S. Lieutenant General Colin Powell, commander of the 5th U.S. corps, salutes while his wife Alma stands in attention during a farewell ceremony in Frankfurt. Powell, who went on to become the chairman of the Joint Chiefs and U.S. secretary of state, has died from COVID-19 complications, his family said Monday, Oct. 18, 2021. (AP Photo/Udo Weitz)No child of privilege, Powell rose through the military ranks and then became the nation’s chief diplomat. “Mine is the story of a black kid of no early promise from an immigrant family of limited means who was raised in the South Bronx,” he wrote in his 1995 autobiography “My American Journey.”

At City College, Powell discovered the ROTC. When he put on his first uniform, “I liked what I saw,” he wrote.

He joined the Army and in 1962 he was one of more than 16,000 military advisers sent to South Vietnam by President John F. Kennedy. A series of promotions led to the Pentagon and assignment as a military assistant to Secretary of Defense Caspar Weinberger, who became his unofficial sponsor. He later became commander of the Army’s 5th Corps in Germany and later was national security assistant to President Ronald Reagan.

During his term as Joint Chiefs chairman, his approach to war became known as the Powell Doctrine, which held that the United States should only commit forces in a conflict if it has clear and achievable objectives with public support, sufficient firepower and a strategy for ending the war.

Defense Secretary Lloyd Austin, a retired Army general, said the news of Powell's death left “a hole in my heart.”

“The world lost one of the greatest leaders that we have ever witnessed,” Austin said while traveling in Europe.

Condoleezza Rice, Powell's successor at State and the department's first black female secretary, praised him as “a trusted colleague and a dear friend through some very challenging times.”

Powell’s appearances at the United Nations as secretary of state, including his Iraq speech, were often accompanied by fond reminiscing of his childhood in the city, where he grew up the child of Jamaican immigrants who got one of his first jobs at the Pepsi-Cola bottling plant directly across the East River from the UN headquarters.