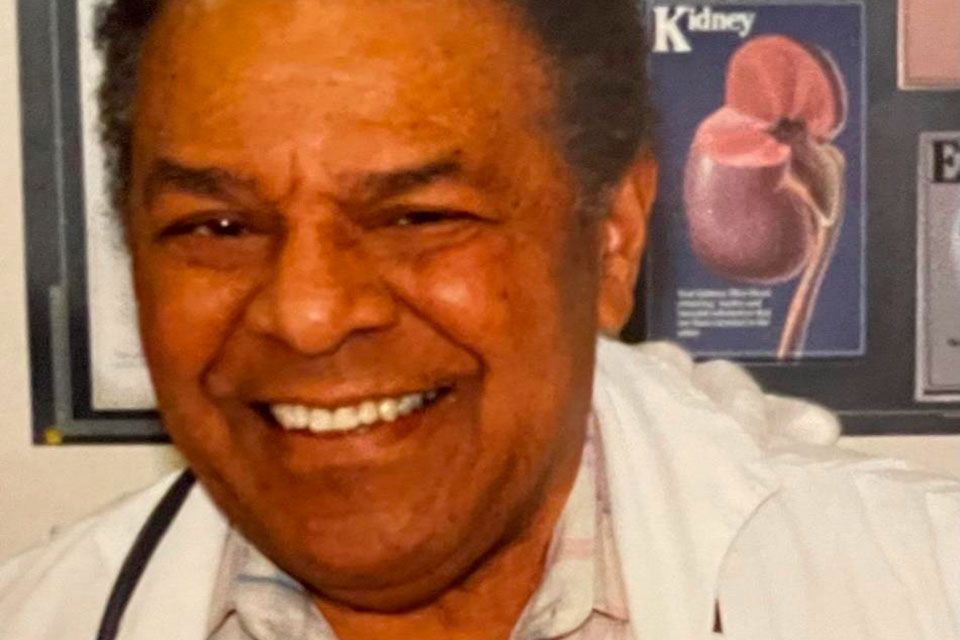 Dr. Walter C. Reynolds, died at the age 100 of non-COVID causes, on Tuesday, Nov. 17, 2020 in hospice with family and loved ones saying their goodbyes, at Legacy Mt. Hood Medical Center in Gresham, Oregon.

Walter, or “Buster,“ to his close friends was the last living child of Phil and Elise Reynolds: Jack Frederick Reynolds (Seattle, d. 1996), Robert “Bob” Reynolds (Los Angeles, d. 2013), and Phyllis Reynolds Smith (Portland, d. 2018). The Reynoldses were a pioneering Black family in Portland, one of the first to integrate the Roselawn area in the 1920s. They withstood violence and injury from Klu Klux Klan riders on horseback who destroyed their home, but not their spirit. A graduate of Jefferson High School in 1938, Walter never gave up his dream of becoming a doctor, even after a school counselor told him being a doctor was not possible for a “colored boy.”

Walter’s motivation to become a doctor came from his father, who arrived in Portland from Decatur, Georgia with a 5th grade education. His father, who worked on the railroad believed in him, and that education was the pathway to advancement for Black young men and women. After serving in the U.S. Army earning the distinction of “Best Cadet,” and in the U.S. Air Force, as one of few Black flight surgeons, Walter was honorably discharged with the rank of Captain. Commanding officers offered Walter a military career with the rank of Major but Walter, a husband and father of three at the time, he had other goals in mind. According to his niece and Goddaughter, Rebecca Reynolds, who interviewed him for her master’s thesis in 2013, “Uncle Walter was deeply disappointed that he could not join the Tuskegee Airmen because he was nearsighted.”

After the military, Walter returned to his hometown of Portland, OR and completed Medical School at the University of Oregon, now the Oregon Health Sciences University. Walter was the first Black graduate of OHSU in 1949.

Years later, he served as President, of the School of Medicine Alumni Association, and assisted the Dean with minority student recruitment. In 2007, OHSU named one of their two aerial transportation trams for him. His is named “Walt” and the other “Jean,” for the first woman civil engineer graduate from Oregon State University. The OHSU tram dedication that year was featured in The New York Times and highlighted the university’s innovative aerial transportation system.

Upon graduation, Walter was offered his first job by his mentor and friend, Dr. DeNorval Unthank (Portland, d. 1977). Walter and Dr. Unthank were the only two Black physicians practicing medicine in Portland for many years. While Walter’s family grew (a son born in 1953, and two daughters born in 1958, and 1961), he started a private medical practice at 15 N. Morris Street. He offered space in his office to local Nurse Practitioners, Ms. Juretta Webb, and Ms. Mariah A. Taylor. Both were credited with starting the first Black-owned and operated clinic of its kind in the U.S. and were recognized in Y2000 on The Oprah Winfrey Show. Walter continued to break down barriers in the medical profession. He was the first Black physician to hold the position of Medical Staff President (1971-1972) at Emanuel Hospital, now Legacy Emanuel Medical Center.

Michael Alan Reynolds, Walter’s oldest son recalls family talks that expressed, “How Dad took a ‘leap of faith’ to realize a long-held goal of opening a ‘state-of-the-art’ medical clinic. The structure was an architectural stand-out for its time, named in honor of his father. The Phil Reynolds Medical Clinic was located on N. Williams Avenue, near Emanuel Hospital, where Dawson Park is now. The clinic was one of the first to computerize patient files, with an efficient pharmacy owned by Dad and run by Mr. Ashwin Patel. Dad’s multi-talented friend, Mr. Champak Patel, also from India was the Medical Technician. Mrs. Phyllis Reynolds Smith, an RN and Mrs. Marlene Fuller, the Office Administrator completed the team.” We siblings, as teenagers, were inspired to work during the summer in the clinic.

Michael also credits his father with teaching him that “people of all cultures and walks-of-life must be valued, and that everyone deserves quality healthcare regardless of race, economic status, gender, or age. As children we grew up recognizing what good medicine looks like, because we saw it practiced everyday by our father who respected and loved treating his patients. Early-on, Dad practiced medicine during the days when doctors made house calls and the family’s home phone was also Dad’s work phone. He spent his life running the clinic and healing others, until he retired in 1999 at 79 years of age.”

During the 50 years Walter C. Reynolds practiced medicine, he never forgot his immediate and extended family, friends, or the community. How he found the time has always been a mystery to his family. His youngest daughter,
Lori Suzanne Reynolds Nischol, has many fond memories of her father. She remembers, “Dad always emphasized the importance of learning something new each day. He used to say, ‘Add something new to your armamentarium.’ At the age of seven, I thought Dad had made up the word. It was not until much later, with children of my own, did I accidently find the word armamentarium in the dictionary, meaning a storehouse of knowledge. Dad was trying to teach me: ‘Life is tough, but you have to be tougher.' This belief was passed on to my sons.” Walter wanted his children to understand that knowledge builds strength and learning something new each day adds to that knowledge.
Elizabeth (Liz) Ann Reynolds Thomas, Walter’s firstborn has been influenced by her parents’ dedication to servicing others, “Dad gave back to the Portland community in so many ways, while working full-time as a physician with a wife and six children. He learned about community service from his father and mother. Dad’s mother, Elise Reynolds, was the first Black woman selected in 1957, as Oregon Mother of the Year. Dad followed in his father’s footsteps and served as Executive Director of the Portland NAACP. He also served as President of the Portland Urban League (1959). Both were volunteer positions without pay.”

Walter also supported his father’s belief that the Black community had to build economic wealth to survive. Liz learned recently, “My father was a member of the NAACP’s credit union, which was established in 1957 by his father, Phil Reynolds, and other Black community leaders. Ultimately, the NAACP credit union merged with the Hacienda and MultCo community credit unions, now known as Point West Credit Union (PWCU), in Portland. Our Dad was a loyal member of PWCU until he passed.” Beginning in the 1970s, Walter and his siblings sponsored for over 20 years, The Reynolds Family Scholarship, to help high school graduates of color to attend college.

As one of the first Black board of directors, for the Oregon Community Foundation, Walter was reappointed for multiple terms. He was a member of the Black fraternity, Alpha Phi Alpha, and was a Connecting Link, husband of Mildred E. Squires Reynolds, who was a charter member of Portland (OR) Chapter (1957), The Links, Inc., and the Zeta Sigma Omega Chapter (1955), Alpha Kappa Alpha Sorority.

Walter Scott Reynolds, the youngest son vividly remembers, “Dad loved sports of any sort, especially basketball and football. Dad and his brother, Uncle Bob were the first Black players for the University of Oregon, varsity basketball team. I learned perseverance from Dad in the face of great odds. We, as kids also learned to compete and have fun with all kinds of family games. Dad taught us to play chess, table tennis, backgammon, Monopoly, and an intense game of Scrabble. Family gatherings would not be complete without several card games after dessert. He was a movie buff and loved taking us to the newly released movies at the Malls on holidays!”

Walter Scott recalls that “talking politics, the latest local and world news was also a family matter. Dad was a philosopher who also took his children fishing. He drove the family to sites like Mt. Shasta, Crater Lake, and the Oregon Caves when Black families in Oregon had to drive through without stopping at hotels along-the-way. Dad always told us not to be afraid of life! Through friendships based on mutual respect that he formed while at University of Oregon, Dad and our family were able to stay safely at beach hotels in the late 1950s and early 1960s, which typically were off limits.”

Walter enjoyed visiting Seattle with his partner Beverly Hilliard for holidays, graduations, and relaxing times with good friends. Walter looked forward to seeing his children and adored his grandchildren. He always remembered celebrating Christmases and the birthday of his only granddaughter, Ifé A. Thomas, on December 23rd. Ifé and “Popi” shared a love for all kinds of music, and he was one of her biggest entertainment fans! Over the years, Dad and Beverly traveled to New Jersey to visit his grandsons, Arjun and Armaan Nischol. While in the area, they experienced the sights of New York City, Broadway plays, and U.S. Open tennis tournaments.

Dad loved his nieces, nephews and extended family who reside in cities across the U.S., and globally in Vancouver B.C., Mumbai and New Delhi, India.