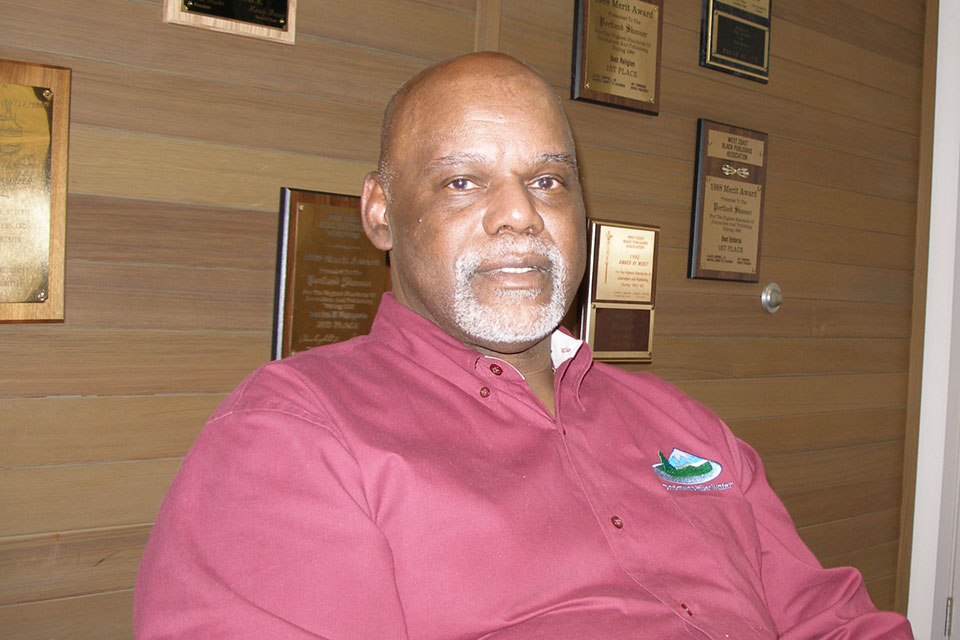 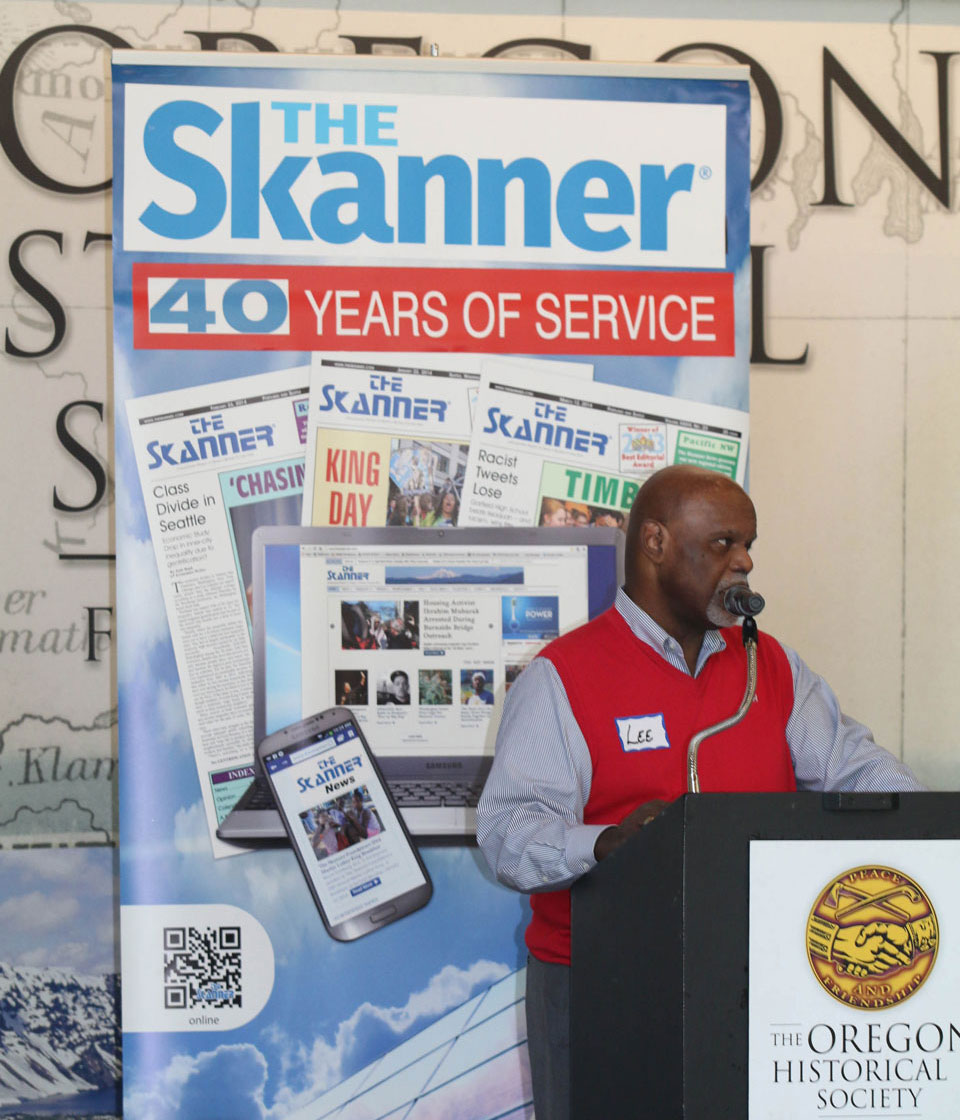 Lee Moore delivers an introduction to the film screening of The Wake of Vanport at The Oregon Historical Society in April 2016. (Photo/The Skanner Archives) A key figure who impacted the course of Oregon history, Lee served as a turnaround expert for big institutions including the Oregon Bureau of Labor, the Oregon Department of General Services, Tektronix and Precision Castparts.

Lee described himself as “basically a detail guy who asks a lot of questions, likes to know how things work and are put together.”

Moore’s parents traveled to Oregon during World War II for jobs at the shipyard, where Audrey was a real-life Rosie the Riveter. Lee was two years old when the Vanport flood destroyed the city. You can listen to his oral history of what happened to his family in the video below. 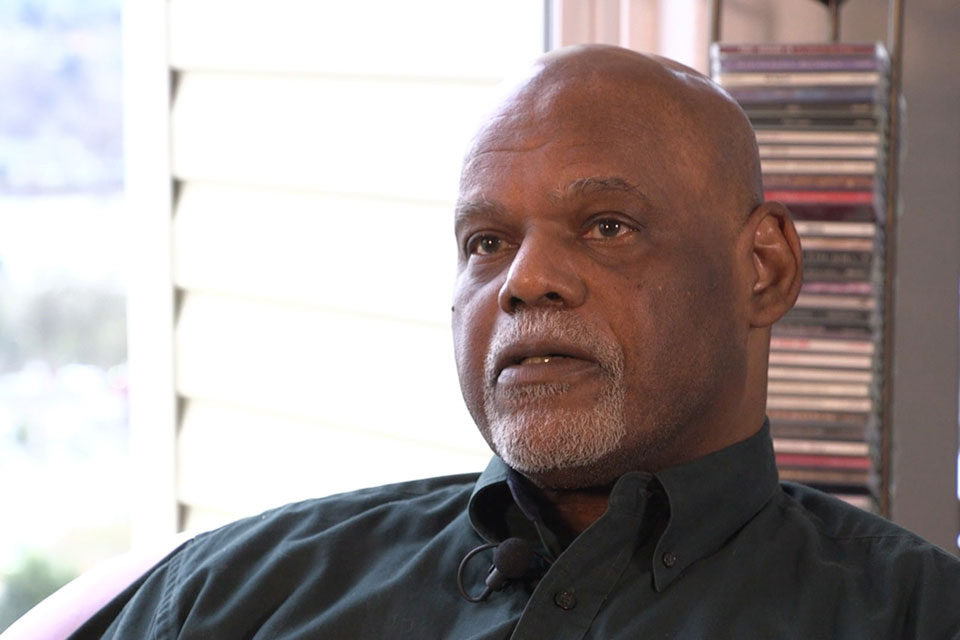 In this film still from The Wake of Vanport, Lee Moore shares his experience as a child living in Vanport at the time of the flood. Lee lived in public housing as a baby, which many observers recalled years later when he worked to help rebuild New Columbia -- the biggest housing project in Oregon history. In 1951, Lee’s parents built a home in a White residential area of the St. Johns neighborhood, where Lee went to Peninsular Grade School -- both the old and the new. He attended Roosevelt High School, where he was All State and All City in football, graduating in 1965.

Lee married his wife, Pamela Ane Moore, in Edmonton, Alberta, on April 10, 1978. His life goal was to achieve an optimum balance of family, community, and career.

“This was the genesis of my volunteer work,” Lee said. “Family first, because they are my life.”

His hobbies and special interests were twofold: construction projects and community service. He loved camping, riding his bike, and walking.

Lee led reorganizations, but he started out as a law enforcement officer who built programs in public schools. Working as a Portland police officer assigned to schools in the North and Northeast parts of the city, he established relationships with kids and worked with school staff to protect the students against gang activity and drug sales. Lee also worked with Multnomah County, Clackamas County, and the Washington County Sheriff’s Department on their contacts with students. For his efforts, he received a Law Enforcement Executive Policy (LEEP) Criminal Justice Award. 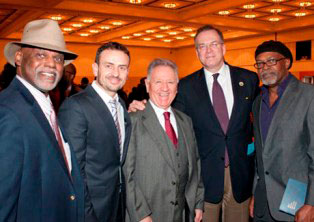 Then Chair of the Housing Authority of Portland, Lee Moore was an honored guest at The Skanner Foundation’s MLK Breakfast in 2011. From left, Lee Moore, Jorge Tarazona and Miguel Figuero of the Tarazona Corporation, Portland City Commissioner Nick Fish, and Wayne Branch Tarazona Vice President for Operations. (Photo/The Skanner Archives)As a management executive, Lee went on to serve as director of the Civil Rights Division at the Oregon State Department of Labor, where he implemented new laws against gender discrimination and more. Later he taught classes at Portland Community College on civil rights laws in the workplace.

In the private sector, Lee worked as site operations manager for Tektronix, where he helped to lay out and manage the transition from manual to automated electronic devices and developed new manufacturing facilities; organization development manager for Titanium Group and Precision Castparts, where he was hired to help change the management culture.

Lee also served as the State of Oregon Liquor Control Acting Director, tasked with obtaining better alignment between the hearings unit and the rest of the organization, serving as executive until a permanent director was hired.

He was also the first-ever deputy director of the Oregon State Lottery, where he developed and managed construction of major new headquarters, helped build a more efficient management structure, and won awards for building strong ties between the Lottery and Asian, Hispanic and Black organizations.

While at the Lottery, the governor’s office nominated Lee as a senior fellow in the American Leadership Forum. For one year, this organization of senior executives from around the state forms a cross section of business, non-profit, and government leadership, to use their collected knowledge and experience to understand significant issues affecting each other’s areas, and then offer possible solutions.

As General Manager and CEO of Clackamas River Water, Lee guided a cultural shift to reorganize the agency and tame its overreaching board of directors.

In one of his most impactful roles, Lee served on the board of directors of the Housing Authority of Portland for 12 years, including two years as chair and one year as chair emeritus. His focus was to better align the mission of the Housing Authority to the needs of the people. This put Lee on the team that developed three award-winning “Hope 6” programs, which were affordable housing projects developed with funds from the federal government. In his work on affordable housing, Lee ensured the needs of the tenants were included in the design and development of each unit.

While he was board chair in 2011, Lee was asked by Portland City Commissioner Nick Fish, now deceased, to come in and help with the history-making Williams Avenue Bicycle Project, “to calm things down,” Lee said.

As a volunteer in his youth, Lee worked at the Model Cities Program on the Law and Justice Committee, after deconstruction of the Black neighborhood along Williams and Mississippi Streets. Later he also served on the board of directors at Neighborhood House community center serving Northwest neighborhoods.

“It's the ability to make the complex simple,” he said.

“Most of the time when I went into a place that was having difficulties, my job was to go in and look at the organization to see how to make it work better. Getting people to come together and work for a common goal, to set their egos aside.”

“This guy was a pioneer,” Foster said. “And he used to tell me: ‘Bernie, follow the money.’” 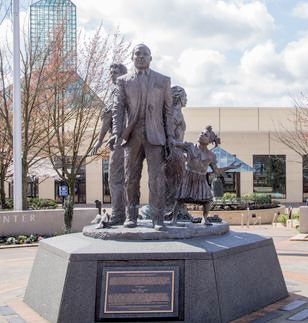 "The Dream" statue at the Oregon Convention Center was completed August 28, 1998.Foster recalled that Lee was instrumental in fundraising for the bronze statue of Dr. Martin Luther King Jr that graces the front of the Oregon Convention Center. While raising support for the statue, Lee also raised tens of thousands of dollars for local Black students and others to attend universities, Foster says.

Foster shared stories of the racism Moore faced while working in the halls of government, but detailed times when Moore chose to forgive colleagues instead of pushing for punishment.

“He was a tremendous person, and he will be sorely missed,” Foster said.