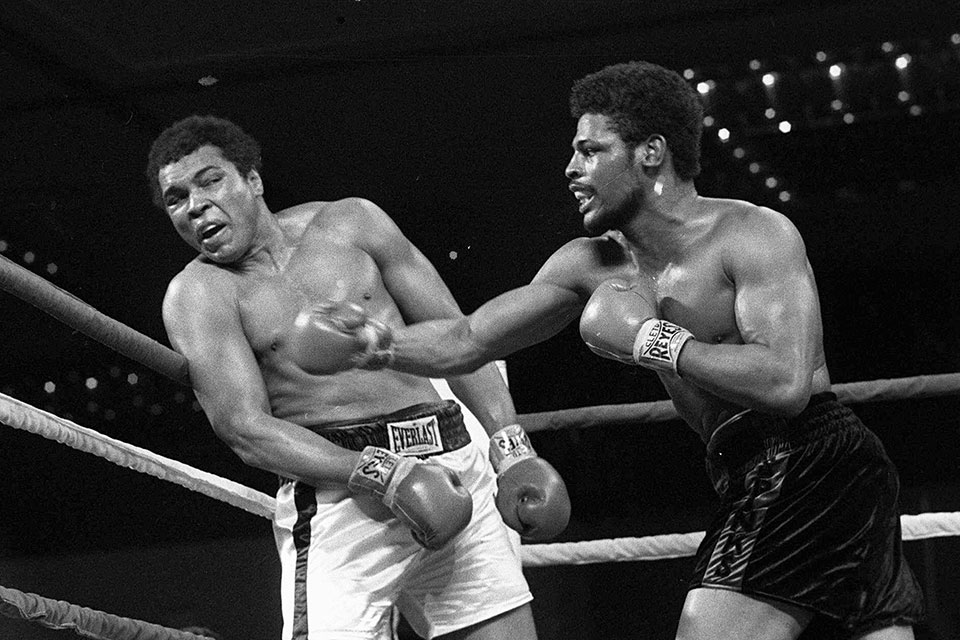 LAS VEGAS (AP) — Leon Spinks, who won Olympic gold and then shocked the boxing world by beating Muhammad Ali to win the heavyweight title in only his eighth pro fight, has died. He was 67.

Spinks, who lived his later years in Las Vegas, died Friday night, according to a release from a public relations firm. He had been battling prostate and other cancers.

His wife, Brenda Glur Spinks, and a few close friends and other family members were by his side when he passed away.

A lovable heavyweight with a drinking problem, Spinks beat Ali by decision in a 15-round fight in 1978 to win the title. He was unranked at the time, and picked as an opponent because Ali was looking for an easy fight.

He got anything but that, with an unorthodox Spinks swarming over Ali throughout the fight on his way to a stunning win by split decision. The two met seven months later at the Superdome in New Orleans, with Ali taking the decision this time before a record indoor boxing crowd of 72,000 and a national television audience estimated at 90 million people. 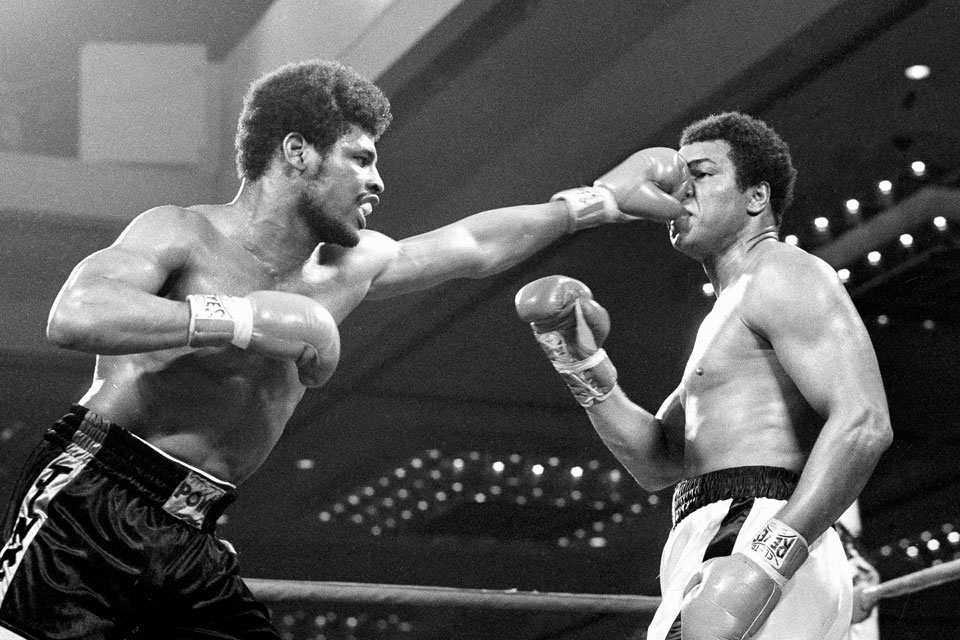 In this Feb. 15, 1978, file photo, the fist of challenger Leon Spinks flattens the nose of heavyweight champion Muhammad Ali during their title fight at Las Vegas. (AP Photo/File)“It was one of the most unbelievable things when Ali agreed to fight him because you look at the fights he had up to then and he was not only not a top contender but shouldn’t have been a contender at all,’’ promoter Bob Arum said Saturday.

"He was just an opponent but somehow he found a way to win that fight." 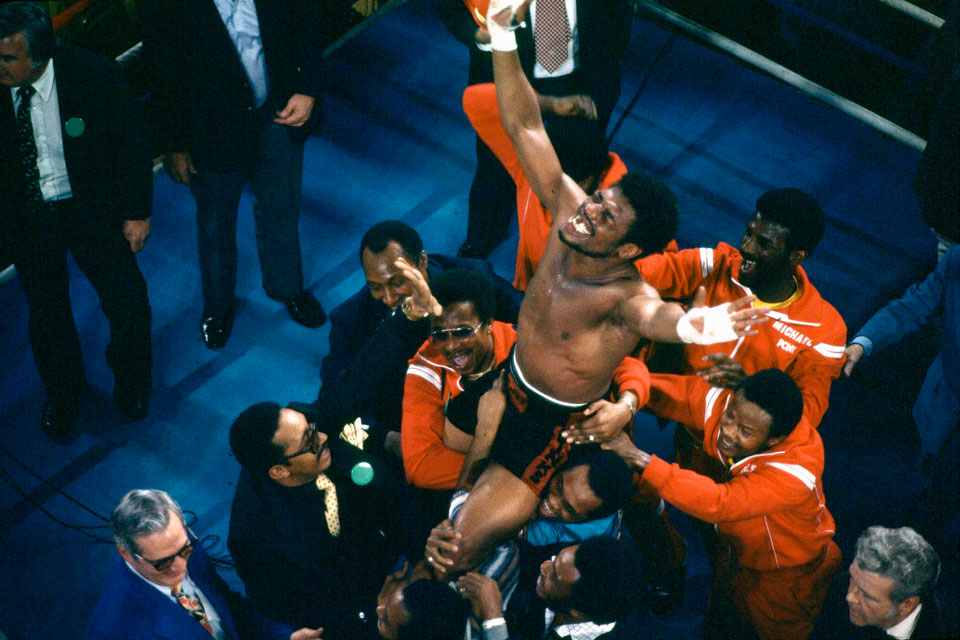 In this Feb. 15, 1978, file photo, Leon Spinks celebrates as his entourage holds him aloft after his 15-round split decision victory over world heavyweight boxing champion Muhammad Ali in Las Vegas. (AP Photo/FIle)Spinks would lose the rematch to Ali in New Orleans and fought for the title only once after that, when he was stopped in the third round in 1981 by Larry Holmes. He continued fighting on and off into the mid-1990s, finishing with a record of 26-17-3.

Spinks, with a big grin that often showed off his missing front teeth, was popular among boxing fans for both his win over Ali and his easygoing personality. But he burned through his earnings quickly, and at one point after retiring was working as a custodian at a YMCA in Nebraska, cleaning locker rooms. 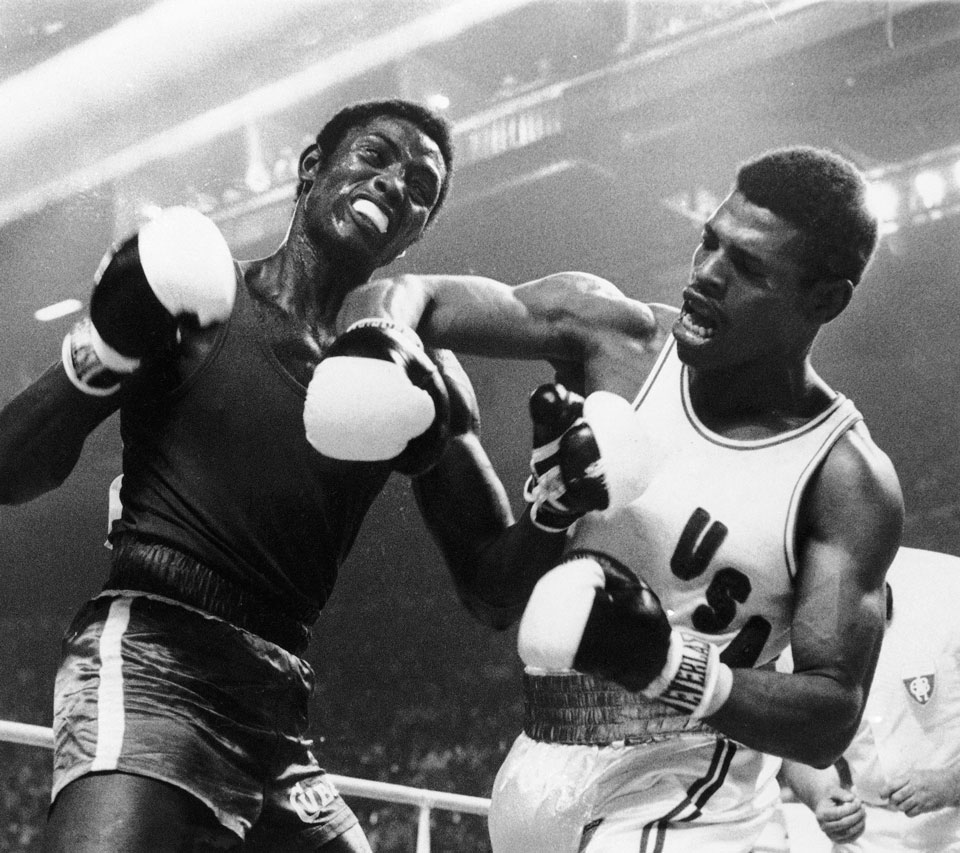 In this July 31, 1976, file photo, the United States' Leon Spinks lets a right fly at the face of Cuba's Sixto Soria during light heavyweight boxing action at the Olympics in Montreal. (AP Photo/File)He later was part of a group of ex-fighters who had their brains studied by the Cleveland Clinic Lou Ruvo Center for Brain Health in Las Vegas. Spinks was found to have brain damage caused by a combination of taking punches to the head and heavy drinking, though he functioned well enough to do autograph sessions and other events late in his life.

“He was a good soul,” said Gene Kilroy, who was Ali’s business manager when he fought Spinks and became friends with the fighter.

Spinks won the light heavyweight division at the 1976 Olympics in Montreal, beating Sixto Soria of Cuba in an upset to become one of five U.S. fighters to win gold. His brother, Michael, who would later become heavyweight champion himself, won the middleweight gold, and Sugar Ray Leonard took the welterweight title.

Spinks was hardly spectacular after turning pro, winning six of his first seven fights. Just four months before he met Ali, he could manage just a draw with journeyman Scott LeDoux and he wasn’t on anyone’s radar in the heavyweight title picture.

But Ali was coming off a brutal fight with Earnie Shavers and wasn’t looking forward to what would have been a mandatory bout against Ken Norton, whom he had already fought three times and who seemed to have Ali’s number. Instead, he sought an easy mark for a fight that was to be nationally televised on ABC, even knowing he would be stripped of one of his titles for taking another fight.

Enter Spinks, who was such a big underdog most sports books didn’t even take bets on the fight.

“In that fight everything clicked,” Arum said. “He came in with a game plan and he beat Ali. It wasn’t that Ali wasn’t at his best, but Leon shocked everybody with how good Leon was.”

Suddenly, Spinks was the heavyweight champion of the world at the age of 25.

“I'm not The Greatest,” Spinks said afterward. “Just the latest.”

Arum was in the dressing room with Ali after the fight, and said Ali directed him to sign Spinks to a quick rematch. The two fought seven months later in a prime-time fight on CBS that set television viewing records at the time, with nearly half the country tuning in.

Ali took the rematch more seriously than he did the first fight, winning a decision though Spinks was competitive. Spinks might have been better, Arum said, but enjoyed the life of being heavyweight champion too much and partied much of the time between fights.

“Leon posed in a bathtub with a glass of champagne smoking a cigar. He suddenly had an entourage as big as one that Ali had,” Arum said. “We were all staying at the same hotel in New Orleans for the rematch and one morning I was coming down to breakfast and Leon got in the elevator and collapsed on the floor. Obviously he had been out drinking and I said, `Leon, are you crazy, you’re fighting in just a few days.’ He said `What do you mean? I’m just coming in from roadwork.'”

Among the notable people in Spinks’ entourage was Lawrence Tureaud, who would later be known as the actor Mr. T and served as bodyguard for the champion.

Spinks was born July 11, 1953, in St. Louis, raised in poverty along with his brother Michael. After discovering boxing both brothers became top amateurs, culminating in the 1976 Olympics where Leon won the light heavyweight gold and Michael won the middleweight gold.

Michael Spinks would go on to win the heavyweight title himself in 1985, defending it three times before being knocked out by Mike Tyson in 91 seconds in their 1988 fight in Atlantic City. By then, the best part of Leon’s career was over, though he would fight until losing a December 1995 fight against Fred Houpe in St. Louis.

After moving to Las Vegas, Spinks was married to Brenda Glur Spinks in 2011. The two were often seen at boxing-related activities, including Spinks’ 2017 induction into the Nevada Boxing Hall of Fame.

“He was happy go lucky, the salt of the earth,” Arum said, chuckling at the memories.

“Leon was nutty but you couldn’t get angry at the guy. He never meant any harm to anyone. You couldn’t help but love him even though you shook your head at how he acted.”