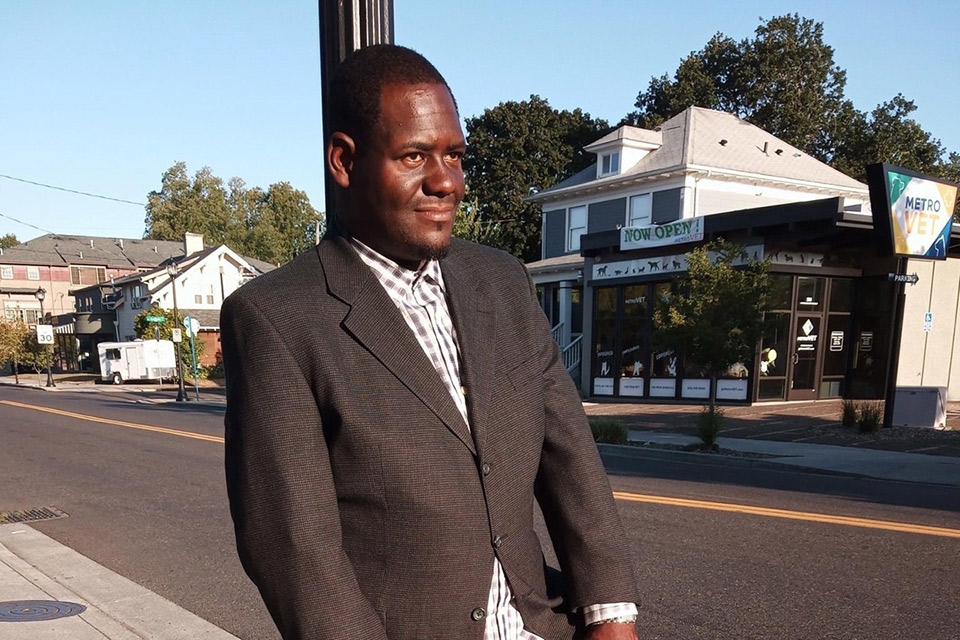 Tetteh Kofi, 35, of Portland, died the evening of Nov. 19. His death prompted the Oregon Department of Transportation to install rectangular flashing beacons at the intersection of Highway 99E and Boardman Avenue in Milwaukie, where he was killed crossing the street in the middle of a corridor where 133 pedestrian and motorist fatalities and serious injuries were recorded over a 10-year period.

But his family wants the young musician with a strong faith to be remembered for much more than his untimely passing.

“There’s three things Tetteh loved: He loved going to church, he loved being with people, and he loved to eat,” his mother Patricia Kofi told The Skanner.

“The way he came in was fast, the way he left was just as fast,” she said, explaining that when he was born on Jan. 2, 1985,  he came into the world quickly due to induced labor. “When he came he did not cry.

Kofi grew up in what is now recognized as the Alberta Arts District, attending the now-closed Philadelphia Missionary Baptist Church. It was there that he found his calling.

“When he was three or four we played church in the house, because we’re church people,” Patricia said. “And so my daughter and my son and I, we were the choir, and Tetteh was our preacher. And so he would get up and he would say, ‘Now the choir will sing.’ He’d preach. I said, ‘Let’s not speak in tongues, that’s something that’s a gift from God, let’s not be playing with that.’ But he’d do the offering -- we’d get out our Monopoly money and our baskets.

“This is what Tetteh knew. In Sunday school he couldn’t sing the words, but he could sing the melody of the song....And when he was little, he didn’t want to wear sweaters and slacks. He wanted to dress up in suits, like the pastor and the deacon. He loved to dress up.”

Prior to his death, Kofi suffered from heart problems and even a minor stroke. Not even hospitalization could keep him away from the pews for long, Patricia said.

“He came out of the hospital one time, and one of the ladies that knew him, she said what touched her about him was he came straight out the hospital to the church in shoes the hospital had given him, so he could be at the church.”

Young Kofi began his music career in a less-than-auspicious way: Breaking the piano keyboard his sister had warned him to stay away from. Undeterred, he kept at it and his family enrolled him in music programs both in school and extracurricular. Early on he was so shy and scared of the prospect of performing in front of a crowd that he’d sometimes bring his brother, Asare, with him.

“When he played, it touched people,” Patricia said.

“It moved people. He played for his school choir at Carnegie Hall, and then when he got a little bit older, he started playing for different churches. He had a mind for loving people, caring for people.” 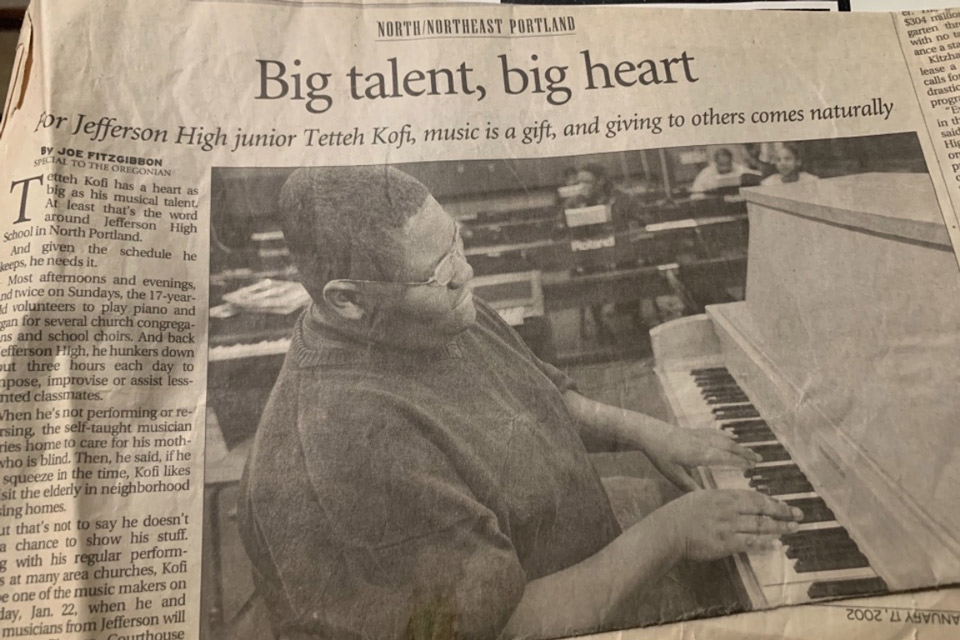 Although born with a developmental disability, Tetteh Kofi excelled as a musician and graduated from Jefferson High School. (image courtesy of the family)Kofi was born with trisomy, the condition of having an extra copy of chromosome 21. It caused him developmental delays, his mother said.

“He had mental challenges, but in his head he said he wasn’t going to be riding in no short yellow bus,” Patricia said, referring to derogatory cultural shorthand for students who are bused to alternative schools that offer special education programs -- and the stigma of being labeled “other” because of it. “He was determined to override this.”

As a middle school student struggling with the curriculum, Kofi often ditch class but not school, escaping to the music room on campus. As a teenager, he’d sometimes sneak out of the house to attend church -- a habit for which his now-92-year-old grandfather, John Calhoun, often teased him.

“He did not do music reading until high school; he was playing strictly by ear,” Patricia said. “His high school music teacher asked me, ‘Where did that boy come from?

"He’s such an old spirit. He’s an old man beyond his years.’”

As a young man blending his faith with his passion for music, Kofi was given to reviving old church and gospel standards, reviving them for modern audiences.

“Music was just tuned into him,” Patricia recalled. “That was his gift. He used to say ‘I wish I could take the piano with me.’ It not only was a gift, it comforted him too.”

Throughout Kofi’s life, the church -- whether in Oregon, Texas, or North Carolina -- was a place where he could express himself creatively.

“You usually get ordained by a bishop or somebody,” Patricia said. “Tetteh was ordained by God himself.”

In 2018, he founded Perpetual Worship Center Prophetic Ministries in North Carolina. Back in Oregon, he was drawn to street ministry.

“People in this town know him,” Patricia said.

“They called him the ambassador to the homeless.”

At the time of his death, Kofi had been transitioning out of homelessness himself. But as he told his mother, the experience wasn’t a negative one.

“He was living with the homeless people” in Clackamas County, she said. “I asked him why. He said, ‘Because there’s peace out here. I like peace.’ He said to me, ‘How can you help people if you don’t know what they’re going through? If you haven’t experienced what they’ve gone through?’ Even though he was homeless, he was passing out tracks, passing out food, blankets, socks, all that stuff.”

Kofi’s 36th birthday would have been Jan. 2. He had hoped to hold a concert and large gathering, and when conditions allow, his family would like to organize a similar event in celebration of his life.

“Wherever there was music, there was Tetteh,” Patricia said. “He got around so much, he was speedy, speedy, speedy -- some of that was he had (attention deficit disorder). He couldn’t sit still. But wherever he went, people knew him. They knew this young man that could play the music and could sing.”

Tetteh Kofi is survived by his mother, his father Godwin Kofi, two sisters, a brother, and his grandfather.