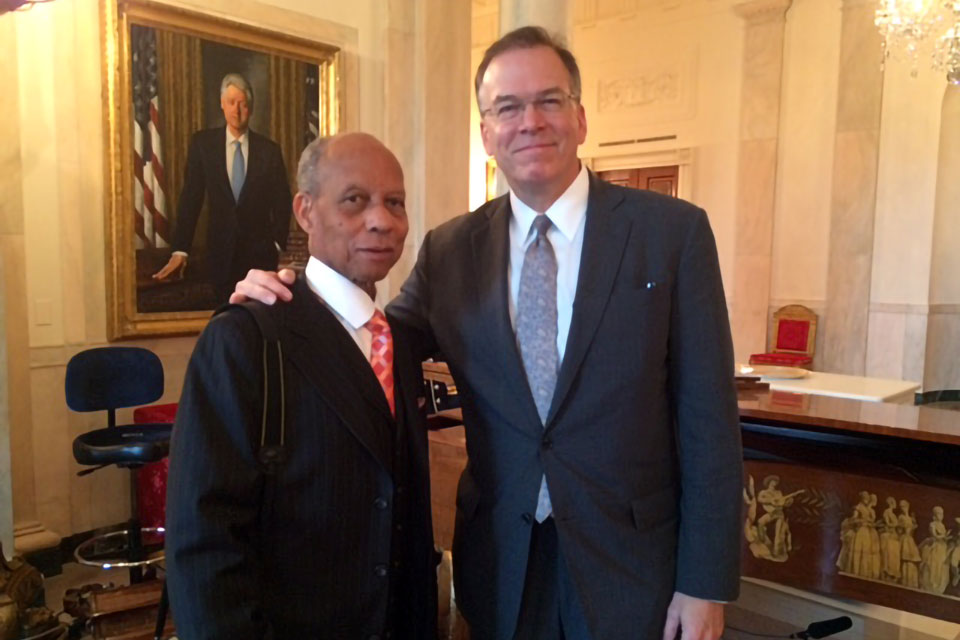 Nick Fish, 61, died Thursday in his home surrounded by his loved ones, according to a statement released by Sonia Schmanski, his chief of staff. Fish announced Tuesday he planned to resign this year to focus on his health while battling abdominal cancer, which he was diagnosed with in 2017.

“I was fortunate to be in Washington, D.C. with Nick when President Obama awarded the medal of honor to Henry Johnson and another Black soldier,” said Foster. “When Helen Silvas broke the story at The Skanner, Nick ran with it. He was really the catalyst that got the U.S. Congressmen in D.C. to support the research for Henry Johnson and Army Sergeant William Shemin. I learned that Nick’s grandfather led those Black troops, the Harlem Hellfighters, Johnson’s regiment, into battle.”

“We were very fortunate to have Nick. I will really miss him,” continued Foster.

“On a personal note, he had cancer a few years after I did and we would talk about that from time to time. The city will truly miss him," Foster said. "He really blew things up down there at the council, I think. He did a tremendous job and will be truly missed.”

Fish was the current longest tenured member of the Portland City Council, first elected and took office in 2008. He was last re-elected in 2018 and his current term was to expire at the end of 2022. Fish’s office oversees the Bureau of Environmental Services and Portland Parks & Recreation.

Fish has also previously been the commissioner in charge of the Portland Fire Bureau and Water Bureau, and helped create the Portland Housing Bureau in 2009.

Author and former The Skanner News Editor Lisa Loving wrote in a social media post, “I first interviewed Nick Fish for The Skanner News when he was elected. When I attended City Council meetings as a reporter he would step down from the dais and chat with me before the meetings.” She added, “Nick was proud to follow the legacy of his father, who was a controversial and powerful member of Congress for many years.

"We didn't always agree on things, but I loved Commish Fish because he returned my phone calls and until his illness, was willing to sit there and take the heat.”

Portland Mayor Ted Wheeler said in a statement, “Nick was a dear friend and a trusted public servant. He fiercely advocated for all Portlanders and always led with compassion, wit and intelligence. He was instrumental in shaping Portland for the better and I often sought his advice and guidance. We are especially thinking about his family and his team – as we continue to grieve his passing. Nick was taken too early. He will be dearly missed.”

Oregon Attorney General Ellen F. Rosenblum said in her tribute to Nick Fish, “I just feel sad today — incredibly sad — at the loss of our good friend, “Commish” Nick Fish. In his poignant “resignation” letter three days ago, Nick said, “The future is bright.” I’m sure he believed that. But today our skies are cloudy, suffused with a terribly empty feeling in the hearts of everyone who knew and loved him — and of the thousands of Portlanders who benefited from his deep commitment to them.

"We all grieve that such a bright light of our community has been extinguished so prematurely.”

“Nick was one of the kindest and most authentic people I’ve known, U.S. Congresswoman Suzanne Bonamici said in a statement. “Although he came from a long line of prominent New York politicians, Nick was truly humble. He worked hard and was passionate about our community, especially on issues of housing and homelessness, the environment, and parks.”

Metro will hold a special “Free Parking Day” on Saturday, Jan. 11 in honor of Nick Fish.

“It's hard to overstate the legacy Nick Fish leaves on the Portland region. He was a leader, he was thoughtful, he was indefatigable,” said Metro Council President Lynn Peterson. “He advocated passionately for our regional parks system because he understood the value of connecting people to nature. Even as he was undergoing cancer treatment, he worked tirelessly to support the regional affordable housing measure in 2018. He was a mentor and a friend. His legacy touches the lives of thousands of Oregonians every day, and will continue to make the Portland region a better place for decades to come.”

A Celebration of Life will take place on Saturday, February 8, 2020, at 3 p.m. in Hoffman Hall on the Portland State University (PSU) campus.