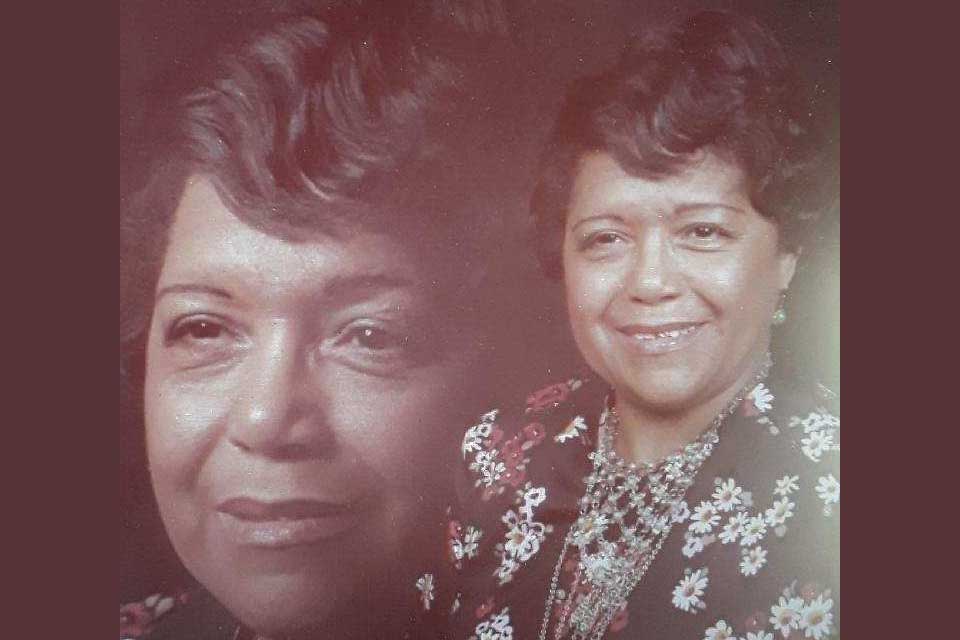 “A TIME TO BE BORN” …. On June 14, 1923, in Wagoner County, Oklahoma, God gave Monroe and Minerva Palmer a beautiful baby girl. They named her Ella Mae Palmer (from birth she was most often affectionately called Ella).  She was the youngest of 14 children.  Her parents, and her 13 siblings, preceded her in death.

“A TIME TO PLANT” …. Ella attended Arkansas Valley Grade School and graduated from Carter G. Woodson High School in Tullahassee, Oklahoma. She joined church and accepted Christ in her life at a very young age, even as a child she was excited about attending Sunday School and Church at Pinkard Chapel C.M.E. Church, Tullahassee, OK.

“A TIME TO LOVE” …. In 1939 Ella married the love of her life, Q.T. Gay, who preceded her in death on June 18, 1959 and to this union 12 children were born. Two sons, LaFarrest and Shepherd, preceded her in death. Mom would always tell her children, losing her husband was the most devastating thing that ever happened to her, because she had no idea how she be able to care for her then-11 children, ranging from the ages of six weeks to 18 years, but with the help of God, friends and family she battled through her grief and did what was necessary to take care of her children. Ella made sure without fail that she and all her children where at the church at least 30 minutes prior to Sunday School, so much so that she received a key to open the church doors. While at Pinkard Chapel, Ella was Sunday School Teacher, Choir Director (which consisted of all her children and other neighborhood children she could round up). The choir became so well known and popular throughout the community and surrounding towns she had to turn down invitations. She was also a member of the Farm Women’s Club, who visited the sick and shut-in and assisted them with various needs.

“A TIME TO PLANT” …. In 1964, Ella made a trip to Portland to attend her oldest son’s wedding. She fell in love with Portland and after many obstacles and delays, on March 17, 1965, she and six children boarded a train for Portland, Oregon, making it home. Ultimately, all her children joined her in Portland except for one. Immediately upon her arrival to Portland, she sought a church home, which was Allen Temple C.M.E. Church, under the pastoral ship of Reverend George E. Carter, whom she learned was also from Oklahoma. Ella didn’t waste any time getting busy in her new church home alone with her children. (House rule number 1, if you were going to live in Ella’s house, church was mandatory, no matter your size or age.) Ella became a member of the Allen Temple Steward Board #3, Children and Adult Sunday School Teacher, Choir member, Missionary Society -- and was always willing to help in all areas of the church. Ella never said “no” when it came to the church.

Upon moving to Portland, Ella took a job as a Child Care Specialist at Melinda Bradwell’s Day Care, where they developed a mother daughter bond as Mother and Daughter as well as Grandmother to Ella’s children. That bond remains in the Bradwell/Gay family to this day.

Ella soon took a job at Owens Illinois Glass Plant, Portland, Oregon, as well as an evening part-time job. Her number one priority was to make sure her children’s needs were met.  She later became employed with the Model Cities Demonstration Project, where she was an advocate for equal employment for all who needed and wanted employment. She was actively involved in the war on poverty program, because her desire was to help people no matter what their needs were. She was a member of the Model Cities Planning Board, Martin Luther King Scholarship Fund and the Youth Care Center Board, and several smaller program under the Model Cities Pilot Program.

While working at Western Electric, Ella managed to attend night school at Portland Community College, where she earned an AAS degree. Her goal was to earn a bachelor’s degree, but as she so eloquently put it, “The demands of family life, a full-time job, and a community to care for, forced her to abandon her plans for the time being. She stated she had mouths to feed and my family is my first responsibility”.

In the middle to late 1970s Ella became employed by the Oregon Department of Human Services as a Case Manager. While there Ella was still active with the Model Cities Projects, she was named Citizen of the month by the Model Cities Program because of her commitment and dedication to the cause. In 1971 Ella ran for and was elected to the Model Cities Neighborhood Schools Planning Board for the Martin Luther King School. While working a beyond capacity case load as a Case Manager, Ella, became involved in the Group Foster Home Board, the 4-C Parent Advisory Board, the Kaiser Hospital Partnership Council, the Green Fingers Project, the Albina Community Action Center, The Albina Childcare Center, as well as became a Certified Foster Parent. Ella was always concerned about the wellbeing of not only her children, but other children as well. No matter where she lived in Portland, her house was always the gathering place for the neighborhood, especially the children and her named soon changed from Miss Ella to “Momma Gay.” Somehow there was always enough food, with leftovers to spare.

“A TIME TO HEAL” ….  After several bouts of illnesses, Ella retired from the State of Oregon in the early 1980s but she never slowed down. She was still active in the church and the community. She took in numerous foster children, some of whom did not leave until they became grown and are still part of the family today. Once Ella had beaten both breast cancer and colon cancer she bounced back like a ball and hit the ground running. She became a full-time Foster Parent. Her door was open to all races.  Ella did not believe in color barriers when it came to children. Her motto was “No child goes hungry or homeless as long as I'm around. There is always room for one more.”

“A TIME TO GAIN AND A TIME TO BUILD UP” …. In 1990 Ella adopted three of her great-grandchildren ranging from the ages of birth to one year. So at the age of 70-plus she became active in the community and the education system all over again. In 1997 she was a very vocal mouthpiece in the Humbolt Elementary School as the test scores were low and it appeared the parents where being kept in the dark about plans of action regarding their children. In a news article written by the Portland Public School Superintendent, it was said that Miss Ella said to the Superintendent, “How do you plan to make the parents more accountable?”  The Superintendent’s response was “by getting the parents more involved.”  Ella’s response was, “If I get anymore involved, I’ll have to move my bed up to the school.” Because Ella wanted to keep her great-grandchildren focus, grounded and rooted, she and the children became involved with various community after school programs: SE, Steppers Track Life Change Christian Program, Big Brother, Big Sister mentoring program, Trailblazers Boys and Girls club, NYSP (National Youth Sports Summer Program), Church Crusaders for Christ Step Team, and of course she made sure they were active in Sunday School, Youth Choir, Vacation Bible School, and Girl Scout and Boy Scout.

“A TIME TO LAUGH” ….  Ella loved to sew at one point she sewed for her family as well as others, she loved gardening and for many years had the best garden in the neighborhood and it was large enough to feed the neighborhood. She loved family picnics and cook outs, barbecuing, cooking, making sweet potatoes pies from scratch. Her pies and barbeque became so famous she took orders and had a side job selling barbeque dinners with sweet potato pie as desert.  She sometimes had orders for whole pies.  Ella loved entertaining: she had the gift to gab and she loved making people happy. She also enjoyed providing transportation for the elderly, the handicapped and others in need. She loved transporting them to doctors’ appointments, the grocery store, banking, church, etc. Ella never demanded compensation for helping others; most often, when it was offered she would turn it down. Her reward was seeing others happy. Ella was also a past Matron of Ada Chapter #6 of the Eastern Star, Portland, Oregon. She is also past President of the Oregon Chapter of the Oklahoma Club and was on several neighborhood watch committees.

“A TIME TO LAUGH AND DANCE” …. Ella was well known for speaking very candidly and without subtlety. She was always direct and to the point -- no beating around the bush for her. But she was also known for being very fair -- no one was off limits. She was very, very, observant and could read your character like a well-written book. She knew more about you than you knew about yourself. Nothing got passed her. She was known for “catchy” phrases, especially one liners. Some of her favorite sayings were: “I’m too old of a cat to be fooled by a Kitten”;  “What goes on in the dark will come to light”;  “A hard head totes a soft behind”; “You can’t teach an old dog new tricks.” Ella was a strong woman of faith, but her strength in the Lord was even stronger. She was diagnosed with Alzheimer’s at age 75, but she was determined that she was going to control it, it would not control her. Ella’s health began to decline around the age of 88 and this is when her children knew that they would have to care for her.  Our motto was, “She took care of us all these years, now it’s time we take care of her,” and that we did.

“To everything there is a season, a time for every purpose under the Heaven.  A time to say farewell”…. Early Tuesday morning, Sept. 4, 2018 the Lord spoke to Ella and said, “Well done, my good and faithful servant, it’s time for you to take your rest now.” She closed her eyes received her wings and moved to her new permanent address, HEAVEN.