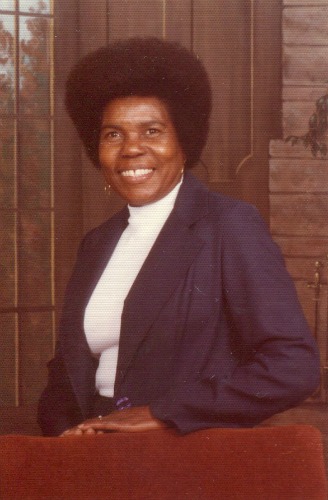 Georgia J. Lewis Nelson, beloved mother, grandmother and great-grandmother was born May 10,1927 in Idabel, Oklahoma.  She departed this life on October 10, 2016.  Georgia had strong and abiding faith, characterized by her love for God, devotion to her family, her strong will, unparalleled integrity, loyalty to her friends, and love for all. She was a member of First A.M.E Church.

Her spirit can be best described as an embodiment of the Fruits of God's Spirit: love, peace, patience, kindness, goodness, faithfulness, gentleness and self-control. Everyone who encountered Georgia was greeted with a hug and treated as if she'd known them for a lifetime.

At the age of four, after the death of her mother, Georgia moved to Fresno, California to live with her older sister, Bertha Green, who raised her.  In 1949, she married the love of her life, John W. Nelson, who preceded her in death. They were married for 45 years. To this union eight children were born, one of whom, Gary Nelson, preceded her  in death. Georgia was an exceptional matriarch and example for her children, grandchildren and great-grandchildren.

Georgia enjoyed spending time with family, gardening, putting together puzzles, an occasional visit to the casino, fishing with her sons and watching football.  Georgia was known for telling long, detailed stories about her life that tended to change each time she told them. Among the most popular was the story of how she coaxed a friend into “rescuing” a duck from a circus show that she and her friends attended.  Georgia named the duck, Buster, and raised him as her pet.

Georgia's steadfast and positive spirit, her beautiful smile and sense of humor will be deeply missed by all who knew and loved her.