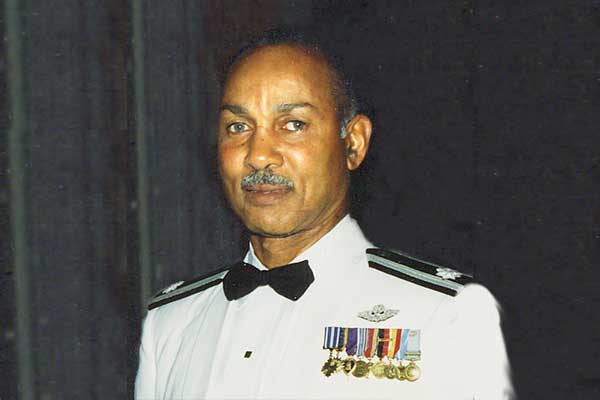 Drummond was a member of the last official class of the Tuskegee Program that trained African American pilots for combat duty in the U. S. Army Air Corps during World War II. Photo courtesy army.mil.

Lt. Colonel Edward P. Drummond, Jr., (USAF Retired) of Lakewood, Wash., died in Seattle on Sunday, Aug. 3, 2014, after a long illness. He was the last surviving member of the Tuskegee Airmen that was a member of the Sam Bruce Chapter of Tuskegee Airmen, Inc., based in Seattle. As a member of Class 46-C, Lt. Col. Drummond was a graduate of the last class of African American pilots trained at Tuskegee Army Air Field, Ala., during World War II to assist in prosecution of the war effort against the Axis.

A Memorial Service is scheduled for Thursday, Aug. 28, 2014, 2 p.m., at Mountain View Memorial Park at 4100 Steilacoom Boulevard SW, Lakewood. Proceedings are set for the Aspen Chapel, located within the Celebration of Life Center. Upon entering the Mountain View Memorial Park grounds, simply follow the blue center line to get to the chapel. A reception will follow immediately in the Willow Room at the same facility. Members of the public are invited.
Edward Powell Drummond, Jr, was born on Aug. 28, 1926, in Philadelphia, Penn. The early part of his life was spent on the Eastern Shore of Maryland where he attended schools in the Pocomoke City area, and was class valedictorian at Stephen Long Elementary School in 1939. Known as “Pal” to his family and childhood friends, he attended Salzburger Junior High in Philadelphia, and graduated from West Philadelphia High School in June 1944. His academic studies at Howard University in Washington, D.C. were interrupted by World War II and the call to serve his country.

Lt. Col. Drummond was drafted into the United States Army and was ultimately accepted into the Aviation Cadet Training Program at Tuskegee, Ala. He was a member of the last official class of the Tuskegee Program that trained African American pilots for combat duty in the U. S. Army Air Corps during World War II.

Lt. Col. Drummond served in the Military for 25 years, and was honorably discharged in 1970. He worked twelve years for the State of Washington in the Social and Health Services Department and the Department of Licensing. He retired a second time in 1982.

The military career of Lt. Col. Drummond included tours of duty in Japan, Korea, England, France, Viet Nam and Germany as well as duty assignments in Ohio and Washington State. During his career as a pilot, he flew the B-25, P-47, F-80, F-84, F-86D, and F-106. Lt. Col. Drummond was one of the first two African American pilots to fly jets into combat during the Korean War where he completed 104 missions.

Lt. Col. Drummond was assigned to McChord Air Force Base twice during his career. He first joined the 325th Fighter Wing, Air Defense Command in January 1961 as Operations and Plans Officer. He was further assigned in 1962 as Operations Officer to the 318th All Weather Fighter Squadron, 325th Fighter Wing. After serving a year in Viet Nam from June 1963 to June 1964, he returned to McChord as a Plans Officer in the 25th Air Division in June 1964. His final duty station was as Plans Officer at Headquarters United States-European Command in Stuttgart, Germany from 1967 to 1970.

Lt. Col. Drummond was among the Tuskegee Airmen honored with the Congressional Gold Medal in Washington, D. C. on March 29, 2007, and attended the official ceremony in the Capitol with his wife, Alberta. He also received an honorary doctorate degree from Tuskegee Institute in Alabama.

Despite battling chronic illness for many years, Lt. Col. Drummond remained active in the Sam Bruce Chapter, devoting many hours to communities across the Northwest to raise awareness of the contributions of the Tuskegee Airmen to beat back racism and discrimination in the United States. He often spoke at area schools, service clubs, and various venues for retired and active duty military personnel. He was a frequent participant at special events and panel discussions at the Museum of Flight in Seattle and Boeing; and when his health permitted, a regular participant in the Living History Day Program for the State of Oregon, an effort he always considered vital to keeping the real meaning of Veterans’ Day alive amongst the youth of the country. He was one of four Tuskegee Airmen honored in March 2012 with an invitation to meet with members of the Washington State Legislature, and used the opportunity to urge legislators to work cooperatively with each other regardless of party affiliation.

Tuskegee Airmen, Inc. is a 501 (C) (3) organization. All contributions are tax deductible.