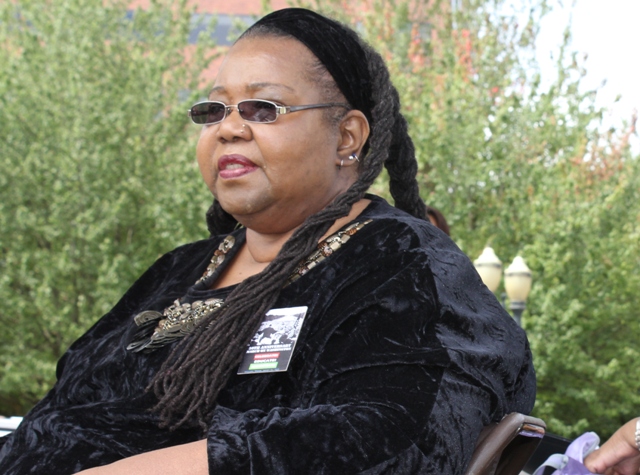 One of the most respected and admired artists in the Pacific Northwest, musician and songwriter Janice Marie Scroggins died Tuesday in Portland.

A master pianist of many disciplines, Scroggins wowed audiences with everything from Scott Joplin and Ray Charles to the Ten Grands tours and more. She was known for jazz, blues, gospel, funk, and popular music – but also performed and recorded folk and country tunes.

“I come from a musical family, raised with Gospel, Classical, Movie Themes, Blues, etc.,” Scroggins wrote on the CD cover for Theresa Demarest’s recording, “Good Company.” “I've had the good fortune of playing any type of music I want to with great artists.”

A mentor and support to people of all racial and economic backgrounds, Scroggins could be heard in concert halls and retirement homes, jazz and blues stages as well as churches. Since the late 1970s when she moved to the Pacific Northwest, whenever there was a musical tribute to be made or a benefit to be launched, she was there.

There were hundreds of social media tributes to Scroggins online Wednesday morning, including many by jazz and blues musicians who posted images of her as their profile picture.

“Janice’s spirit is embedded in my Soul,” guitarist Norman “Boogie Cat” Sylvester wrote. “Janice was and always will be a part of the energy in my music, because she gave my music and career an explosive boost for 30 years. Janice’s musical force and spiritual presence will be missed in the Portland Music Community.”

Fellow pianist Tom Grant said, “Janice's quiet depth...in her piano playing and in the conduct of her life...will forever be an inspiration to all of us who knew and worked with her.”

Poet Emmett Wheatfall, whose jazz/spoken word recording “Them Poetry Blues” is receiving airplay around the nation, linked his collaboration with Scroggins on Spotify, called, “Janice Scroggins and Her 88 Keys.” On his Facebook page, he wrote, “Portland suffers the loss of a gift from God.”

Born in 1955 in Idabel, Okla., Scroggins learned piano from her mother and grandmother as a toddler, and started performing at the age of three. She moved to Oakland, Calif., as a teen, attending high school and community college there before moving with her daughter, Arietta Ward, to Portland in 1979.

A Grammy nominee for her 1987 recording “Janice Scroggins Plays Scott Joplin,” the artist was inducted to the Cascade Blues Association Hall of Fame in 1992, and the Oregon Music Hall of Fame last year.

Her professionalism and experience, coupled with her unique style, made Scroggins a go-to session musician regionally – she could literally jam with anyone, from Obo Addy to Akbar DePriest and the all-female blues reviews she graced for decades.

She is widely remembered for her jazz duos with Reggie Houston; her gospel, blues and jazz music performances with Linda Hornbuckle; her session recordings with Harris and DePriest; and her performances with Ten Grands, the annual benefit series created by Michael Allen Harrison to raise funds for music education.

She was survived by: her children: Arietta Ward, Nafisaria Scroggins; Thomas and Francis Scroggins-Ocansey; her grandchildren: Jamani Ward-Lewis, Godyss Love, and Phoenix Smith; and her brother, George C. Scroggins.