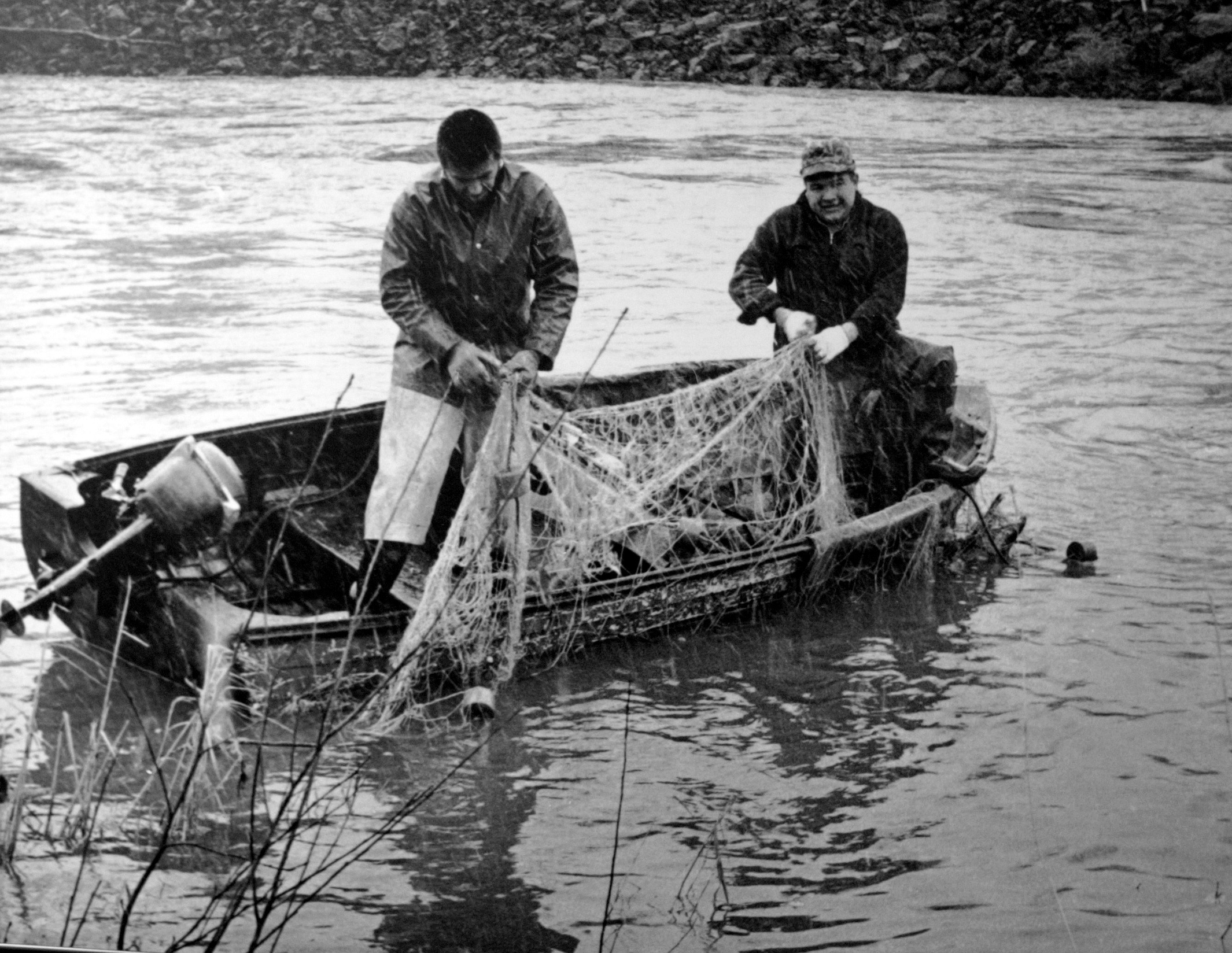 In this file photo from the late 1960s provided by the Northwest Indian Fisheries Commission, Billy Frank Jr., left, fishes on the NisquallyRiver near Olympia, Wash., with his half brother Don McCloud. Frank, a Nisqually tribal elder who was arrested dozens of times while trying to assert his native fishing rights during the Fish Wars of the 1960s and '70s, died Monday, May 5, 2014. He was 83. (AP Photo/Courtesy Northwest Indian Fisheries Commission, File)

SEATTLE (AP) — From the time he was first arrested, at the age of 14, for fishing near his home, Billy Frank Jr. had been a fierce and tireless champion for salmon, tribal sovereignty and the right of Northwest tribes to fish in their traditional waters.

Nearly 70 years of advocacy ended on Monday when the Nisqually tribal elder died at his home near Olympia. He was 83.

Frank figured prominently in Northwest fish-in demonstrations of the 1960s and 1970s that eventually led to sweeping changes in how salmon and other fish are managed in Washington state.

He was arrested more than 50 times for "illegal fishing" during the protests that came to be known as the fish wars. Patterned after the sit-ins of the civil rights movement, the campaign was part of larger nationwide movement in the 1960s for American Indian rights.

"Today, thanks to his courage and determined effort, our resources are better protected, and more tribes are able to enjoy the rights preserved for them more than a century ago," President Barack Obama said in a statement. "Billy never stopped fighting to make sure future generations would be able to enjoy the outdoors as he did, and his passion on the issue of climate change should serve as an inspiration to us all."

"Billy was a champion of tribal rights, of the salmon and the environment," the governor said. "He did that even when it meant putting himself in physical danger or facing jail."

Frank's Landing, his family's home along the NisquallyRiver, became a focal point for fish-ins. Frank and others continued to put their fishing nets in the river in defiance of state fishing regulations, even as game wardens watched and cameras rolled.

Demonstrations staged across the Northwest attracted national attention, and the fishing-rights cause was taken up by celebrities such as the actor Marlon Brando, who was arrested with others in 1964 for illegal fishing from an Indian canoe on the nearby PuyallupRiver.

Salmon was central to his culture, as with most Northwest tribes, and Frank devoted decades of his life to ensuring that fish, water and the tribal way of life were protected, said Washington state Sen. John McCoy, who is a member of the Tulalip tribe.

"It all revolved around fishing and the ability to fish," McCoy said. "He found it extremely important that this tradition be maintained."

Frank was also known for his warmth and for giving out big hugs or gently ribbing people.

In 1992, he was awarded the Albert Schweitzer Prize for Humanitarianism, whose winners include former President Jimmy Carter and Desmond Tutu.

Frank served as the chairman of the Northwest Indian Fisheries Commission since 1977. The organization of 20 Western Washington tribes was created in 1974, after the court case brought by the federal government against the state of Washington.

U.S. District Judge George Boldt, who decided the case in what came to be known as the "Boldt decision," affirmed the tribes' right to half of the fish harvest — and the nation's obligation to honor the old treaties.

The ruling, upheld by the U.S. Supreme Court in 1979, effectively made the Northwest tribes co-managers of the resource and laid the foundation for the Northwest Indian Fisheries Commission.

The decision had a sweeping effect on other tribes in the U.S., Canada and elsewhere as it triggered other treaty rights cases and changed attitudes toward American Indians, said Richard Whitney, who was appointed a technical fisheries adviser by Boldt after the decision.

Over the next 40 years, Frank continued to press for tribal fishing rights and protection of natural resources, including improving water quality, restoring habitat and removing culverts to ease fish passage.

Frank was well-known in Washington, D.C., visiting the Capitol and White House to bring attention to issues important to the tribe as well as pressuring the federal government to uphold its treaty obligations to the tribes.

"He was just as fierce now as he was then. He didn't take any crap from anybody," said Russell Hepfer, vice chairman of the Lower Elwha Klallam tribe. But Frank was also the first to give praise and support, he said.

Only weeks ago, he and other tribal members met with federal environmental regulators to push for more stringent water quality standards to reduce the amount of pollution that accumulates in fish. The standards would especially protect native people who eat large amounts of salmon and other fish from Washington state waters.

"He's been so inspiring to all the tribes," Hayes said. "He believed in the work that he was doing."