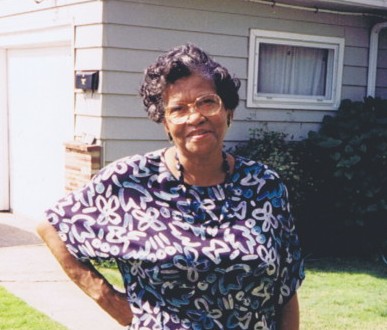 Willie Vera  Frierson was born Oct. 1, 1925 in Coushatta, La.,  to the late Rev. Martin Frierson and Ella Frierson.  She was the youngest of six children.

In Louisiana she completed her elementary education and then graduated from Springville High School.

After graduating she came to Portland, Oregon in June of 1943 for a visit and returned the following year to live and became employed at the Shipyards.

In 1947 she married Otis Smith and from this union two daughters were born, Brenda and Wanda.

In 1959 she married Leonard Ranson and from this union was twin son's Donald and Ronald and one girl Angela.

For a while she worked at a dry cleaner's  and learned all there is to know about that trade.  Her expertise inspired her so much that from 1966 – 1987 she owned and operated her own cleaners called the "Woodlawn Dry Cleaners" in the Woodlawn Community.

Willie was a member of The Eastern Star Lodge, Rose Of Sharon, Oregon Association of Colored Women's Clubs, National Council of Women.  Board Member of the Woodlawn Neighborhood Association, Volunteer at the New Hope Food Bank and a Foster Grandparents  for The Peninsula Children's Center.

She accepted Jesus Christ as her savior at an early age.  A proud member who loved working in the church and being that dedicated servant.

She worked in the Mission Department, Youth Department, a Deaconess, Pastor's Aid and on the Mother's Board.  You could always look forward to her making cookies for the Vacation Bible School.

When she was sick and shut in her Pastor and church members came to her home to worship with her.

In addition to all the things she had accomplished in life she was a proud member of a Bowling League.

Preceding her in death are her parents; siblings: Manuel, Martin Jr., Erie, Myrtis and Ola Mae; one daughter: Angela.