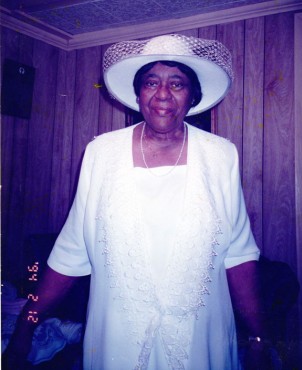 Mattie Melton Joiner was born on July 4, 1920, in Abbeville, La., and died on May 9, 2013. She was the daughter of Eva Brown and John Melton. After the death of her father in 1925, she, her mother and brother, Roland, who died in 1945 aboard ship in the Pacific while serving in the Army, went to live with their maternal grandparents, Camilla and Adam Brown on Graceland Street. Her half-brother, Morris Allen Dore, Sr., was already living with his grandparents. Her mother died in 1973. Mattie married Raphael Joiner in 1946, and a few years later they adopted Melvin Belts, their only child, who died in 2011. Raphael died of a stroke in 1965.

Mattie was a strong Christian, who read her Bible every day and faithfully attended services at Faith Hope Christian Fellowship Baptist Church every Sunday until she was no longer able to do so. She worked tirelessly raising money to build the church, giving generously of her own means, as well. She freely  gave of her time, participating in church dinner sales and events by preparing and serving food.  When she was unable to go to church, she continued to prepare food.

She was known as the "pie lady," who made hand pies—sweet potato, cocoanut and apple-- loved by everyone. She delighted in making those pies, which flew out the door warm from the oven.  People came from out of town to purchase them. Mattie baked with joy, generosity and love.

She enjoyed traveling to Seattle, Wash. and Portland, Oregon, where she visited her nieces and nephew. Two highlights of her travels were going to see Lena Horne perform in Seattle, and visiting the Oregon Coast and the monument where the Lewis and Clark Trail ended.

Mattie is survived by: her grandson, Quinton Henderson; nephew Adam Dore, Sr. (Terry); nieces Jacqueline Merriwether (Clyde), Kenmore Wash.; Patricia Dore, Seattle; and Bobbie Dore Foster (Bernard), Portland, Ore., and great-grandchildren. She was predeceased by three half-siblings from her father's first marriage and nephews, Louis Dore, Seattle; and Morris Dore, Jr. (Elsie), Abbeville.  She is also mourned by her caregivers, Adam and Terry Dore, Adam Dore Landry, and Contessa Dore Falgout of Gueydan, La., as well as staff and friends at Gueydan Memorial Guest House, where she lived her last years after leaving the Dore home, and where she died. She will be missed by her many relatives and friends.