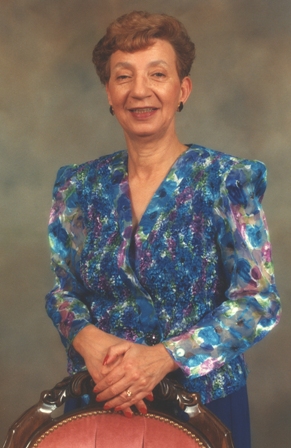 Chermaine Lombard-Hayes died peacefully at home in the early morning of March 17, 2013. She was born to Louis and Lucille (Douroux) Lombard in Algiers, La., Nov. 5, 1931.

At the age of 13 her parents moved the family to Bremerton, Wash. and a few years later into Seattle as her parents looked for employment opportunities. Chermaine graduated from Holy Names Academy High School and went to Seattle University.  While at Seattle University she met the love of her life, John Frederick Hayes. They married on Aug. 16, 1952 and recently celebrated their 60th Wedding Anniversary.

Chermaine retired from the City of Seattle Municipal Courts after 20 years of service. She spent a majority of the time as a clerk/bailiff for Judge Ron Mamiya. Before that she worked for the Post Office, Boeing and a shelter for young girls. Her funniest moments came as a bailiff when she would help individuals, about to go before the judge, make a good appearance. She would tell them that they better pull their pants up, tuck their shirt in, take their hat off or turn off their music before going inside the courtroom. She would tell the person that this would be a real good time to try and make a good impression. They would often look down at her and smile. As she look at them and let them know she cared.

Chermaine loved her family, community and church. She was serious about maintaining traditions she grew up with. They were instilled in her family and supported by the friends she had. There were traditions about the food we would eat, songs we would sing, the community involvement we had and love for our neighbors no matter who they were. Like her mother, Chermaine advocated for racial harmony. She was a member of Saint Peter Claver Interracial Center, Black Catholic Lay Caucus, NAACP and the St. Martin de Porres Guild. She advocated for the recruitment of Black priests, the canonization of Black saints and scholarships for Black students to attend parochial schools. In the early 70s Chermaine pulled her talented mother, brothers, kids and church friends together and started the Immaculate Conception Gospel Choir. Among the first of its kind in the Catholic Church. Like most of the things in her life she did, this wasn't without controversy.  With the assistance of a progressive Archbishop and church pastor the music remained.

If you knew Chermaine you knew she loved life. She could play every song requested on the piano or the guitar with the four or five cords she knew. She loved singing and dancing to Zydeco music, because it reminded her so much of New Orleans. She loved her New Orleans cultural heritage and would serve some of the best Creole dishes for dinner. The thing she loved the most was dancing. She danced to everything, all kinds of music. And she loved the Electric Slide. It didn't make a difference what style of music it was (country, rock, R & B) it was Electric Slide time.

Chermaine loved and cherished her family. Her husband of 60 years John F. Hayes Sr. is someone who was always by her side. Her heart was in raising her seven children with her husband. Her children John (Ricky) F. Hayes Jr., Gordon B. Hayes, Cat herine Chastang, Terence B. Hayes, Gloria A. Hayes (preceded in death), Thomas C. Hayes and Jason R. Hayes brought her joy, support, love and its share of challenges. There was never a dull moment. It was an adventure and that's how she liked to live her life.