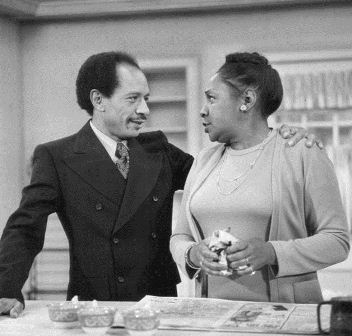 (CNN) -- Sherman Hemsley, who played the brash George Jefferson on "All in the Family" and "The Jeffersons," died Tuesday at 74, his booking agent said.

Hemsley played Jefferson, a wisecracking owner of a dry cleaning business, on "All In the Family" from 1973 until 1975, when the spinoff "The Jeffersons" began an 11-season run on CBS.

Police in El Paso, Texas, where Hemsley lived, said there was no evidence of foul play. The cause of death will be determined through an autopsy, according to a news release.

For the first few years on "All in the Family," George Jefferson was not seen, only referred to by his wife, Louise, played by the late Isabel Sanford.

He told Archive of American Television in 2003 that he was told by the show's producers that Jefferson should be "pompous and feisty."

Jefferson was every bit as big a bigot as his neighbor, Archie Bunker, played by Carroll O'Connor. Jefferson often referred to white people as "honkies."

He was also mean and condescending to his neighbors, his son Lionel and, when he moved to a ritzy apartment on Manhattan's East Side, to his maid. But his character was still wildly popular with TV audiences.

"By me loving Louise and Archie loving (his wife) Edith, you got away with being goofy and stupid," he said in 2003. "Because people said at least he loved something."

It made Jefferson human, he said.

One of his former co-stars said she was shocked to hear he had died.

"I thought Sherman was doing very well," said Marla Gibbs, who played feisty maid Florence Johnston on the "The Jeffersons." "I am saddened to hear that Sherman has made his transition. We were trying to come up with a new show that we could participate in, but of course, that cannot happen now.

"Sherman was one of the most generous co-stars I have ever worked with. He happily set me up so that I could slam him, and I did the same for him. I shall miss him deeply."

Hemsley said he drew on his experiences as a young man to develop Jefferson's celebrated strut, which he did during filming as a joke.

"The way we walked in South Philly, you think you bad," he said. "You gotta be important.

"We had done about seven or eight takes (on the 'Jeffersons' set) ... and then we started clowning around," he said of the walk. "That's the one they kept."

"With the passing of Sherman Hemsley, the world loses one of its most unique comedic talents, and a lovely man," Norman Lear, the creator of "All in the Family," said in a statement.

He remembered him "singing and dancing, and (Hemsley) was one of the most unique actors on the stage."

In 1990, he released an album, "Ain't That a Kick in the Head," and two years later another, entitled "Dance."

"I had the pleasure of working with him on 'House of Payne,' " said producer and director Tyler Perry. "He brought laughter and joy to millions. My childhood would have been a lot sadder without him. Thanks for the joy, thanks for your talent and thanks for your life. I celebrate it in all of its beauty. God bless you, Mr. Hemsley."

Hemsley was nominated for an Emmy in 1985 but lost to Bill Cosby.

CNN Entertainment contributed to this report.