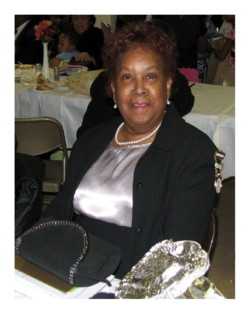 Evelyn leaves behind her immediate family, four grandchildren, four siblings, a host of nieces and nephews, and relatives and friends.

She was the third child born to the late, Erskine and Ruby (Mabry) Bowden. Her siblings; Mae Frances, Erskine "Junior", Robert, Lonnie, Nancy Joann and Leila all made Portland their home.

While in Arkansas, the gentle queen of tranquil spirit was a soft-spoken soul who received her early footings as a young child in the small rural town. In 1952, the family made a bold and fervent leap, and relocated to the Pacific Northwest to seek a better life. Once in Portland, Evelyn immediately enrolled as a student at Highland Elementary School; completing her grammar studies in 1956. Later that year she then enrolled at Jefferson High School where she graduated in 1960.

During her early adolescence, Evelyn united and was baptized into the Baptist faith at the Vancouver Avenue First Baptist Church under the spiritual leadership of the late Dr., Reverend O.B. Williams. While in church she was actively involved in numerous activities of the ministry that included singing in the Young People's Choir, Ushering, Young Women's Auxiliary, attending Baptist Training Union and Sunday School.

Evelyn who had excellent hand of penmanship, was appointed recording secretary of the Sunday School Minister during her senior year of high school. In her later years of life, Evelyn rejoined the Adult Usher Board where she greeted parishioners with her genuine smile. Even when her health began to fail her, and could no longer stand for long periods, Evelyn was still determined to help out the team on Sunday mornings. Evelyn was a woman who loved and cared about her church and church family, in addition to her Ushering role, she also took up an active role in other activities of the ministry.

When she married, Evelyn briefly left Vancouver Avenue and attended the Albina Church of Christ with her husband and late Mother in law (Willa Mae Baker), whom she adored and respected greatly, became an active member in the sixties and early seventies under the leadership of the late Rev. Jackson and Rev. Richardson; but she soon returned to her home church of Vancouver Avenue in the eighties; where Pastor J.W. Matt Hennessee became her faithful and caring spiritual leader.

Following her higher academics studies completed at Jeff, Evelyn enrolled in beauty school and quickly learning the art of styling hair; she was the master of the old fashion press-n-curl! It was during this time in her life that Evelyn became a natural born redhead, something her father didn't quickly adapt too at first. Under the apprenticeship of Isabelle Jackson-"Belle's Beauty Shop", Evelyn continued to hone her artisan skills in styling up the hair-dos. After her stint at Belle's, Evelyn continued doing hair in her home for years; charging as much as $5 a do.

On July 1 1961, she met and married the love her life, Raymond Burell Jr.; the couple was joined in holy matrimony in Vancouver, Washington. This past Sunday the couple would have celebrated their 51st Wedding Anniversary. Raymond and Evelyn soon begun to rear an expanding family, five sons were born between "1962-1969": Raymond III, Sherman, Oscar, Gerald and Gregory. As a nurturing mother, motherhood was something Evelyn valued wholeheartedly, she cherished and relished it with great joy and responsibility; she adorned and supported her children's aspirations and goals to the fullest. Once her two youngest sons were of age, she entered the workforce as a Registered Nurse's Assistant with Good Samaritan Hospital in Portland, and later as a care giver at the Bishop Morris Care Center. Evelyn's caring and giving spirit made her life's calling as nurse a rewarding and fulfilling occupation.

Outside of work her hobbies included events and activities centered on the celebration of family and friends. Evelyn loved to cook and plow her brown hands in the earth rows of gardening—she loved to be surrounded by God's flowers and plants. Evelyn also loved to gamble, the dig-dig-dig of the slot machines of Reno, Spirit Mountain and the Dog Track were fun pastime occasion of hers. Evelyn also held an adventurous streak, she loved to travel and see the sites of the world as often as she could.

In the sunset of her years, the role of doting grandmother was one of the monumental events in her life that brought her the greatest joys. When her four grandchildren were born; Elizabeth "Lizzy," Ganiece, Rollin and Little Oscar, the role of "Grandma" solidified her maternal achievements in life. She loved those babies! Throughout her lifetime, Evelyn was a woman who sought a positive atmosphere of goodwill among all she touched. She remained positive and true to herself in all aspects of her journey.

Through her strong-willed nature, she governed her life with grace, dignity, dedication and will. Often viewed as the matriarch of the family, Evelyn was the one you called on for things relating to family matters; she was always there for you when you needed her. If you were every sick she'd call you or come by, send a card and/or see you personally. When you saw Evelyn, she was always holding a cheerful disposition with a pleasant glow. During the last ten years of her life brought the greatest physical challenges; she often found it difficult at times to understand why her illnesses had plagued her later life with such anguish; but through it all she remained as positive and grounded as she could in her faith, family and friends. Through seeking divine revelations and holding firmly to the relationships she had forged in life, brought her the greatest comfort in the very end.