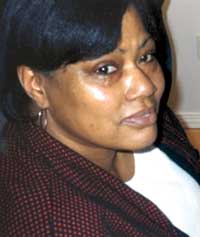 Dorothy Mae Davis, 57, of Portland, OR, died Monday, June 18, 2012 of metastatic breast cancer, which she battled for over 6 years. Ms. Davis was born June 30, 1954 in San Bernardino, CA to Joe and Emma Davis. She spent her life serving others with unconditional love and acceptance, and she left a lasting impression on everyone who came to know her. Ms. Davis epitomized the definition of selflessness, always putting others first, especially her children. She was very compassionate with a big heart for young people, often taking in other children whose home environments were less ideal. While Dorothy only had 2 children, she was a surrogate mother to countless others. She worked for DHS as a Caregiver for many years until she was unable to do so due to health.

Viewing for Dorothy Davis will take place at Terry Family Funeral Home – 2337 N. Williams Ave., on Thursday, June 28th from 4pm-7pm. Homegoing Service will be held Friday, June 29th at 11am at Maranatha Church of God – 4222 NE 12th Ave. with another viewing from 10am-11am prior to service. The family requests in lieu of flowers and gifts, donations are made to the Dorothy Davis Benefit Memorial Fund at Wells Fargo Bank. Simply provide her name and zip code "97229", or visit www.wepay/donations/doroth-davis-benefit-memorial-fund to make contributions online.