Rob Ingram Dies at 38: He Led the Portland Office of Youth Violence Prevention 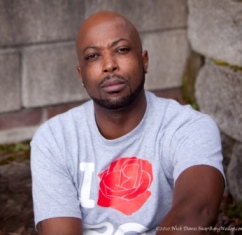 Rob Ingram, director of the Portland's Office of Youth Violence Prevention, died suddenly Sunday Nov. 27 of a heart attack, at just 38 years old. He leaves behind his wife of 11 years, Dana Ingram, and his five children: Shamyua, Derriel, Renee,  Njeri, and Kai.
With friends in every corner of the city, Ingram was known as a tireless champion for young people, but particularly for poor and minority teens.
"I don't work for the police department, I work for kids," was his motto.

Mayor Sam Adams released a statement saying:
"Today, sadly, we lost a friend and public servant, Rob Ingram, who was passionately dedicated to the success of all Portlanders, especially our youth of color.
Rob was a man of wit and wisdom and he will be deeply missed. Our thoughts and prayers are with his spouse Dana and his entire family."

The International Fellowship Family will host a celebration of his life at noon Friday, at 4401 NE 122nd Ave. Viewing will be held 10 am until 11 am Friday, Dec. 2 , at the church; or from 5:30 pm to 7:30 pm, Dec. 1, at Caldwell, Hennessey, Goetsch & McGee, 20 N.E. 14th Ave."He was an excellent leader and I expected him to be a force in this community for decades to come," said Marcus Mundy, president of the Urban League of Portland. "Everything he did in the community was positive. He had a lot of passion and he worked very hard. He wasn't getting rich doing it – he was fairly selfless. He was a good family man: a loving family man and husband. He was just a very nice person on top of everything else."

Ingram was The Skanner Foundation's Drum Major for Justice in 2010. The award recognized his immense contributions to the city's youth outreach program.  After receiving the award Ingram wrote about his reaction.
"An award I received today, but am still trying to understand in its totality.â€¨You see, the award signifies Rev. Dr. Martin Luther King's proclamation that he would always be a drum major for justice. And for me this is both significant and overwhelming because I do, and have always, looked at Dr. King as one of the most significant people to walk this earth, immediately below Jesus (at least on my list). I do what I do because I believe in us. I have faith that as a people we can and will achieve justice; true justice where poverty, racism, sexism, and disparity do not exist.
"I have a very simple philosophy: I try to use every day as an opportunity to do something to improve myself, my family, my community and thereby my society. In doing so, I know that I am changing the future for the better. I embody my purpose on this planet as one who exists to make things better for those who will take the reins next. I take that philosophy very seriously, but myself seldom. I laugh at myself because, well, why not?"

A gifted writer, Ingram blogged for The Skanner News, and was a columnist with Portland Family magazine. His subjects were the challenges of parenting, ordinary life and building compassionate community.
"Many people hold positions of power, but sadly, for too many, it infrequently translates into true community action," said Rochell "Ro Deezy" Hart. "Rob Ingram was different. He did not just hold positions which signified change, nor did he simply work for change, he was the change."
Ingram intimately understood the pressures on young people and the reasons why marginalized youth gravitate to gangs. After moving to Portland from Fresno, Calif., he struggled as a youth to be both true to his friends and free from gang allegiance. He never forgot what it felt like to be that struggling kid, and his experience fueled his determination to help young people escape those traps.

After working with Emmanuel Community Services, he dedicated his life to being a positive force in the lives of young people. He worked for the Boys and Girls Clubs of America, touching the lives of thousands of children over his career and personally mentoring many youth.
"When he was a kid he was a little brother (in the big Brothers Big Sisters mentoring program) and when he grew up, he decided to pay it forward and be a Big Brother," says Chabre Vickers, director of community relations and diversity programs for the nonprofit. "He thought about how to support the agency all the time.
"Who is going to do all that work? He was doing the work of 10 men. And his work impacted people in a way that no other person's did. The loss is just monumental."

Through his studies at Warner Pacific College, Ingram earned a degree in Business Administration. He also served on the Big Brothers Big Sisters of Columbia NW African American Advisory Board, as well as on the site council of Woodlawn Elementary, and with The Safe Place, a faith-based nonprofit. He was a proud member of the Omega Psi Phi fraternity.
Ingram played an active role in his church, The International Fellowship Family, 4401 NE 122nd Ave. Bishop Stephen Holt is handling communications for the family. Bishop Holt was one of several church leaders who organized Portland's faith community this year to support struggling youth and families through the 24/11 initiative.
"He was like my son in the Gospel," said Bishop Holt. " Rob I think, is an example of manliness: committed to his family, to community, to his children and to his church. He didn't just talk about it; he walked it."

As the leader of the city's efforts to end gang violence, Ingram was outspoken in his view that the root of the problem lies with a society that denies basic resources and care to poor children and families.
"These are our children and they are exactly what we have created," he said last September, after an apparently random shooting left six teens wounded. "So if we are so angry and disgusted, then we need to do something."

Doing something was exactly what Ingram was known for. His upbeat personality inspired and uplifted others. His daily Facebook posts were full of hope, encouragement and fun. He loved stylish shoes and wore them well, as comfortable in his immaculate suits as he was in casual sports clothing. A connector of people, places and ideas, he moved between worlds building understanding and community wherever he went.
"Rob was a great dude; motivational, inspiring and hard working," says Sam Thompson, a youth and community advocate. "He had a passion for helping our community and he was able to go through doors a lot of us couldn't. He was a voice for the hood, bringing our perspective to City Hall. He helped me a lot."

As President of the Urban League of Portland's Young Professionals, Ingram pushed his group to achieve and strive. His expectations were high, but no higher than the standards he had for himself.  Ingram told The Skanner News he planned to write his autobiography one day, but had work to do first.
"He had a tough job to do with the city in trying  to curtail youth violence," says John Canda, who previously held his position. "I still don't believe people understand what an awesome responsibility that is. Rob did it well."

Rob left no doubt how proud he was of his family. And he had good reasons to be proud. His oldest son Derriel Ingram, now a student at Lane Community College, led the Black Students Union at Benson High School last year, and also won the state wrestling championship. Encouraged by his father, Derriel Ingram has spoken out at events aimed at bringing community support to families and children, explaining what it feels like to be a Black teen in a world where youth of color are often viewed with suspicion.

Many others in the city, who knew Ingram through his work for at-risk youth or through his inspirational leadership of the Urban League's Young Professionals, can hardly believe he has gone forever. Many hoped and expected that he would rise to greater prominence some day, maybe running for mayor or to be Oregon's first Black Senator.
"He was here to make an impact and he did," says Rep. Lew Frederick. "We needed to have him a lot longer than we did.
"He left a legacy and a challenge. I hope we are up to it. I think we are up to it."

MORE: Rob Ingram In His Own Words

Tributes to Rob from a few of those who knew him well.