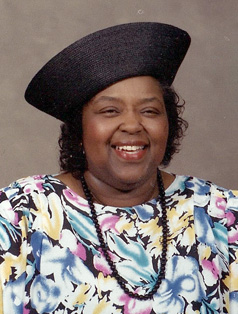 Sue Carolyn Carey was born in Vanport, Oregon on Nov. 4, 1944, to Rev. Booker T and Mrs. Gracie Carey. She was the third of four children. She attended Holladay and Eliot Elementary Schools and graduated from Girls Polytechnic in 1962. After high school, Sue moved to Seattle, WA., where she worked as a head cook. Later she moved back to Portland to attended Portland State University to become a teacher. Sue was employed as a cook at the Oregon Health Science University; Language Arts Teacher at Sabin Elementary School; USDA (United States Department of Agriculture) Coordinator with the Albina Ministerial Alliance Family Day & Night Care, and Health Coordinator at Albina Head Start, where she worked diligently until her health began to fail.

Sue is the mother of 2 children who she was extremely proud of, Lisa and Michael McConnell. She loved to write poetry and she loved to cook, so that she could feed anybody that was hungry or anybody that wanted some good ole' home cooking. She was known for her dressing and peach cobbler, it was often requested at many family and church dinners. Sue served as the Board Chairperson for the Portland Sickle Cell Anemia Foundation; she was honored by 2 of Oregon's Governors', Vic Atiyeh for her magnificent participation to strengthen families with the White House Conference of Families Taskforce; and Neil Goldsmith for being a member of the Oregon Health Council for 3 years. Sue's favorite color was red, and she was often heard saying "When I'm old, I'll wear purple and red" and she did!

Adhering to the principles and practices of her parents, Sue was a devoted and active member of the Smith Chapel CME Church where she served in various areas of the ministry under the pastorship of the Late Rev. Ira D. Mumford. In 1984 she united with The Greater Saint Stephen MBC under the leadership of the Late Dr. A. Bernard Devers, I. For the next 26 years she faithfully strived for the advancement of this church, Sue served in various leadership roles within this ministry, Deaconess, Women's Ministry Leader, Sunday School Teacher, and Chairperson of the Finance Ministry. For years she was instrumental in orchestrating the Annual Ole' Landmark Day for the Mother's ministry. In 2003 she was licensed by Pastor Victor D. Reynolds to preach the gospel as an Evangelist; she also chaired several church anniversaries, pastor appreciations and the installation service of Oregon's 1st African American female pastor of a Missionary Baptist Church.

Evangelist Carey resided in the Rosemont Court Apartment where her work as an evangelist did not cease; she hosted the church's second Alice O. Guinn Food Pantry, and conducted a bible class, and a poetry writing class. Evangelist Carey was a giver, a giver of her time, talents and her treasure. Regardless to where she was (Bess Kaiser, Fred Meyers or the Dialysis Center) or how she was feeling, if she was aware of your need, she would do everything within her power to assist you with your need. She always put the needs of others before her own. To many family, friends and acquaintance, she exercised her many skills as a lawyer, doctor, counselor, clinical therapist, advocate, teacher, life coach, mother, grandmother, sister and friend. She never met a stranger.

Evangelist Carey believed in the power of prayer – she exemplified worshipping the Lord in spirit and in truth. The manifestation of Christ in her life touched the lives of many, even until her last breath. She was preceded in death by her parents, and sister, Margie Curry, uncle Chappel Edwards, cousin Jeannie Edwards and niece Kellie Jean Carey all whom Sue loved dearly. She will forever be loved and treasured by her children: Lisa McConnell of Arlington, TX; Michael (Connie) McConnell of Portland, OR; sister Joyce Jones of Richmond, CA; brother Henry (Fran) Carey of Tigard, OR; 13 grand children and three great grand children. A host of nieces, nephews, cousin and friends.