Family and friends of a missing 14-year-old are desperately looking for information that might lead them to the whereabouts of the young girl. Yashawnee Vaughn, a student at Helensview School, was last seen at around 7 p.m. on Saturday, March 19, at the number 72 TriMet bus stop at Thompson Street and 82nd Avenue near Madison High School. She is an African American about 5'2" tall, weighs 115 pounds and her hair is usually shoulder length. Her mother Shaquita Louis told The Skanner News that she was on her way to visit with a close friend, but failed to show up.… To read the whole story click here 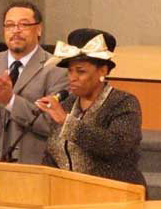 MARY 'LIZ' PAIGE BRINGS GOSPEL COMEDY TO PORTLAND
She's been called the female Tyler Perry. But comedian and writer Mary Liz Paige admits she has a ways to go before living up to that moniker. On April 1 and 2, Paige brings her critically acclaimed gospel comedy "Let's Talk Church" to Portland's Winningstad Theatre. Paige takes on the central role as the reformed pole-dancer turned talk show DIVA (Devoted Inspirational Victorious Attitude) who is taking over Oprah's prime television slot … For all the information click here

WILMINGTON 10'S ATTORNEY JAMES FERGUSON REFLECTS ON CASE
The National Newspaper Publisher's Association announced this week that it will be leading a push to formally pardon the Wilmington 10. In 1972 in Wilmington, NC, 10 young people, nine of whom were Black, were convicted of arson and conspiracy after a trial bereft with recanting witnesses, a prosecution that withheld evidence and tampered with witnesses and jurors who were openly prejudiced …. The attorney who defended the 1972 Wilmington 10 case, James Ferguson, II, spoke with The Skanner News .… To read the whole interview click here

JOIN THE STATE OF BLACK AMERICA WEBCAST MARCH 31
Marc H. Morial invites you to join the debate about the number one issue facing the nation – the deep and persistent jobs crisis that has been especially devastating in urban communities of color. As part of the National Urban League's annual Legislative Policy Conference in Washington, D.C., they will convene a free State of Black America town hall meeting …. If you can't attend in person, the event will be webcast live at www.TheSkanner.com beginning at 10 a.m. Eastern Time … To check the times click here

MATHIS' MIND: DON'T CUT HEAD START FROM FEDERAL BUDGET
After being urged by President Obama to invest in our nation's students, you would think our federal lawmakers would do anything they could to preserve a program that sets the foundation for a lifetime of achievement, right? Wrong. Once again, Republicans are moving to cut a program that helps average Americans and, in this case, specifically the poor. The Head Start Program is yet another social program the Republican Party has targeted for major cuts … To read the whole story click here

encouraging overdrafts and manipulating customer accounts. Comments in the media suggesting Americans overwhelmingly choose expensive debit card overdraft coverage overlooks the millions of customers at banks that do not offer the high-cost option and ignore the heavy-handed marketing that banks have used to persuade customers to "opt in" to a costly service… For all the information click here

'PASS IT DOWN' COOKBOOK CHRONICLES RECIPES FROM NOTABLE BLACK CHEFS
"The Pass It Down Cookbook is filled with recipes that reflect the generations-long need to document and share our history and culture. The recipes in this book are accompanied by personal stories that provide us with a unique opportunity to preserve our cooking heritage. Filled with poignant memories of the past, and the present triumphs of both the acclaimed and unknown black Americans who impacted the way the whole nation eats … For all the information click here