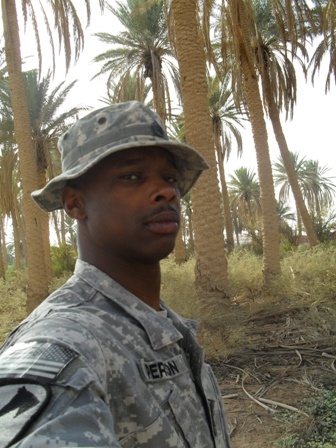 After one full year's deployment at the Al Asad Air Base in Iraq, Staff Sergeant Jerome Person and his comrades in the Oregon Army National Guard HHC 141 Battalion Support Brigade, celebrated their demobilization ceremony today at the University of Portland Chiles Center.
A Portland native who graduated from Benson Polytechnic High School in 1990, Person, 38, has served in the military ever since his teen years.
He took a few moments from his busy schedule to speak with The Skanner News about his life, his family, and the war effort.


The Skanner: What made you decide to join the military?

S: Do you have plans for what you might do next or are you going to keep working full time with the Oregon Army National Guard?

P: Full time for the Oregon Army National Guard and then I'll take some classes.

S: Do you have any other interests? What are you thinking about education-wise?

P: Taking Japanese and going into the medical field.

S: Why do you have the interest in Japanese?

P: My wife's Japanese. Her name is Chiharu.

S: Do you think you're ever going to go live in Japan?

P: Possibly, if all goes well.

S: And you have two kids. How old are they?

P: A UVA is, if a soldier is raped or if something happens to a soldier in a sexual manner, or even in a non sexual manner, they have to report it. We assist a soldier with the next steps, going to the doctor, going to stress management, assisting them with the process. If you were raped or something happened to you, we would be told, 'hey, you're now the case manager for this soldier,' we would then be there with you as much as you wanted us to be there, and assist you with walking through the process of going and talking to legal, talking to criminal defense, the investigators, going to the medical, being there with you.

S: Last year I was reading about the military command bolstering those efforts to help people who had been assaulted. How is that going? And do you feel as thought there are issues that people are dealing with around that maybe more effectively than they were in the past?

P: It's working, but it's about getting people not to be afraid to talk. Because of the way, not just the military, but the larger society, is, if you say something you're going to be shamed. Making them more comfortable and getting soldiers to see, this is not your fault, don't be ashamed, this is what happened, it's just the situation. Because no one deserves to be assaulted.

S: You also talk about being on several deployments over the past several years, and how things have changed since 2004, 2005, in the war zone there. Now the draw down's going on, can you talk a little bit about how things are different? Is it better? Are people looking forward to shutting down the war effort?

P: In my opinion, based off my first deployment here -- I think we were the second wave in -- the equipment was okay but wasn't great as we have it now. There were a lot more uncertainties with the people, how they looked at us, how we viewed them. Whereas now there's more certainty – they want to be on their own.
Us leaving is a milestone for them, and it's also a milestone for us because we've been here for so long and now we're shifting our efforts more towards the Afghanistan theater of operations.

S: Do you think you're going to sign up maybe to go to Afghanistan in the future?

S: It is impossible for people stateside to understand what it's like to be defending your country, to be in the war zone. Are there myths or misunderstanding about the war effort that people who will never go there just don't know?


P: There's always myths, really.
It's different – whereas you look at World War II, we didn't have mass media as we have mass media now. So the only information that was sent back was time-delayed, whereas now it's right here, right now, this is what you see.
And it's more driven towards the populace, the Iraqi people, as far as what the media has portrayed. There were a lot of things on my first tour here that they focused more on the deaths of soldiers, whereas Pearl Harbor had more deaths than we've had the whole time, and that was in a single day. We're almost equal to what we had there in the whole duration of this whole war here in Iraq.

P: I guess to know is that it's not all for nothing, that yes we have had soldiers who lost their lives, but with any war, with any job that's the risk we take and we choose to take it. We're no different than a firefighter who runs into a house to save a child, no different than a police officer who goes to a domestic violence call. So what we do, we're just a little different, we're here in a different theater, we look at people the way we would want them to look at us. We have relationships with people, we have friendships with our interpreters, people that we work with that are on our base. And that we, as a society, we don't know what it's like. We take life for granted. I've seen kids walking around here with no shoes, living in garbage dumps. At the same time in America, here we are, complaining that we don't have health insurance.

S: What I hear you saying is, we don't know how bad it can be.

S: So very soon you get to come home to Portland. I came from a military family and I can remember what that's like. When my dad would come home, and when my sister's husband would come home and the stuff that she would do was really funny. When you do get back home, what's going to be the absolute first thing that you do?

P: Spend time with my kids, with my wife.

P: We've already decided we're going to the coast for a week, just us, and spend time together.

We at The Skanner News wish to welcome our National Guardsmen and women home from a difficult assignment, and thank them for their many sacrifices. May you all have the freedom to enjoy your communities' love, support and respect.