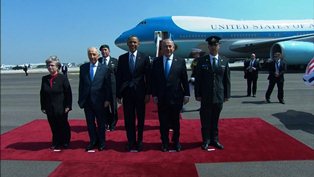 (CNN) -- President Barack Obama arrived in Israel on Wednesday to launch a four-day swing through the Middle East amid growing concern that chemical weapons in neighboring Syria could wind up in the hands of Hezbollah, an avowed enemy of the Jewish state.

The president's first foreign trip of his second term also was his first visit to Israel as president, and aides said he wants to assess the status of the peace process and signal his administration's support for a crucial partner in the volatile region.

After meeting with Obama, Israeli President Shimon Peres said "we cannot allow" Hezbollah in Lebanon to get hold of Syria's chemical weapons, adding that "it could lead to an epic tragedy."

At the same time, Peres said he and Obama agreed that the "greatest danger" facing the Middle East was a nuclear Iran.

Both Peres and Obama sought to alleviate any concerns among Israelis that the United States would deviate from its stated opposition to allowing Iran to obtain a nuclear weapon.

Obama said "the state of Israel will have no greater friend than the United States" in seeking the mutual vision of giving the children of the Jewish state and other countries in the region "the opportunity for security and peace and prosperity."

Earlier, Peres and Prime Minister Benjamin Netanyahu greeted Obama at an arrival ceremony in Tel Aviv to launch Obama's trip, which also will include stops in the West Bank and Jordan.

"Across this region, the winds of change bring both promise and peril," Obama declared at the ceremony. "So I see this visit as an opportunity to reaffirm the unbreakable bond between our nations, to restate America's unwavering commitment to Israel's security, and to speak directly to Israel and to your neighbors."

In a quip to Netanyahu, Obama said, "It is nice to get away from Congress," reflecting the chronic political infighting in Washington.

The trip began as pressure built on his administration to increase support for the Syrian opposition in the civil war that started two years ago and has continued to escalate in recent months.

Poll: Most Americans say Israel is a friend

Israeli Justice Minister Tzipi Livni told CNN on Wednesday that "it is clear for us here in Israel" that chemical weapons have been used in Syria, and an international response to the crisis should be "on the table" in the talks later Wednesday between Obama and Netanyahu.

When pressed during an interview in her Tel Aviv home, Livni wouldn't say whether there was evidence that the regime of Syrian President Bashar al-Assad has directed the use of chemical weapons.

Obama has called the deployment of chemical weapons a "red line" for a more dramatic U.S. role in the Syrian conflict.

To Livni, the development poses a direct threat to Israel because "the appearance is that it's not going to be only in Syria, but that Hezbollah can reach all these chemical weapons and use them against Israel in the future."

Israelis have long been concerned that Hezbollah, Israel's foe in neighboring Lebanon, could gain possession of Syrian chemical weapons if the al-Assad regime is further destabilized.

Afterward, the president went to Jerusalem to meet separately with Peres and Netanyahu.

Iran's nuclear ambitions will be a major focus of Wednesday's talks.

As he prepared for this trip, Obama told an Israeli TV station he believed there was still a year or so before Iran reached the final development stage -- suggesting he believes there is more time for diplomacy than Netanyahu would like.

Netanyahu, meanwhile, has voiced concerns that Washington has a less urgent view of Iran's progress toward developing any nuclear warhead, but has welcomed the administration's more muscular language recently that "all options" are on the table.

Iran claims that its nuclear ambitions are peaceful.

In his first term, Obama got off to a rocky start with Netanyahu by pushing for a freeze on Israeli settlements, but his vocal support for the Israeli prime minister through the November crisis with Hamas and U.S. financial support for the Iron Dome anti-missile program could pave the road for greater trust in the relationship.

White House officials said Obama was not bringing a new peace initiative and lacked optimism that enough solid ground existed to try to revive direct negotiations between Israel and the Palestinians over the declared goal of both sides for separate, neighboring states.

Most of all, the president's aides said, Obama wanted to assess how prepared -- if at all -- Netanyahu and Palestinian leader Mahmoud Abbas were to return to negotiations.

Palestinians want Obama to prove there were consequences for Israel's continued construction of new settlements in what they consider to be disputed areas.

Their grievances are evident in more personal ways: Posters on Ramallah streets sarcastically advise Obama not to bring his smartphone because Israel does not allow 3G or better service in the Palestinian territories.

Before meeting Peres on Wednesday, Obama and the Israeli president planted a magnolia tree descended from those at the White House to symbolize the deep roots of the relationship between their nations, the White House said.

The two leaders also were serenaded with the song "Tomorrow" by three young Israelis who dedicated it "from all the children who dream of peace."

CNN's John King and Jessica Yellin reported from Israel, and CNN's Paul Steinhauser and Ashley Killough also contributed to this report. It was written by Tom Cohen in Washington.