'No Labels' Wants to Get Republicans and Democrats Talking 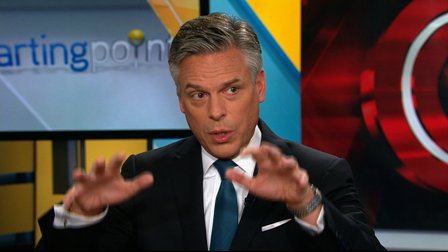 (CNN) -- As Americans remain fed-up with Congress, who are largely seen as "do-nothing," one group is setting aside talk of action and starting with a more modest goal: talking.

"The only way we're going to get traction on the issues that really do matter -- whether it's balancing budgets, energy, immigration, you name it -- is to get some people, Republicans and Democrats alike, who agree to meet on a regular basis and focus on problem solving," Jon Huntsman, a national leader of the group "No Labels," said Monday on CNN's "Starting Point."

Huntsman, a 2012 GOP presidential candidate and former governor of Utah, said the partisan temperature in Washington had reached a "boiling point" that prevents members of opposing parties from cooperating. His group is unveiling a list of current lawmakers at an event in New York Monday who plan to meet on a regular basis in an attempt to lower the heat in the Capitol.

Huntsman is joined by Sen. Joe Manchin, a moderate Democrat from West Virginia, as a national leader of No Labels. Manchin said Monday that in his two years as a lawmaker in Washington, he has yet to attend a bipartisan meeting of senators "where Democrats and Republicans talked about the problems of the day, to try to find commonality."

"Whether you're a Democrat or Republican, whether you're a conservative or liberal, and you really want to get things done, you have to be able to have that dialogue," Manchin continued. "Never did I think I would go to the Senate and make history in being the least productive Congress in the history of our country. I'm frustrated, and I want to do things."

One way to get Congress working: enforce a 5-day work week, with the House and Senate coordinating schedules. Currently Congress is generally only in session on Tuesdays, Wednesdays and Thursdays.

Another No Labels proposal stipulates that if members of Congress don't pass annual budgets and spending bills on time, they won't get paid.

And then there are those bipartisan meetings, which No Labels says should take place monthly and remain off-the-record. Manchin asserted Monday the appetite for such meetings was strong among his colleagues.

"There's more people in the Senate, whether it be Democrats or Republicans, that are well intentioned, that want to get something accomplished. They just haven't had the opportunity," he said. "No Labels provides that vehicle, that venue. If you want to solve a problem, if you're in Congress right now and you're as frustrated as I am, whether you're Democrat or Republican, then join No Labels and come to our problem solving meetings."