Mccain Chokes Up As He Praises Suu Kyi at Congressional Ceremony 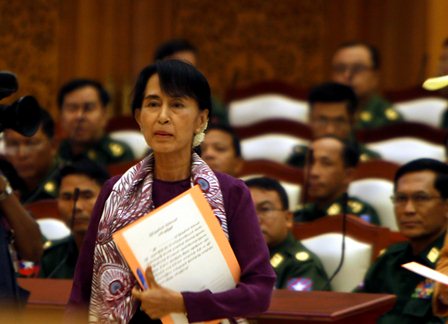 (CNN) -- Sen. John McCain was overcome with emotion on Wednesday when he, among other political heavyweights in Washington, praised Aung San Suu Kyi.

The 67-year-old Myanmar democratic freedom activist is on a 17-day tour of the United States and on Wednesday she was presented with the U.S. Congressional Gold Medal. The presentation of the medal was prefaced with numerous speeches for influential U.S. leaders.

"They did all they could to break her," the Arizona Republican said of the military junta that detained her. McCain, who was a POW in Vietnam, choked up, his voice breaking.

His comments were met with wild applause.

Suu Kyi was kept for the better part of two decades under house arrest for advocating for democracy in Myanmar. The country's former military rulers ordered her detention, and in recent years her case has received an international spotlight. She paid a hefty personal price for standing up for freedom in Myanmar which suffered from 50 years of autocratic, repressive rule.

She was freed in 2010 and elected to the Myanmar parliament this year, a historic moment in the country.

Suu Kyi was scheduled to meet with President Barack Obama later in the day.

"The president looks forward to her visit, as it provides another opportunity to reaffirm our long-standing support for her struggle and the struggle of many others toward democratic, just and transparent governance in Burma," White House spokesman Jay Carney said. "This is her first trip to the United States in more than 20 years. The president very much looks forward to that visit."

Over the next two weeks, Suu Kyi is scheduled to meet with high-level American officials, as well as democratic activists. Also on Wednesday she met with U.S. Sens. Harry Reid, D-Nevada, and John Kerry, D-Massachusetts, among others.

At the start of her visit Tuesday, she met with Secretary of State Hillary Clinton and made an address at the U.S. Institute of Peace in Washington, during which she said she supported the further easing of U.S. economic sanctions on Myanmar.

"I do not think we should depend on U.S. sanctions to keep up the momentum of our movement for democracy," she said. "We have got to work at it ourselves."

Under President Thein Sein, the Myanmar government has released hundreds of political prisoners in the past year, part of a series of reforms that have followed decades of repressive military rule. Western governments have responded to the efforts by starting to ease sanctions originally put in place to pressure the military regime.

Myanmar authorities have also engaged in peace talks with rebel ethnic groups and allowed Suu Kyi's party, the National League for Democracy, to successfully participate in by-elections for the national parliament in April.

Suu Kyi and others have nonetheless cautioned that progress toward greater freedoms in Myanmar, which is also known as Burma, remains embryonic and fragile.

"I think one of the important reasons for her visit at this time is to remind us of how much more still lies ahead, from strengthening the rule of law in democratic institutions to addressing the challenges in many of the ethnic conflicts and in Rakhine State," Clinton said Tuesday in an introduction to Suu Kyi's address.

Communal violence between Buddhists and Muslims in the western Myanmar state of Rakhine this summer killed scores of people and displaced thousands of others. Human rights advocates have accused the authorities of cracking down particularly harshly on the Rohingya, a stateless ethnic Muslim minority, during the unrest.

Suu Kyi's U.S. trip coincides with a visit to New York by Thein Sein to attend the U.N. General Assembly, where he will meet with Clinton.

On Monday, the Myanmar government announced that it was releasing more than 500 prisoners as part of an amnesty. Suu Kyi said Tuesday that her party calculates that there were about 90 political prisoners among those released.

Between 200 and 400 political prisoners remain behind bars in Myanmar, according to different estimates.

Earlier this year, Suu Kyi visited Thailand, her first trip abroad since her release from house arrest, and then traveled to Europe, where she finally collected the Nobel Peace Prize she was awarded in 1991.

As part of her U.S. tour, she will visit Fort Wayne, Indiana, home to one of the United States' largest populations of Burmese expatriates. Since the early 1990s, about 5,000 Burmese have carved out a life there.

CNN's Ashley Fantz in Atlanta and Paul Armstrong in Hong Kong contributed to this report.