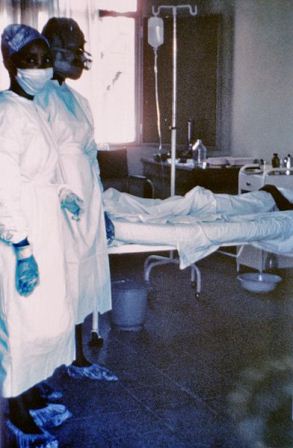 (CNN) -- An outbreak of Ebola hemorrhagic fever that has killed at least 14 people this month in western Uganda initially went undetected because patients did not show typical symptoms, according to the nation's health minister.

Patients had fevers and were vomiting, but did not show other typical symptoms, such as hemorrhaging, Health Minister Dr. Christine Ondoa told CNN on Sunday.

But diagnosis in an individual who has only recently been infected can be difficult since early symptoms, such as red eyes and skin rash, are seen more frequently in patients who have more common diseases, according to the U.S. Centers for Disease Control and Prevention.

The Ministry of Health declared the outbreak in Kibaale district Saturday after getting confirmatory results from the Uganda Virus Research Institute identifying the disease as Ebola hemorrhagic fever, Sudan strain.

Patients with symptoms of Ebola infection had been reported early in the month in Kibaale district.

A report from district health authorities said some people were delaying seeking treatment, in part, because they believed that "evil spirits" had sickened them.

"This caused civil strife among the community, requiring police intervention to quell the animosity," the Health Ministry said.

Medecins Sans Frontieres, also known as Doctors Without Borders, was helping set up an isolation center at Kibaale's hospital.

National health authorities say that in addition to the 14 deaths, at least six other people have been infected. Nine of the deaths were from a single household in the village of Nyanswiga, according to WHO.

A medic who had treated other victims is among the dead, Ondoa said.

Officials were trying to determine the extent of the outbreak, CDC spokesman Tom Skinner said Sunday. The Atlanta-based organization was sending about five people to join CDC staffers permanently based in Uganda, he said.

"These outbreaks have a tendency to stamp themselves out, if you will, if we can get in and ... stop the chain of transmission," he said.

Ondoa described the Ebola-Sudan strain detected in the latest outbreak as "mild," compared with other types.

The cases have emerged in Kibaale, where a national task force has been mobilized in an effort to stem the outbreak.

Though both patients had symptoms that included fever, vomiting, diarrhea and abdominal pain, neither had shown signs of hemorrhaging, the ministry said Sunday.

One patient suspected of being infected with the virus ran away from a hospital Sunday morning, but was tracked to her home and returned to the hospital in Kibaale, Catherine Ntabadde, the head of communication for the Uganda Red Cross in Kampala, told CNN in a telephone interview.

"The concern is where she could have gone to when she ran away," she said.

Health officials urged the public to report any suspected cases, to avoid contact with anyone infected and to wear gloves and masks while disinfecting bedding and clothing of infected people.

WHO did not recommend any travel or trade restrictions be applied to Uganda because of the outbreak.

The U.S. Embassy in Kampala issued an emergency message for U.S. citizens that said the outbreak appeared to be centered in Nyamarunda Sub County, Kibaale district, although one suspected victim is reported to have traveled to Kampala for treatment at Mulago Hospital, where he died on July 22.