Un: HIV Among Young People Going Down in Africa

LONDON — The number of young people infected with HIV in Africa is falling in 16 of the 25 countries hardest hit by the virus, according to a new report by a U.N. agency. 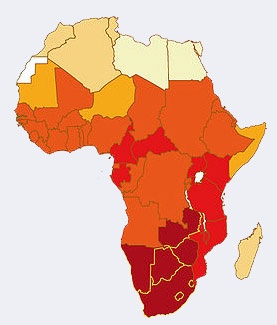 The number of young people infected with HIV dropped by at least 25 percent in a dozen countries, the U.N. AIDS report said. In Kenya, the infection rate among people aged 15 to 24 fell from about 14 percent in 2000 to 5.4 percent in urban areas.
The drop in HIV rates coincided with a change in sexual behavior, like having fewer sexual partners or increased condom used, UNAIDS said. But the agency could not say the drop was because of recent U.N. policies, which have mainly focused on buying AIDS drugs rather than preventing infections.
Some experts said new focus on prevention was too little, too late.
"Thanks to the U.N.'s strategic blunder, many more people are now infected than would have otherwise been the case had they focused on prevention much earlier," said Philip Stevens, a health policy expert at International Policy Network.
The UNAIDS data were based on population surveys and mathematical modeling, and come with a significant margin of error.

"Young people have shown that they can be change agents in the (AIDS) prevention revolution," UNAIDS wrote in its report.
The research provides further evidence the AIDS outbreak peaked more than a decade ago and that the disease is on the decline. In a report last year, the agency said the number of people infected with HIV had remained unchanged — at about 33 million — for the last two years.
UNAIDS also called for more money to combat the epidemic. In 2008, the world spent more than $15 billion on AIDS, with about half of that coming from the United States. In its report, UNAIDS said that "what's been good for the AIDS response has been good for global health in general."
But a study published last month found there was little correlation between U.S. money spent on AIDS and improvements in other health areas across Africa.
UNAIDS called for countries to invest more in their own HIV programs. It noted South Africa and Nigeria, two of Africa's wealthiest countries, receive the most money from international donors.
Stevens said that while some recent AIDS investments — like putting more people on drugs — have clearly saved lives, it has also distorted health spending. Despite only causing 4 percent of deaths, AIDS gets about 20 cents of every public health dollar.
"The same amount of money that we spend on AIDS could save many, many more lives more cheaply by vaccinating children or distributing cheap treatments for diarrhea," he said.
"Aid agencies have a responsibility to ensure they save the most lives possible with the amount of money they have available," he said. "Spending the lion's share on HIV clearly does not do that."