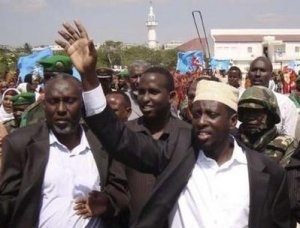 (GIN) – A report that claims that half the food aid to Somalia is routinely stolen by Somalia's own security forces, among other serious charges, has been roundly criticized by the Somali government.
"We find most of the allegations to be baseless," said a curt press release from the Prime Minister's Office. "The report also tends to damage the credibility and integrity of some prominent Somali businessmen."
Somalia's president, Sheik Sharif Sheik Ahmed said much of the information in the report "was not trustful" and "based on people on the street, not reality."
The 74-page report leaked to the press by the U.N. Monitoring Group on Somalia said up to half the food aid for needy Somalis was being diverted to a network of corrupt contractors, al Shabaab militants and local U.N. staff.
The charges come at a difficult time for the U.S. which is said to be preparing a military operation to shore up the U.S.-backed government of Pres. Sheik Ahmed, now believed to control only a sliver of the capital city, Mogadishu, whereas the insurgent group Al-Shabaab controls most of the country.
Assistant Secretary of State Johnnie Carson confirmed U.S. support of about $185 million for African Union peacekeepers, $12 million in direct support to the Somali transitional government, and $150 million in food aid.
"The amounts of money that we're talking about are really relatively small," he said at a press conference Friday where he denied any plans to "Americanize" the conflict.